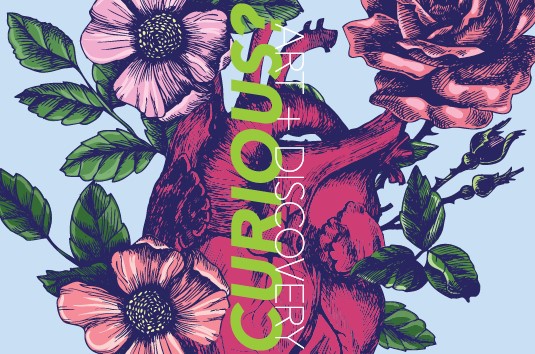 The Joan Sutherland Performing Arts Centre in Penrith has created a new space where art and science collide. CURIOUS? is a monthly series of art exhibitions held from April to July that features installations addressing a scientific theme explored by local artists and scientists.

The Joan is the lead partner in the Nepean Science Hub. With CURIOUS?, its foyer is transformed with interactive art installations using sound, digital projection, animation, photography and sculpture.

Each month will see a new installation introduced into this creative public space that will be inspiring and entertaining. Featuring playful interventions and topics that arouse the curiosities of both the art and science disciplines, CURIOUS? offers hands on activities and information resources alongside each installation.

CURIOUS? invites everyone to explore their curiosity.  Free admission, April to July 2018.

Fragile: 16 April to 7 May
Sustainability, biodiversity, urban environments.
The first installation in the CURIOUS series is Fragile, on show throughout April. Influenced by the tensions between botanical and artificial, Blue Mountains-based artist Emily Kaar joins Penrith City Council’s environmental science and ecologists, Andrew Hewson, Jenna Andrews, and Daria Rech to generate awareness of the perilous state of the natural world and the effect of humanity, sustainability, biodiversity and climate change on our local urban environment.

Code: 7 May to 28 May
Evolution, imapacts of DNA technology and genetic engineering.
In May, Code will explore the impacts of DNA technology, evolution and genetic engineering through a collaboration with video media artist Callum Howard and Western Sydney University molecular biologist Dr Mark Temple’s research into the sonification of DNA sequences.

Evolution is a mysterious machine. Based on simple rules, it tunes itself through selection of the fittest, but, rarely can the evolutionary process be observed before our eyes. Callum Howard, media artist and software developer, has created Ars Anima, an artificial life simulation with abstract, virtual creatures that live and die, adapting to a changing virtual environment in an accelerated genetic struggle to be the fittest survivors.

Ars Anima reminded molecular biologist, Dr Mark Temple, of the first time he looked down a microscope to see a hidden dynamic world of cellular organisms. He was fascinated that the behaviour of Howard’s digital creatures was based on principles of evolutionary biology. Intrigued, he sonified DNA sequences and used a computer tool to create an auditory display of DNA to accompany the Ars Anima visual simulation. His  digital creatures are programmed to respond to this audio display where you can now see how evolution is driven by changes to DNA code.

Hostile: 28 May to 18 June
Challenges behind space travel, the unbound hostility of space.
The unbound hostility and fragility of life in space will be unpacked in June with Hostile. The team from Western Sydney University Penrith Observatory, Dr Ain de Horta and Raelene Sommer, will look at the mysteries of deep space as they collaborate with local amateur astronomy groups to gain a tangible sense of cosmic and geologic time, distance and scale.

Curious? Visit The Joan’s atrium foyer now to see Fragile and Code, where through the aid of computer simulation it is possible to visualise the process of evolution. Proudly supported by Inspiring Australia and presented in partnership by the Nepean Science Hub in partnership with Penrith City Council and Sydney Science Park. Follow the Nepean Science Hub on Facebook