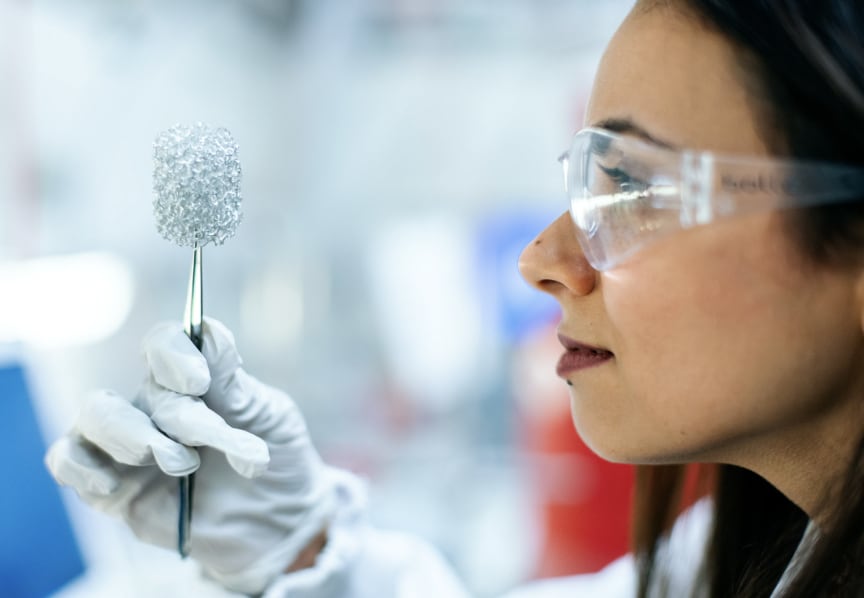 While academic studies investigate big questions and can solve global problems when new knowledge is taken to market, Australia still lags in its commercialisation of science and technology research developed in universities.

Inspiring Australia NSW is again partnering with Uniseed and Sydney Knowledge Hub to present a Spark Festival discussion on 15 October from 12 pm looking at this continuing shortfall and how academic researchers can be better prepared to create startups.

Meet three academic researchers who’ve started a business from scientific and technical research and are scaling their impact with impressive results. Hear from a venture capitalist and a university co-working space director to discover what assistance is on offer to researchers wishing to embark on the commercialisation journey.

CEO of SDIP Innovations, Dr Maryam Parviz has a PhD is Biomedical Engineering. She develops new bone implants for bone repair and replacement and has had a passion for creating medical devices since childhood.

“My mum used a hearing aid when I was a little girl. I always wanted a small hearing aid of my own – you know, one of those that are preferred for a discreet look. This technology was not available 25 years ago, when my mother was in her 20s,” she said.

Inspired to help her mum, Maryam chose to study Biomedical Engineering. She worked as a Quality Engineer for almost two years, running tests for customers, including startups. After she completed a PhD, Maryam developed her career in an ARC industrial hub at UTS, which allowed her to spend time with startups working on research translation.

“I have always stayed in the same space, although I never got into the hearing industry. The idea of my current company was initially developed by my co-founder to avoid removal surgeries,” she said.

With 33% of planned orthopaedic surgeries involving the removal of bone implants, Maryam and her cofounder developed and tested their commercialisation idea as part of the NSW Health-Medical Device Commercialisation Training Program. They formed a company, and 4 months later, Maryam left her university role.

“Our story is mostly a Reverse Engineering journey when I look back now,” she said. “The initial problem was brought to my co-founder’s attention by an orthopaedic surgeon in Westmead hospital, and the research was initiated to solve that issue.”

In scoping out their business, the pair conducted more than 150 interviews with surgeons, patients, and potential partners and market channels to identify the product requirements and customer demand. With strong technical knowledge and a scientific background, Maryam also trained herself in all aspects of the commercialisation side of business through participating in courses and gaining relevant workplace experience.

“In addition to completing the MDCTP program, I worked directly with startups during my post-doc,” she said. “I then completed the CICADA Innovation MedLab accelerator program for 4 months and had an opportunity to be incubated in San-Francisco.”

Maryam would like to see younger scientists provided with commercialisation training during their bachelor study.

“This understanding will shape their way of thinking when they are looking for ideas for doing different university projects or defining their thesis subject,” she said.

“During their postgraduate study, they may try to develop an IP, and their learnings from the past will impact their journey significantly. This will even change their way of thinking when they are planning about their career after graduation.”

The biochemist and molecular biotechnologist

Also in medtech, Professor Tony Weiss commercialised tropoelastin and founded a spinoff biotechnology company, Elastagen, from the University of Sydney. From 2008 to 2018, through ongoing research collaboration and further IP development through Tony’s lab at the University of Sydney, Elastagen, through its CEO and Board, raised $19,000,000 venture capital from investors in raised $19M in venture capital from investors in Australia, UK, Japan and South Korea.

The company also secured grant funding from renowned groups such as the Wellcome Trust in the UK and Australian grants totalling $6M, along with Ausindustry R&D tax credit funding. Tony’s inventions have since been recognised with 105 awarded patents in 22 patent families.

In 2018, Elastagen was acquired by Allergan plc, one of the world’s 20 largest biopharmaceutical companies, in a transaction totalling US$260M, one of the largest completed in the Australian life science sector.

Tony, who is an active mentor of up-and-coming entrepreneurs at the University of Sydney, believes that there are increasingly more academic researchers considering commercial pathways.

“It’s driven by a range of motives, a lot to do with getting lab funding but also because researchers increasingly want to see their discoveries translate into something that helps society “ he said.

Tony advises researchers wishing to commercialise their inventions to interact with like-minded colleagues at technology parks and incubators. And while not critical to starting a business, he believes it helps to have mentors and broad support from a university.

“I found support in having smart colleagues and mentors, accessing strategic networks and the right types of funding,” Tony said. “The university resources that were most helpful to me included having access to a supportive tech transfer office and senior staff, a great lab and people willing to back my strong desire to succeed.”

Dr Debbie Saunders is tracking wildlife using radio technology and drones. A Conservation Ecologist at the Australian National University, her research has focused on improving conservation of threatened migratory birds.

Debbie recently succeeded in translating her long-term research into a $1 million habitat restoration project. She has also been instrumental in the development of the world’s most advanced radio-tracking drone system for rapidly and remotely locating radio-tagged animals. This includes establishing start-up company Wildlife Drones, building up an expert team and translating a research prototype into viable product that can be used by endangered species managers, invasive species controllers and land managers globally.

As the recipient of multiple business innovation awards for her creative solutions for challenging research problems, Debbie believes that drones are a highly valuable and flexible tool that provide unprecedented opportunities for new insights into the world’s most complex and fascinating natural ecosystems. She came up with the idea for using drones to track wildlife because she had a research problem she needed to solve.

“I came up with an idea to address a research obstacle, and it turned out that others were also having the same problem!” Debbie said. “I was soon approached by people from all over the world who were interested in gaining access to the tech we developed.”

As a wildlife researcher facing what turned out to be a common problem, Debbie quickly identified a global market for her technology.

“Despite its strong market potential, our initial research project did not yield the support we were seeking from the university, so I developed networks through the innovation community in Canberra,” said Debbie who eventually achieved success for Wildlfe Drones independently from her academic role.

Some of the challenges Debbie initially faced in establishing her startup were educating herself on how to translate technology ideas into commercial products, finding the right combination of team members who were willing to work for free, and securing mentorship from experienced businesswomen.

In less than two years since she first secured investment funding, she is now scaling up her business and has expanded her team from 3 volunteers to 13 staff, while continuing to work part-time for the university on a $1m wildlife conservation project she secured based on her PhD research.

Hosting the Spark Festival discussion will be the Research for What? podcast creator Rom Bouveret, who is passionate about maximising research impact.

“In starting this podcast, I wanted to ask leaders why we do research and what they would change or keep if we could re-design our research activities,” he said.

“In my experience working for several years in managing research projects at UNSW, researchers can be better prepared for a career in a startup by meeting respected players in the research-entrepreneurship ecosystem – entrepreneurs, founders, investors, advisors and others who have followed that path before.”

Rom said researchers seeking to create a startup will benefit from talking with people who are familiar with the commercialisation process.

“This will not only save researchers months, or even years, but also money and stress, while affording them valuable new networks and even friends,” he said.

“There are increasingly more opportunities for researchers to train and acquire commercialisation skills. There are also trends that show an increase in investment in startup creation. So we need to hear these stories from researchers who are creating a positive impact on our communities!”

Joining the discussion will be Natasha Rawlings, an investor at Uniseed. She’ll explain what support exists to guide startup founders towards investment opportunities. Rupal Ismin, the Director of the Sydney Knowledge Hub co-working space, will also identify university pathways that can help scientific researchers along the commercialisation journey.

When: 15 October from 12 -12.50 pm
Where: Register for this and other STEM livestream segments here