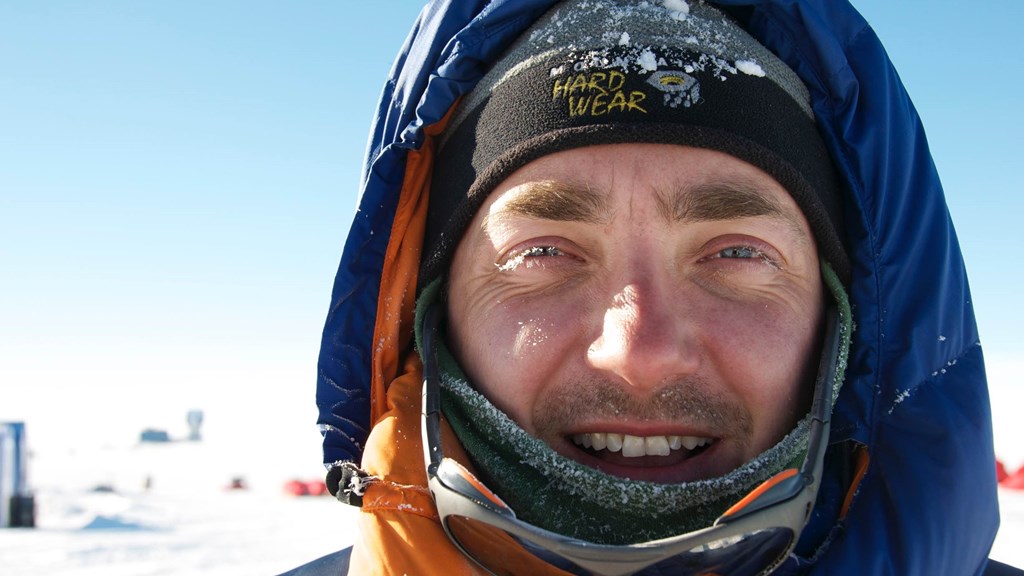 Join scientist, explorer and author Professor Chris Turney from 12.30pm on Wednesday 18 August in an online conversation with composer Brendon John Warner as they discuss a new work in progress: Sounds from the Ice.

Intended as a debut sound and image presentation to be presented live at City Recital Hall as part of This Sounds Like Science in National Science Week, Sounds from the Ice will take audiences on a fascinating journey through environmental change at the ends of the Earth.

While the live event is on hold due to Covid restrictions, Chris will discuss his quest to understand how past climates inform what we know about future change and how, working in the Antarctic, he is developing new records of past climate that extend historical weather records over millennia.

“The Antarctic is an extraordinary soundscape. I’ve never been somewhere where it can change so quickly from one extreme to the other,” said Chris.

“One moment you’re surrounded by the cries of the sea birds, the growling of sealions, and perhaps even a whoosh from a diving whale. The next all is calm, deafeningly so. And then your peace is shattered by howling winds and crushing ice. It’s a privilege to be allowed to visit, and a responsibility to share with others.”

When invited by Jackie Randles from Inspiring Australia NSW to participate in This Sounds Like Science, Chris was mesmerised by the idea of sharing these sounds with the public.

“It’s tempting to exhibit breathtaking images from the frozen continent. But the sounds from the ice are so often overlooked, unfairly so. This seemed an amazing opportunity to share a different perspective, something quite different to what people may have experienced before, a perspective that is so beautiful.”

Chris believes that by bringing together art and creativity, scientists can make an emotional connection with the public.

“To engage people with emotions, and to share an experience together means much more than a factual observation,”he said. “It’s by reaching out to the public and sharing discoveries in an imaginative new way, you hope, as a scientist, you’ve left a mark, an impression, that will stay with them, long after it was shared.”

Over the past few months, Chris has been collaborating with composer Brendon John Warner to create new musical compositions based on his Antarctic research.

In the online National Science Week conversation, they will describe their process and how they hope, with this new work, to improve public understanding of the impacts of future abrupt climate change in Australia and globally.

“Working with Brendon has made me revisit how I approach my research. I’ve always considered science communication to be central to the work I do, but the hauntingly beautiful work Brendon has created is adding an absolutely amazing layer to what my team and I are doing: the discoveries, the hopes, and the fears of what is unfolding,” said Chris.

“But it also reaches out to people from so many different backgrounds. The power of the composition is that it translates the science into a language that everyone can appreciate, reaching far beyond whatever I could hope to share in English. It’s been a revelation!”

Brendon has found the experience of collaborating with scientists equally rewarding.

“It’s been enlightening to have the privilege to work with a group of thinkers like Chris and his team who are working directly at the forefront of science and to capture their experience in music,” said Brendon whose earlier work, La fonte, took strong influence from the forces at play around human-induced climate change and sought to illustrate these issues sonically.

Brendon describes the experience as having been both energising yet sobering.

“As we’ve delved into the creative process, we’ve explored a range of concepts around the ice, from environmental factors and the massive influence the Antarctic has on global weather systems, through to wildlife and landscapes, and of course, the contemporary issues around climate change and the urgent need for preservation.”

What’s been most exciting for Brendon as a musician throughout this creative process has been the broad set of compositional tools to draw on to illustrate diverse but intimately related concepts.

“We’ve leaned on a series of images and sounds captured in the Antarctic to influence our creative decisions and I have been lucky enough to also be able to draw on some beautifully transportive field recordings from generous sound artists and scientists.”

Brendon has used field recordings in both a literal and metaphorical sense.

“We’ve literally woven some of the sounds themselves into the compositions in their raw form, while also using them in more subtle ways, either by taking small samples of sounds and using them as the basis for sound designing a synthesiser voice, or having them inform decisions around rhythm, space and form,” said Brendon.

“It’s been a wonderful experience working with such material at once both so very foreign from our day-to-day lives, but also so universally appealing and vitally important.”

All welcome to join Professor Chris Turney and composer Brendon John Warner as they discuss Sounds from the Ice in a special National Science Week online discussion to be introduced by Jackie Randles, Manager Inspiring Australia NSW, and facilitated by marine scientist and Deep Blue on My Doorstep podcast host Associate Professor Tracy Ainsworth.

When: 12.30pm on Wednesday 18 August
Where: Online event
Cost: Free with booking via this link

Australian Earth scientist Chris Turney is Professor of Climate Change and Earth Science at UNSW Sydney. His research cuts across traditional discipline divides, and is focussed on reducing the uncertainties over future projected change and their impacts. Learn more

Brendon John Warner is a composer and multi-instrumentalist taking influence from such diverse genres as sound-art, contemporary classical and electronica. Learn more

Marine scientist Associate Professor Tracy Ainsworth is Deputy Director Research, Centre for Marine Science and Innovation where she leads the coral reefs research group at UNSW Sydney. She is the founder and presenter of the Deep Blue On My Doorstep podcast. Learn more

This Sounds Like Science is curated by Jackie Randles, Manager of Inspiring Australia NSW and co-presented with City Recital Hall.