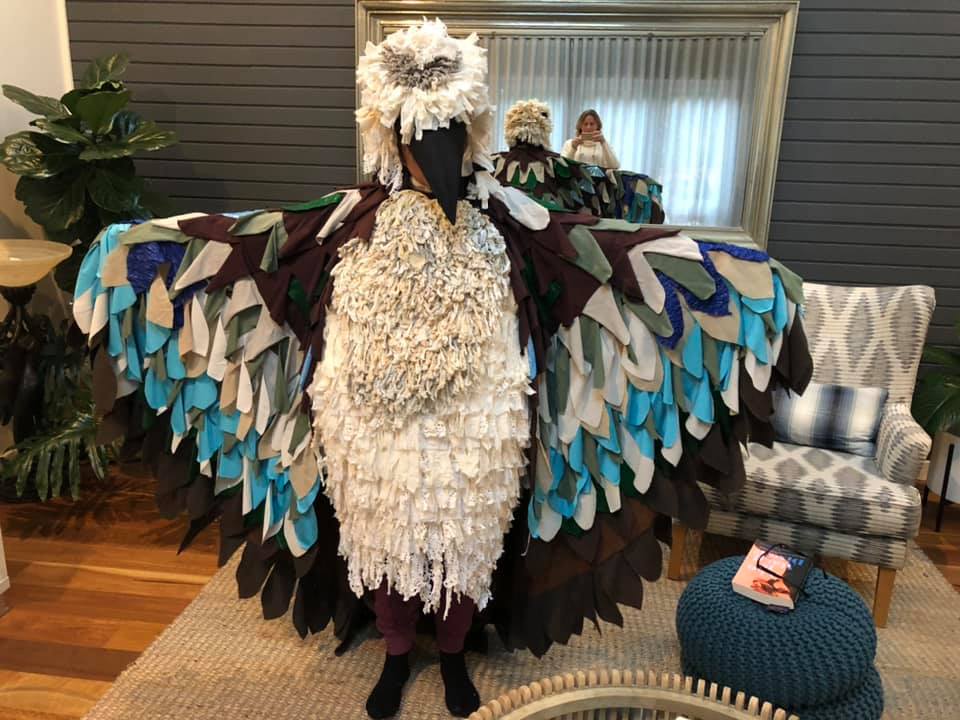 Eaton Gorge Theatre Company is located in the Illawarra on Dharawal and Wodi Wodi Country. Co-founder and CEO Juliet Scrine has written and performed over 40 different productions on sustainability themes from water conservation, reducing waste to landfill and healthier eating and lifestyles to protecting our natural environment. At the recent Art & Science Symposium as part of the Ecology Society of Australia annual conference, Juliet discussed three different environmental theatre projects looking at bats, cats and Squirrel Gliders.

The project took over 6 months to develop working with local scientists and ecologists based in the Albury Area.  We were taken on site to Burrumbuttock as well as known habitat located along the Hume Hwy between Gundagai and Albury.  We also spoke with the local men’s shed to learn about the perfect size of nesting box holes for squirrel gliders to protect them from predators and other larger possums.

Once the script was developed it was then reviewed by the scientists involved in the project to ensure all the science was correct.

EGTC has since toured this show to the Royal Botanic Garden in Sydney and the Australian Botanic Garden in Mt Annan. It has also toured in regional NSW with funds from K2 Glideways and was showcased at a regional eco arts conference.

In 2018, EGTC worked with the team at Centennial Parklands in Sydney to develop a performance to complement its education program around the importance of fruit bats.

There is a very large camp of the flying foxes at Centennial Park, and they are sometimes met with an unfavourable attitude, so EGTC developed a very funny interactive show called A a Bat’s Life. The play was then adapted into a video in 2020 for Georges River Council as an educational tool for residents as a part of a Halloween film night.

In 2021 EGTC was approached by K2Glideways to explore the impact of cats on the Australia’s wildlife and habitat. We were shocked by the research as we had no idea of the severity of the cat issue on our native environment.

So, using large amounts of scientific data collected on the issue we developed a play focusing on the cats and their natures and how it’s not the cat’s fault, its ours.

Read about A Catastrophic Story

As with all our shows we use large characters, bright sets, and lots of interaction to get the audience engaged and to encourage empathy by getting our young audiences to play the prey

We were only able to perform one show before the pandemic closed us down. Instead, K2Glidways and Saving our Species engaged us to produce three short videos and complimentary teaching resources that are now available to schools at no charge through the DART website that is run by the NSW Department of Education.  We are also available to run interactive online performances for interested schools

Why use art to get the message across?

The arts are emotive and engage an audience.  Once you have your audience smiling it is a lot easier to get your message across. In terms of how seeing and interacting with a performance affects the way we think about a topic, by being a part of a production and interacting as a character or by singing or playing a game, an audiences is impacted in a personal way. This creates empathy and can affect the way they feel about the issues discussed.

We haven’t done research , but we know we impact our audience by their smiles, their warm applause and by the comments we hear after our shows.

The performing arts are a wonderful way to communicate ecological messages to a mainstream audience.  Young or old!

This is an extract from a presentation by Juliet Scrine at the Art and Science Symposium of the 2021 Ecology Society of Australia Conference. For more information visit Eaton Gorge Theatre Company.