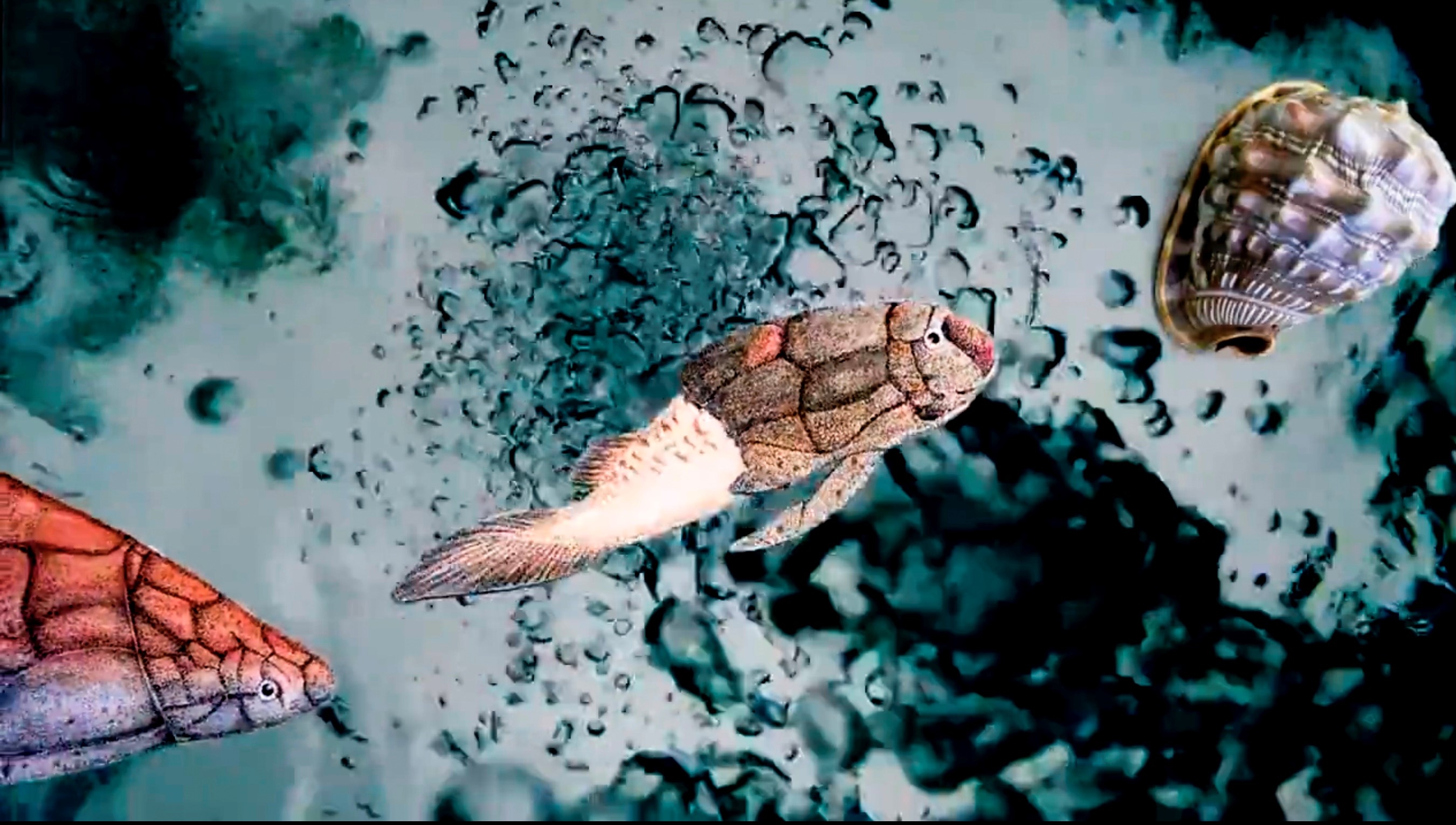 Participants learned illustration and digital animation techniques and then co-created an animated film based on Devonian creatures and habitats. The Devonian Billabong film was launched by the Australian Museum in February with an art/science panel event.

The aim of the four science week workshops was to bring science and art together with participants to learn to draw and make an animated film about the undersea creatures of the Devonian period. They inhabited Western NSW and have been archived by the Age of the Fishes Museum.

After a welcome from Meagan Warwick from the Australian Museum Research Institute, the CORRIDOR project’s Creative Director Phoebe Cowdery introduced the Devonian Billabong film project that she produced during National Science week 2021 with support from Inspiring Australia NSW.  This was the third science/creative iteration of the Devonian period that the CORRIDOR project has produced.

“The other two projects were created with artist Craig Walsh, titled Grossi with guidance from palaeologist Dr Alex Ritchie and the Devonian Aquarium,” she said.

“We have worked with artists Angus Fisher ad Todd Fuller on many previous occasions – they bring humour and guidance, steering participants in researching and gaining new skills in scientific illustration and stop motion animation. The result was collaborative, informative, explorative and kooky!”

“Our objective with Inspiring Australia’s Science Hubs strategy is to tell stories about science in ways that resonate with local community members, while sharing regional science experiences far and wide,” she said.

The CORRIDOR project convenes the Science Hub in the NSW Central West. For 8 years, the Orange Cowra Cabonne Science Hub has developed all kinds of creative projects that explore the region’s rich biodiversity, Indigenous cultural and scientific knowledge as well as engaging local science and technology experts in year round public programs.

“Like the Devonian Billabong, many of the projects Phoebe develops in partnership with artists, scientists and community members lead to the creation of new works and formats – films, sound recordings, workshops, talks and performances. This takes science to new audiences,” Jackie said.

“The Canowindra fossils are a huge source of pride for the people that live in the NSW Central West, and through this project, the CORRIDOR project has not only been able to engage people from all over Australia in their remarkable story, but also able to co-create a new work while imparting new creative skills to participants. The legacy value from a small event grant is huge!”

Artist Angus Fisher acknowledged the dedication of the workshop participants who over four days, worked hard on their drawings acquitting news skills in animation.

“This event happened in the height of lockdown: we were running it on Zoom and we didn’t know how it would turn out, so it was a bit of a nerve-wrecking experience in the beginning,” he said, remarking that the workshops delivered a fantastic result in terms of the experience for participants and the animation produced.

“The participants really seemed to enjoy it and in lockdown, it was almost the perfect time to do something like this. There was a lovely sense of escapism from Covid, and it was a welcome relief for so many of us as we got to cast out minds back 400,000 million years for a couple of weekends on the trot and really enjoy ourselves! It also had a lovely shared sense of engagement: it really did feel like we were all working in the same room together which is rare.”

Angus said that the four workshops had 100% retention rate from participants.

Angus explained how he provided participants with materials for inspiration – drawings, images of fossils and images of similar creatures. He then described how he taught basic drawing techniques.

Todd Fuller commented that the stippling technique participants used to create texture was very mindful: “Stippling helped us during the Covid period.”

After the group had spent days on developing their drawings, Todd asked them to literally cut them up with scissors in preparation for making the animation.

“One of the beauties of this workshop was that we all worked as we could at home – so we asked the group to hack a rig. Creativity is at its best when it is in response to serious limitations!”

Todd said that working with the group gave him a collection of unique animations depicting a series of intuitive moments.

“It was like we were creating a contemporary artwork with an immersive and suggestive ambient soundtrack. The final animation suggests things but does not say anything, it’s an artwork,” he said.

“I would never have imaged that the Zoom experience could be so special! I want to give mad props and mad praise to the group,” Todd said. “The reason this film is so successful is because of the time energy and commitment that everyone brought to this project.”

Todd and Angus thanked all of the participants for the time, research, dedication and enthusiasm they gave to the Devonian Billabong workshop.

Australian Museum palaeontologist Dr Matt McCurry then shared a brief history of the Age of the Fishes fossils that were discovered when a road worker uncovered a really important scientific specimen in 1956. He described how in the late 1960s, palaeontologist Dr Alex Ritchie wanted to excavate the site to explore more of these fossils.

“After that it really became a huge community effort to bring the fossils out of the ground and learn about them,” he said.

Learn about the Canowindra fossils

Feedback from participants was highly positive, with a few comments below.

“I am incredibly impressed how well Angus was able to teach the skills of stippling in the online class today. It was fascinating to learn about the finding of the Canowindra fish fossils and it is has been a thoroughly enjoyable process to try to draw them from the resources available. Can’t wait to go and visit the museum once we are allowed to travel again! Great fun.”

“Wow, very special on the first day of NSW full State lockdown to have live creative connection, terrific teaching and encouragement from Todd Fuller, a ‘natural’. We were taken to place that is much needed in our world, generosity, collaboration and creativity.”

“This projects work is urgent as it can comment on awe inspiring life forms and our current sickening planet. Perhaps by looking back on our evolvement as a species and of extinction and petrification, it is a call to action now. Much gratitude.”

Thanks to the CORRIDOR project for presenting this fantastic project and Australian Museum Research Institute for launching the Devonian Billabong film. Thanks also to the artists and to all the workshop participants who contributed to this film!