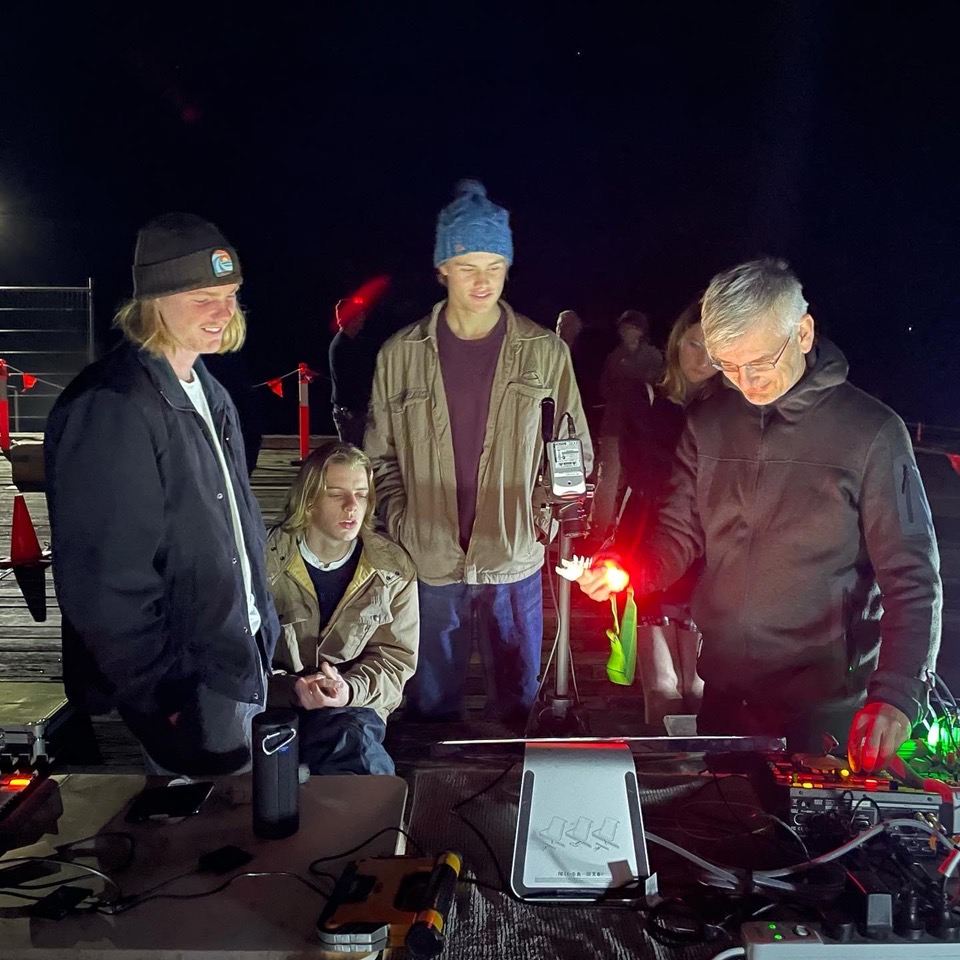 On a recent chilly night in Tathra, if you had wandered on to the historic wharf, you will have witnessed a wonderful moment as Atlas of Life and Inspiring Australia’s Our Place Our Species project participants gathered under the setting sun. They were joined by members of the Sapphire Coast Regional Science Hub and Sustainability Educators Network, Life Under the Wharf, Bournda EEC, plus various community groups to test a concept created by projection wizard Scott Baker and facilitators Navigate Arts, local musicians and synthesiser tinkerer Chris Korvin.

This pilot project called Bioluminescence is a spectacular VIVID style projection of marine life with all its glorious colour and fascinating creatures, onto the 160 year old shipping warehouse of Tathra’s historic wharf.

Using a 6000 lumen projector, images of the abundant sea life under the wharf flashed across the weathered boards, accompanied by music from Corinne Gibbons, while we were surrounded by the smells and sounds of the ocean beneath us.

Intrinsic to the project is a young Tathra woman called Minka and her dad Luke Hamilton, who on hearing about the wharf renovation lobbied Bega Valley Shire Council to mitigate the damage and effects of the renovation project and construction. Minka and Luke along with other local diving groups set out to investigate, document, collect data on and attempt to save as much of the rich marine life that exists on the under-water pilings as possible before the wharf renovation.

Attending the event was local Marine Botanist Nick Yee who has been advising the renovation project managers.

“It’s important to preserve as much of the existing life as possible for re-colonising when the pilings are removed and/or cleaned in the planned wharf refurbishment.” He commented that community led projects like the Under Wharf data collection “help people feel like they’re doing something, that they are being proactive,” he said.

Scott Baker of Bermagui projects images onto all kinds of buildings and objects, and he was surrounded by young people wanting to have a go on the software, Heavy M, so they could map onto the beautiful old Tathra Wharf building.

Mr Baker said Bioluminescence is the perfect intersection of science and art.

“Even better is that Bioluminescence is grass-roots and community led. Tathra locals shooting video under their wharf to share the biodiversity of life living on the wharf pylons. In the true spirit of ‘as above, so below’, the idea was to take the video and images and projection map them onto the wharf building.”

“With a limited budget the decision was made to utilise locally accessible technology and push forward with a creative development to test the hypothesis of the idea.”

“Another half a dozen worked with us on the wharf deck learning the video projection mapping process the building was mapped and the prototype was successfully delivered.”

“The team are now seeking funding and support to deliver a larger public event for the community by the community.”

On the night, a couple of the fishermen wandered over to ask what was happening and where the beautiful images came from… “from right under our feet, right under these boards!” was the answer. The looks of surprise on their faces was priceless and somewhat satisfying. The huge illuminated images had worked their magic.

Inspired by Sydney’s spectacular Vivid Festival, Bioluminescence uses projections to create a stunning visual display of what’s been found and what is being done to protect this precious ecological community.

Participants learn about projector technology and terminology such as lumens and throw distance. They are also introduced to software used to map or define different areas of a projection on the wharf building, and have an opportunity to play with the amazing photos and videos shot underneath the wharf, as well as learning how to incorporate live music and voice to the audio-visuals, creating a fully immersive artistic experience.

The team involved in this exciting creative development project are now working towards creating a suite of larger, multi-media events at Tathra Wharf and across the Bega Shire later in the year as part of the Our Place Our Species pilot project supported by Inspiring Australia NSW.

Also on the program later in the year will be a community bioblitz event led by the Atlas of Life in the Coastal Wilderness and members of the Sapphire Coast Science Hub and Environmental Educators Network.

Images and guest post by Lisa Herbert. The Sapphire Coast Science Hub and Environmental Educators Network is supported by Inspiring Australia NSW. If you would like to learn more or get involved, please contact Libby Hepburn at libby@atlasoflife.org.au