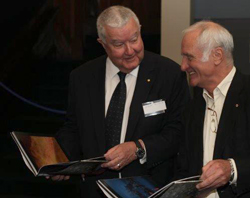 In launching the paper entitled Science, Technology, Engineering and Mathematics (STEM) in the National Interest: A Strategic Approach at the National Press Club, Professor Chubb argued that Australia was at risk of falling behind if we leave STEM enterprise to chance:

“What sort of Australia do we want? Do we want to build one that provides the coming generations with the opportunities and the lifestyle that many of us have enjoyed, or do we not particularly care?”

“Do we accept that we can plan a better future than we might otherwise have? Do we want to position Australia securely in a competitive even hostile world? Or do we lapse into some sort of torpor based on the delusion that if the past was OK, and the present isn’t too bad, then the future will look after itself?”

Professor Chubb used the occasion of National Science Week to elaborate on ideas proposed in his position paper at several events across Australia during the campaign period.

In Sydney, Professor Chubb was a guest at a luncheon convened by the Committee for Economic Development and RiAus at which he warned that young people in schools and universities are not acquiring the STEM skills we need for our future.

Professor Chubb referred to many well-developed STEM strategies in 16 countries, including those in the European Union, China and the United States, to argue that without a sense of urgency, Australia runs the risk of being left behind. Further, two thirds of those countries with STEM strategies in place also have overarching bodies to coordinate strategic programs.

At the launch of the Australian Museum Science Festival, Professor Chubb repeated his call for Australians to act strategically to prepare the future they want rather than simply persuading ourselves that what we do now will be good enough. He endorsed the importance of raising community awareness of science and its importance to every day life and urged all in the room to consider some of the long-term proposals outlined in his paper.

With four elements comprising education, new knowledge and a continuous flow of new ideas, and innovation and influence, Professor Chubb’s position paper calls for a social compact with the community so that the maximum benefits will flow to it from the Australian STEM enterprise.

Professor Chubb argues that we must think and act more strategically about Australian STEM and its quality at all levels. STEM enterprises must also engage with the business community more effectively and build partnerships to identify opportunities and deliver solutions that will drive innovation.

In a joint opinion piece published in the Financial Review and co-authored with the CEO of the Business Council of Australia’s Jennifer Westacott, the authors argue that the most important thing Australia can do is to put in place the systems and structures that encourage every individual to realise their potential and equip students early in STEM.

“Australia needs to prepare our young people with the education, skills, competencies and attitudes that set them up for a rewarding working life where they can both contribute to, and benefit from, a strong economy.”

The authors also called for stronger collaboration between researchers and industry to foster and drive innovation.

“Innovation can only flourish when people and organisations have the requisite skills and abilities, and when they operate in an environment that provides them with the scope and incentive to collaborate and innovate,” they said.