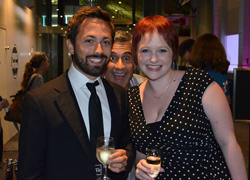 When Science Alert joined forces with the I F****** Love Science (IFLS) Facebook page and announced there would be an IFLS Live! party in Sydney at the Powerhouse Museum, fans were falling over themselves to get tickets.

The event sold out almost as soon as tickets went on sale despite publicity being limited to announcements made on Facebook and Twitter: 500 were gone within 40 minutes and a further 100 went as soon as they became available.

In terms of numbers, general excitement and media interest, this entertaining and informative geek fest was a standout success for National Science Week. The success of IFLS Live! very much affirms that science is indeed awesome and worth celebrating.

The idea for an IFLS Australian tour arose during a casual conversation in London between Elise Andrew, the 23 year-old, UK based biology graduate who founded IFLS and Chris Casella who founded the Australian website ScienceAlert in 2006 with Julian Cribb.

ScienceAlert aims to fuel public understanding of science and to celebrate science as a vital part of our culture, both here in Australia and beyond. It publishes science research outcomes, articles and opinions and has a jobs directory.

With almost 3.6 million likes for its Facebook page, ScienceAlert is by far of the most popular Australian social media platform dedicated to science. (To give you an idea of scale, ABC Science’s Facebook page had 36,730 likes at the time of writing).

But its popularity (and that of other science related platforms) continues to be dwarfed by IFLS, a page that today has almost 6.7 million fans.

In contrast to ScienceAlert, IFLS explores the lighter side of science, bringing quotes, jokes, memes and anything Elise Andrew finds awesome and strange to the masses in an amusing and accessible way. IFLS arose from Elise’s habit of sharing science snippets she found interesting and amusing on her personal Facebook page. A friend suggested she make the page public and within a day the page had one thousand followers.

Elise sees IFLS as a means of piquing interest.

“I’m just trying to point people to different places on the Internet where they can find out about really cool things,” she said during one of the numerous interviews she did while in Sydney.

Over the past few years, Chris Cassella established relationships with Elise Andrew and other popular YouTube and Facebook science presenters.

“The invitation for them to come and present at an Australian party was an easy sell,” he said. “I made it even more enticing by offering that they could also bring their partners and visit the Great Barrier Reef.”

Despite Chris’s confidence that this kind of event would take off, securing fundraising support was a challenge.

Many ScienceAlert supporters contributed to the IFLS tour, but Chris had missed deadlines for National Science Week funding as well as other grants from regional governments and tourism organisations. Nevertheless, the tour went ahead as planned, with satellite events featuring many of the presenters arranged in Canberra and Townsville.

One of the sponsors was ANSTO, whose Strategic Events and Partnership Advisor Dr Michael Zettinig said that the calibre of invited speakers was the drawcard for them to get involved.

“IFLS Live! was an opportunity to reach a highly engaged audience that love science, some of whom might one day contribute to the future of ANSTO,” he said. “The ANSTO scientists who participated on the night absolutely loved what the event represented and the interest shown in their research was highly rewarding for them.”

“Once the word was out, all the Australian guest speakers, volunteers and sponsors were very keen to give their time, jump on board and make it happen,” she said. “We actually had to turn down good speakers and performers who offered to appear, as the event was already four hours long.”

“We had plenty of interesting things happening in the breaks and this gave the sponsors a presence that was much bigger than just having their logos displayed,” said Frankie.

With a team of experienced professionals producing the show, including technical and event staff from the Powerhouse Museum, a live social media producer and a stage manager from a commercial TV show, everything ran smoothly on the night.

“You have to pay professionals to make a big production work, and we also had a well-written script.”

Frankie said it was a pleasure to work with the dozens of people involved, then to hear comments from the audience, sponsors, scientists, performers and venue staff afterwards saying what a great, fun and interesting event it was.

“The event made a huge impression on the Powerhouse Museum’s new Director too,” she added.

In terms of who paid $35 to attend IFLS Live!, Chris said the crowd appeared to be young professionals who were interested in science. The event was also lived streamed to an audience of just under 5000 people and a Twitter stream was active throughout the night.

“Science is much more popular than people realise,” said Chris. “You just have to have the right venue and talent. We could of sold thousands of tickets.”

Watch highlights of IFLS Live! on this video produced by UNSW TV.