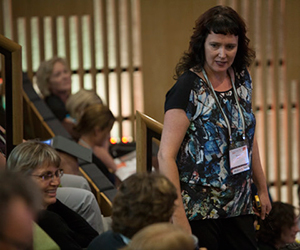 Australian Science Communicators (ASC) is a network of people working in science and technology communication across Australia and overseas. Its annual conference in Brisbane last week marked twenty years since the organisation was created in 1994, providing a forum for practitioners to come together, share ideas and learn from past experience.

Among over 400 delegates were journalists and broadcasters, freelance writers and bloggers, scientists, illustrators and film-makers, teachers, science communicators and marketing professionals working for research organisations, laboratories and universities.

Addressing the themes of insight, impact and innovation, most sessions identified practical ways to improve the way we communicate science with our many and varied audiences. Other sessions looked back on the past 20 years of science communication as a profession and celebrated the ASC’s achievements.

The opening keynote address by Professor Ian Lowe set the scene by examining the changing role of science communication and the context in which today’s audiences receive and respond to information.

“When science was seen as a body of secure knowledge, the task of the communicator was straightforward: understand the science well enough to explain it clearly and simply, then craft the explanation.”

Professor Lowe argued that we now understand science as a process of successive approximations to an understanding that will always have limitations and uncertainties: “islands of understanding in an endless sea of mystery”. This means that today, science communication requires us to distinguish between what is known with confidence, what is thought probable but uncertain, and what remains unknown.

Rather than providing all the answers, science is a process of discovery. In reminding us that science is not a body of “eternal truth”, Professor Lowe showed how the fact that science can be proved wrong breeds public distrust. This in turn can fuel a backlash against science from those whose interests or ideology are threatened.

Professor Lowe considered the role of fear in whipping up anti-science mistrust and stressed that values and beliefs that shape thinking and understanding have a critical influence on audience opinion.

The importance of understanding audience values was a recurring theme throughout the three-day conference, particularly in sessions looking at campaigns that inspire behaviour change.

The conference dinner featured an address from science broadcaster Robyn Williams, who shared stories from his long and varied career and presented the 2014 Unsung Hero of Science Communication Award to CSIRO’s Craig McCormack.

Craig is currently the National Operations Manager for CSIRO Education and was recognised for two decades of engagement and impact across the broad spectrum of science communication. Within the scientific and communication community, Craig’s biggest impact has been in demanding more evidence-based rigour in science communication practice.

Craig has also been instrumental in community engagement and improving communication practices around contentious technologies (e.g. nanotechnology) and challenging areas of science, such as climate change.His acceptance speech took the form of a ‘science rap’ and name-checked his experiences, influences and science communication heroes.

The Unsung Hero Award presentation was followed by Sci.Com.gets emotional, a cabaret produced by science communicator, Dr Phil Dooley, who played the piano, sang and performed a science fairytale.

After that, pseudo-Scot Professor Flint (aks Michael Mills) had the whole room singing about dirt and bones and dancing Scottish style. Next up were Dr Graham Walker, who performed experiments using everyday household chemicals and had the ASC executive firing marshmellows into his mouth, and David Cannel whose stories about the sexual exploits of wombats and molluscs provoked a mixed response. A last minute performance from rapper DiploD (aka biologist Dr David Wong) provoked enthusiastic participation from the crowd.

Congratulations to Australian Science Communicators for a terrific conference that was infromative, fun and inspiring. If you are not a member, consider joining this international network dedicated to improving the way we communicte science.

All conference sessions (including the dinner) were recorded and are available as podcasts.

The best way to find out what is covered in each podcast is to look at the conference program, where you will find information about topics covered, detailed abstracts and speaker biographies.

You can also read a log of session Tweets on Storify.