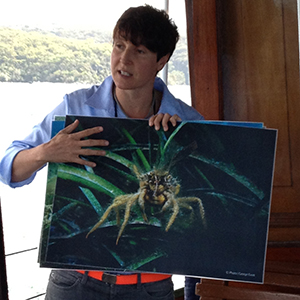 Sydney Harbour is an Australian icon that is admired, cherished and part of our everyday life. But rarely do we look below the surface where kelp forests, sweeping seagrass meadows, rocky reefs and sponge gardens provide food and shelter for an astonishing array of creatures – some plentiful, some rare, some celebrated and some feared. Now you can discover some of the Harbour’s underwater secrets with an expert marine scientist from the Sydney Institute of Marine Science (SIMS).

The Sydney Harbour Research Program is SIMS’ flagship research project that focuses on understanding the effects that the many activities now conducted in and around the harbour have on the diversity and the natural processes that underpin ecosystem resilience. SIMS has developed an interactive and innovative outreach activity to showcase its research.

Underwater Secrets – Sydney Harbour Revealed is an exciting harbour cruise aboard Lady Hopetoun, a 1902 steamship and the flagship of Sydney Heritage Fleet. Once aboard, visitors will enjoy a running commentary by expert marine scientist, Dr Inke Falkner and discover some of the Harbour’s underwater secrets.

Where better than on the water itself to learn about the extraordinary underwater world of Sydney Harbour, get an insight into the issues of a highly urbanised estuary and learn about past and present marine science in Sydney.

With a surface area smaller than Manhattan, Sydney Harbour is home to a greater diversity of fish than the entire Mediterranean or the coasts of New Zealand and Great Britain. How is this possible? An extraordinary geological past and an unusual set of circumstances have resulted in Sydney Harbour’s incredible biological diversity.

The next Underwater Secrets – Sydney Harbour Revealed cruise will depart from the Australian National Maritime Museum pontoon at 10.15 am on Thursday 20 March.

Our marine and coastal environments are facing an unprecedented range of pressures, including climate change, invasive species, and urbanisation. Forecasts of the impacts of these rely critically on our understanding of ocean and coastal processes.

Sydney Harbour and the adjacent NSW coastal waters are some of the world’s most iconic waterways, providing a wonderful living environment to many of Sydney’s population. They also support significant economic activity.

However, the population of Sydney is projected to increase by 50% over the next forty-five years to around seven million. Moreover, the East Australian Current is gathering strength right on our doorstep, making Sydney and eastern Australia a climate change hotspot, with the temperature in parts of the Tasman Sea increasing at a rate of 2° in less than a century.

These changes will continue to add significantly to the pressures upon our marine environment with as yet unknown consequences.

SIMS’ research will provide the knowledge to enable us to manage our marine environment in the best possible way to ensure that its beauty and productivity are maintained for the benefit of future generations.

The Sydney Harbour Research Program is a broad-based research project that seeks to identify, preserve and enhance the resilience of those species and habitats in Sydney Harbour that have high ecosystem and conservation value, and to enhance the capacity of relevant government departments to make key management decisions regarding the Harbour.

The Integrated Marine Observing System is a $100 million Australia-wide program that is studying the oceans that surround Australia. SIMS operates the NSW node of IMOS and deploys a wide range of equipment in the ocean to gather information that is made available free of charge to anyone wishing to use this data.

All levels of the marine food chain are impacted by changes in the ocean. IMOS is delivering valuable data that is helping us to understand our marine biodiversity. SIMS operates the Australian Animal Tagging and Monitoring System (AATAMS) that monitors the coastal and oceanic movements of marine animals from the Australian mainland and down to the Antarctic.