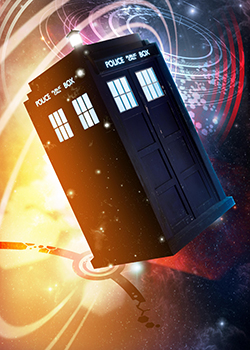 Have you ever wondered if all that timey-wimey stuff was actually possible? That’s the question posed by the new show The Science of Doctor Who, presented by RiAus in association with BBC Worldwide Australia & New Zealand.

The Doctor Who phenomenon needs no introduction, having first appeared on television over 50 years ago. The epic adventures through space and time of the Time Lord from Gallifrey, known only as The Doctor, and his companions have captivated audiences with its melding of adventure, drama, wit and history. And while it may be classified as science-fiction, the show actually explores some interesting real science concepts.

In the live event The Science of Doctor Who, comedian Rob Lloyd is joined by eminent scientists – who also happen to be Doctor Who fans – to explore some of the amazing science-reality behind arguably the world’s favourite science-fiction show.

Using scenes from the series, a sense of adventure and a big dose of fun, the event will look at time travel, regeneration, teleportation and just why the TARDIS is bigger on the inside. It will also tackle other scientific mysteries and allow the audience to ponder some of the big Doctor Who questions along the way.

Using smart phones and tablets, the audience will also be able to interact throughout the show by shaping discussions and participating in special games like the popular ‘Monster Showdown’. For years, Doctor Who fans have argued about which of the show’s monsters is supreme and would eventually take over the universe, unless thwarted by The Doctor.

For the first time, fans will actually have the opportunity to answer that question as The Science of Doctor Who pits each alien again the others in an interactive quest to find the victorious monster.

A unique aspect of this show is that it is written by and for Doctor Who fans. It is also of interest to those who while not necessarily fans of Doctor Who, possess a keen interest in the universe.

The result is a unique live show that is equal parts fun, adventure and science, presented in a way never seen before.

The Science of Doctor Who touches down at the Seymour Centre in Sydney from 23-25 May. The tour also visits Perth, Brisbane, Adelaide and Melbourne. For more details and ticket information check out www.riaus.org.au/doctorwho.