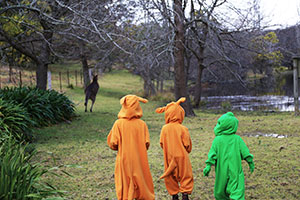 It’s been a big year for Inspiring Australia!

More than 40 NSW schools joined the 2014 celebrations, many exploring this year’s theme: Food for our future: Science feeding the world, a topic inspired by the International Year for Family Farming. With activities covering issues like food security, agricultural sustainability and innovation, students were encouraged to consider the central role of science in putting food on the table.

Next year’s schools theme, Making waves – the science of light, marks the International Year of Light. All are encouraged to join the 2015 celebrations that kick off on 15 August. Visit www.scienceweek.net.au to learn more.

Across NSW, Inspiring Australia’s growing network of Regional Science Hubs has united more than 200 businesses, government organisations, schools, researchers, universities and community groups over the past 18 months who are now working together to deliver local outreach initiatives in their regions.

New science engagement experiences continue to be developed by Hubs across the state, including major community festivals and exciting hands on activities. There have been several science/art exhibitions held in regional galleries including a project to discover the world of ants in Armidale and the hugely popular Neural Knitworks project that created a giant brain made from hand made, textile neurons. Other projects have explored astronomy through film-making and combined Indigenous perspectives with Western science.

Science Hubs in the Shoalhaven and Far South Cost regions have also delivered BioBlitz events. These biodiversity surveys led by professional scientists work with citizen scientists to identify a region’s flora and fauna.

Recently, Science Hub members from across NSW gathered in Sydney for a 2-day Leadership Forum to co-create a vision for what we seek to achieve over time as local catalysts implementing a national strategy for engagement with science. The Forum considered long-term strategies for how Science Hubs can engage their communities and attract partners.

The University of Sydney plays an important leadership role in the Inspiring Australia strategy in partnership with the Commonwealth Department of Industry, the Office of the NSW Chief Scientist & Engineer and the NSW Office for Science & Research. Together the outreach efforts of Inspiring Australia (NSW) continue to help raise awareness of the important contributions scientists make to the community and we look forward to another year of promoting the relevance of science to everyday life.

If you would like to help increase appreciation of science in your community by getting involved with one of our many NSW Regional Science Hubs, or even by creating a new Hub, please drop me a line: jackie.randles@sydney.edu.au