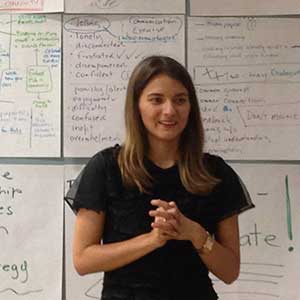 Why do some online channels attract fans while others don’t? With more than 5 million unique visitors to its website each month, Science Alert has grown from humble beginnings five years ago to become one of the most visited online science platforms. Science Alert’s Editor and Partnerships Director Fiona MacDonald shares tips for developing and keeping online audiences.

Science Alert is a website that aims to share knowledge and promote science. Its Facebook page, established in October 2007, has over 6.1 million fans today, and there are more than 20,000 fans on Twitter, Tumblrand Instagram. More recently, around 3,000 people have attended Science Alert’s live events.

Fiona MacDonald was a guest presenter at the 2014 NSW Regional Science Hubs Forum where she generously shared information about how Science Alert has successfully used social media to create and nurture its online community. In the early days, Fiona said that the website and Facebook page were reaching a traditional science audience; people who may have studied science or had some scientific knowledge. But the site was soon discovered by a huge audience of non-scientists who responded enthusiastically to scientific information – particularly to breakthroughs and good news. Amazing and hopeful science stories began to generate huge amounts of traffic, and the team developed a strong following of people looking to share this kind of content. In response, Science Alert developed a unique voice that prevails today.

“We offer science stories in a way that someone might share information in conversation at a dinner table,” said Fiona. “We talk about science in a tone of voice that all kinds of people can relate to. We want to keep the excitement alive and we don’t talk down to our readers.”

Tone of voice is something that Fiona said is really important for any brand and she urged Hub members to think carefully about how they wish to come across and what communication style they will adopt. Once a tone of voice is established, it’s important to stick to it so that people know what to expect from you. In terms of how to create a community and keep people coming back, Fiona’s number one tip is to know your audience. Science Alert’s community is everything – a means of driving traffic to the website and the basis of its revenue. Today Science Alert works with several university and research clients who pay to be featured on its platforms so that new audiences can link back to them for more information. So it’s important for the team to understand what their audiences want and to consistently deliver content they are interested in.

“Think about why people would come to you. Who might be interested in what you are doing? What else do they like to do? What kinds of other sites might they be interested in?” she asked. Fiona said to consider what groups you can collaborate with and tap into what others are already doing to capitalise on common interest. When thinking about who else could help spread the word, Fiona recommends visiting popular sites that my be relevant to what you are trying to achieve and becoming familiar with what the people you would like to attract are doing and saying online.

“Join the conversation and be sure to comment as your Hub’s page,” she said. Fiona also recommends proactively targeting popular sites and offering to share their content if they would do the same for you. By sharing someone else’s content, you will attract new audiences who may be interested in what you offer. This kind of cross promotion is particularly useful for Science Hubs that are seeking new partners.

“Partnerships are key, and they can be mutually beneficial,” she added, and recommends asking Facebook fans directly what they are interested in and what they would like to see.

“Give your fans plenty of opportunities to share their opinions and post information about themselves and their interests, and throw in some incentives for posting. The more people exchange comments on your page, the better your rankings will be and the more people will see your posts. The content you share does not have to be your own either, and a good image will always help.”

Fiona says that appealing photos are one of the most important content elements. Images that are colourful work best and they will stand out in people’s timelines.

“Colourful images are great but on Facebook trends come and go. A few months ago, stylised infographics were popular. But we have noticed that recently people tend to prefer more realistic science images, so we are now going for images that are more authentic,” she said. “You need to monitor what works and what doesn’t and just experiement.”

When a post takes off and achieves lots of shares, Fiona recommends you take note so you can post similar kinds of posts in the future. In terms of paying for promotion of Facebook posts, Fiona warned that this strategy can be hit and miss. While a few years ago she would have recommended paying for sponsored posts, today she says you are better off boosting high-ranking posts as soon as they become popular.

“The best approach seems to be paying to boost popular posts as soon as they take off. This can be really effective. But remember that Facebook’s algorithm is changing constantly, so it is hard to keep ahead of the game. It’s a process of trial and error.”

Fiona said that direct sharing, or hashtagging, is another highly effective way to extend your reach. To do this you put the @ symbol before you type another Facebook page name. That way you will appear on the other page’s timeline. Fiona said that Science Alert uses this technique to leverage trending topics, ensuring that it posts comments that link back to them.

In terms of how many times you should post, Science Alert posts about nine times a day. However, depending on what kind of group you are, Fiona recommends not posting too much in case fans decide to turn off your feeds into their timeline. It’s important to be consistent whatever you decide to do, and scheduling posts on Facebook can help you plan out your week. In summing up what is most important, Fiona says it is your reputation for sharing quality content.

“If you become known for consistently sharing high quality content, you will build trust and a loyal following,” she said. “And don’t compete! Use your social channels to share and acknowledging others appropriately. There is room for all of us online.”

Many thanks to Science Alert’s Editor and Partnerships Director Fiona MacDonald for sharing these online tips.