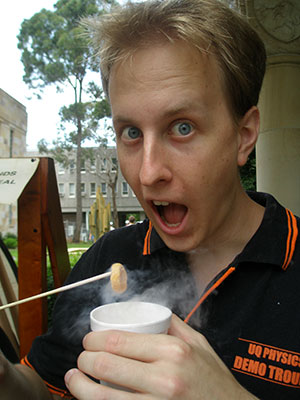 Dr Andrew Stephenson is a Brisbane-based science communicator who has spent much of his career finding ways to spark more interest and engagement with science. In addition to creating science-based public events and helping produce science-related television, he has personally performed science demonstration shows and workshops for over ten thousand school students all over Queensland and the Northern Territory. Andrew’s new public event series, The Science Nation, promises to provide educational entertainment that makes you laugh while you learn.

This ambitious project marks a new challenge for Andrew whose active participation in science outreach goes back to the very early days of being a student in astrophysics and later, making superconducting plastics for his PhD at The University of Queensland.

“During my time as a student I was very active in science outreach, winning awards and competitions for my science outreach and communication,” he said. “Through my science demo shows and workshops I have been able to share my enthusiasm for science with kids in every corner of the state, and was even lucky enough to take liquid nitrogen to the Simpson Desert!”

In recent years Andrew has worked on several television shows, including Wild But True, Lab Rats Challenge and The Shak. He was named Queensland Science Champion by the Queensland Government in 2014 in recognition for outstanding achievement in leadership in science communication through delivery of science outreach programs across Queensland.

From 2009 to 2014, Andrew organised a public lecture series in Brisbane, which included some larger special events that had a bit more of an entertainment factor than the regular public lectures.

“After seeing the strong interest in bigger events, I decided to create my own public events series that could tour nationally and this is how The Science Nation was born,” he explained.

Andrew said that The Science Nation promises to provide educational entertainment that makes you laugh while you learn. Its first event, The Storytelling of Science, will tour through Brisbane, Sydney and Adelaide in May.

“The event is about sharing science, having some laughs and eating a bit of food. It explores the different stories science has to tell, and the different ways those stories can be told. In our modern world attention spans are shrinking, and engaging others with science is getting harder, but does this have to be the case?”

“Whether it is Archimedes taking a bath or an apple falling on Newton’s head, stories are far more engaging and easier to remember than the facts science has to offer,” Andrew added.

Sydney’s storytellers will include:

Sydney event details
The Storytelling of Science is presented by The Science Nation.

When: 2-5pm, 16 May 2015
Where: Sydney Powerhouse Museum, Ultimo, Sydney.
Cost: $20 online, $25 at the door
Refreshments: There will be an intermission where afternoon tea will be served.