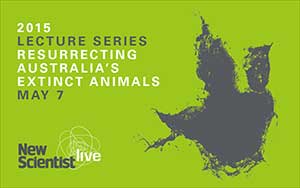 New Scientist is a weekly science and technology magazine offering the latest news, ideas and opinions on all matters related to scientific and technological innovation. Since 2013, New Scientist, under the New Scientist Live banner, has been running sold out lectures in London, Sydney and Glasgow, bringing science to life, inspiring new ideas and challenging views of the world as you know it.

In 2015 New Scientist Live is launching a series of four captivating lectures in Sydney. Experts in their respective fields will delve into some of the most exciting ideas of today, challenge the status quo and explore what the future – and distant past – really looks like.

Resurrecting Australia’s extinct animals is the first of the exciting lectures to be held in Sydney this year.

Palaeontologists Mike Archer (University of New South Wales) and Steve Salisbury (University of Queensland) will discuss how we can understand the behaviour of dinosaurs from analysing their fossilised footprints and whether Australia’s lost animals, such as the Tasmanian Tiger, can be brought back to life.

The lecture, which will also allow for questions from the audience, will be held at The University of Sydney Footbridge Theatre on 7 May from 6:30pm – 8:30pm.

Other lectures in the 2015 New Scientist Live series include:

The fishy origins of sex – 9 July
Sure, sex is fun but it seems like an inefficient and messy way to reproduce. Evolutionary biologist Rob Brooks (University of New South Wales) and palaeontologist John Long (Flinders University) explore how sex evolved and why fish hold the answers.

Quantum computing and teleportation – 20 August
As part of the Sydney Science Festival to mark National Science Week 2015 expert physicists Michelle Simmons (University of New South Wales) and Ping Koy Lam (Australian National University) will discuss teleportation and how its powers are already being harnessed to build game-changing technologies. A future with unimaginable computing power and unbreakable security is being created in the labs of these two scientists. And it might be only a decade away.

The origins of modern humans – 28 October
The unexpected discovery of a new extinct human species recently complicated questions about what we are and where we came from. Ancient DNA specialist Alan Cooper (University of Adelaide) and evolutionary biologist Darren Curnoe (University of New South Wales) will elaborate on how and why traces of DNA from the extinct species can be found in each of us today.