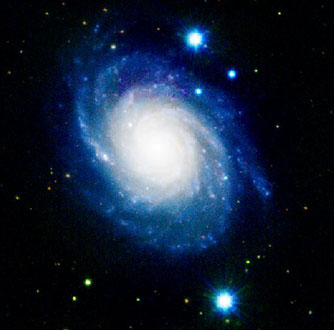 Calling citizen scientists of Earth! In National Science Week this August, we need you to help classify galaxies far, far away! Take a trip to some of the furthest reaches of our universe and help Australian scientists understand how galaxies grow and evolve. During August, we’re looking for citizen scientists to help astronomers classify thousands of galaxies between 3-4 billion light years away.

Because the light from these far-off galaxies has taken a very long time to reach Earth, you’ll be seeing galaxies when they were young. By comparing these young galaxies to older ones, astronomers from the International Centre for Radio Astronomy Research (ICRAR), Western Australia, hope to work out how galaxies change over time, and what causes them to grow.

Galaxy Explorer is similar to the Galaxy Zoo project run by Zooniverse. However, while Zooniverse uses images of galaxies within 1-2 billion light years of Earth, the Galactic Explorer is looking at galaxies 3-4 billion light years away. The project is undertaken with the International Centre for Radio Astronomy Research, WA. There are over 300,000 images of galaxies and each image needs to be looked at by five people to ensure accuracy. The images were taken by Australian telescopes, and are of galaxies further away than the galaxies in Galaxy Zoo.

Why do the scientists want to classify the galaxies?
It’s a bit like a census for the Universe, looking at the galaxy population, but it also provides important information on how galaxies have grown over time, and what mechanism is behind that growth. Because the light from the far-off galaxies has taken a long, long time to reach Earth we’re effectively seeing what the galaxies looked like a long, long time ago – a snapshot of very young galaxies. By comparing them to galaxies that are older, the astronomers can work out:

How galaxies evolve over time
The current theory is that they have grown a lot, starting out as a ball/football shape they then grow a bulge, and eventually evolve a disc. Thus we expect that there will be more galaxies that are football shaped in the far-out galaxies.

How do galaxies grow?
Do they just sit there and guzzle gas and grow? Or do they collide and bash into each other and grow that way? The work citizen scientists do with the images as part of this project will help astronomers work this out.

Why use people rather than a computer?
The human eye is still the best tool for classifying galaxies. Having said that, each image will need to be looked at by 5 people for the most reliable results.

What you’ll do as a citizen scientists

There are two projects on offer as part of Galaxy Explorer.

About the author
Kylie Andrews works with ABC Science and runs National Science Week’s Citizen Science projects. Anyone can help with Galaxy Explorer and you can do it ALL from the comfort of your lounge room. All you need is a computer or tablet and a connection to the internet.
Learn More about Galaxy Explorer