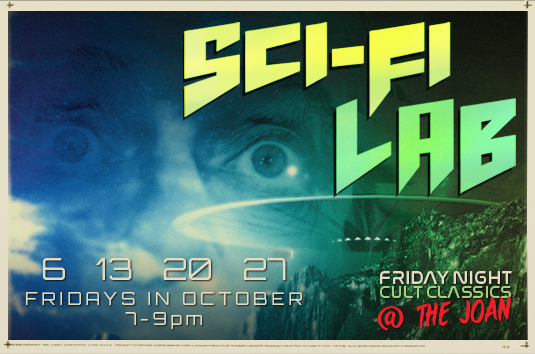 Cult classic movie nights mixed with art and science exploring earth, space and the beyond! Be entertained and indulge your love for the out of the ordinary this October.  Supported by Inspiring Australia (NSW), Sci-Fi LAB @ The Joan presents four compelling Friday nights of sci-fi cult classic film screenings followed by cutting-edge research, guest talks, performances and installations to keep the tradition of sci-fi alive.

Be part of the speculative fiction as you join  guest scientists and artists to explore the themes and “what ifs” of sci-fi. Grasp the relevant futuristic, scientific or technological impacts as well as the societal, historic, economic implications for the human race as Sci-Fi LAB @ The Joan explores all the dreams, fears and anxieties that come with sci-fi:

Whether you’re a hard core sci-fi geek; a newbie beginning to explore this galaxy of wonder, or have no idea at all, bring a gang of friends each Friday in October from 7- 9pm to Sci-Fi LAB @ The Joan and do as Dr Who said: “hold tight and pretend it’s a plan!”

Movie: The Day The Earth Stood Still (1951)
Talk: Is there anybody out there? The Search for Extraterrestrial Intelligence by Dr Ain de Horta (Western Sydney University, Penrith Observatory)
Sound and Dance Performance: Nicola Morton and Eugene Choi