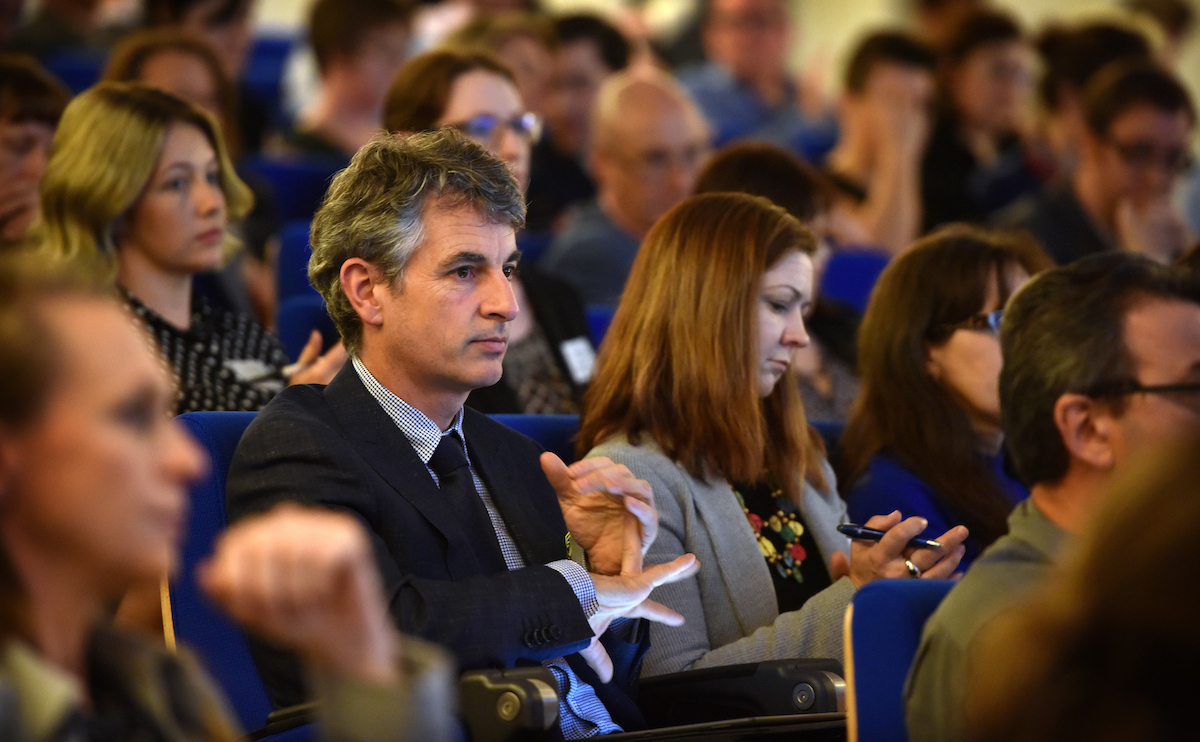 The third Science meets Business event presented by Science Technology Australia at UTS Business School on 9 November 2017 brought together dozens of scientists, politicians and business leaders to consider future opportunities for collaboration. Among speakers were startup founders, government program facilitators, researchers from across the STEM disciplines, politicians and chiefs of industry.

Science Technology Australia is upbeat about the future. The peak body in science and technology representing 70,000 Australian scientists and technologists working across all scientific disciplines estimates that advances in scientific research over the past 30 years and their resulting flow-on affects are responsible for around 26% of Australia’s economy. With science contributing around $330 billion a year, there’s huge potential for research knowledge to continue to contribute to increased productivity in the years to come.

In her opening address, Dr Catherine Livingstone AO, Chancellor of UTS and Chair of the Commonwealth Bank, set the tone of the day. Dr Livingstone encouraged the business and research sectors to remain positive about Australia’s contributions to both the domestic and the world’s innovation system.

Assistant Minister for Industry, Innovation and Science, the Hon Craig Laundy MP, urged the research community to reflect on where it has helped business grow. Minister Laundy decried the notion of innovation being a “dirty word” and implored researchers to consider how their knowledge could be used to accelerate growth.

Shadow Minister for Industry, Innovation, Science and Research, Senator Kim Carr, gave a rousing speech about the demise of Australians’ faith in government and the critical role of science, technology and manufacturing in “repairing democracy”.

A highlight of the day was a fantastic speed meet pitching session run by Sally-Ann Williams from Google and Alice Brennan from SettleIn that had participants honing elevator pitches over several rounds.

What was interesting was the process by which scientists and business representatives crafted concise and compelling descriptors for complex projects. While they were not always immediately memorable, each participant was able to buff up their pitch as they moved from person to person.

Every time a pitch was shared, it was delivered with more confidence. It did not take long for clunky pitches to acquire more polish and much fun was had by participants from all kinds of backgrounds as they moved around the room.

A couple of reserachers and business owners agreed to publicly shared their pitches. Three STEM advocates (who had themselves pitched to be selected for this segment) were later invited to share their pitches to the whole conference delegation at a Soapbox over lunch.

The cofounder of SheFlies, Dr Catherine Ball, discussed this program designed to boost gender equality in science, technology, engineering and maths careers using the world of drones. Dr Ball stole the show with an entertaining and informative session about drones – including the ethics of what’s developed for what kinds of purposes.

A passionate technology ethics advocate, Dr Ball asked why sophisticated drones that can be used to deliver parcels are not also used to rescue residents trapped in a tower block on fire in London. Why are drones primarily used in warfare and commerce – for example to boost productivity in agriculture or to deliver shopping – rather than being applied to safely distribute food to the world’s poorest people?

AusIndustry Innovation Facilitator Gary Colcquoun discussed how he connects industry partners with universities to access research knowledge that can help scale up their businesses. Austrade’s CEO Dr Stephanie Fahey urged researchers to think globally when considering how to commercialise research knowledge, and to be aware of international trends.

Science meets Business concluded with a lively networking event at which connections were made, cards were swapped and conversations continued. Congratulations to all at Science Technology Australia for another successful Science Meets Business forum that showcased the significant contributions that science, technology, engineering and maths make to the Australian economy.

Find out more about the work of Science Technology Australia