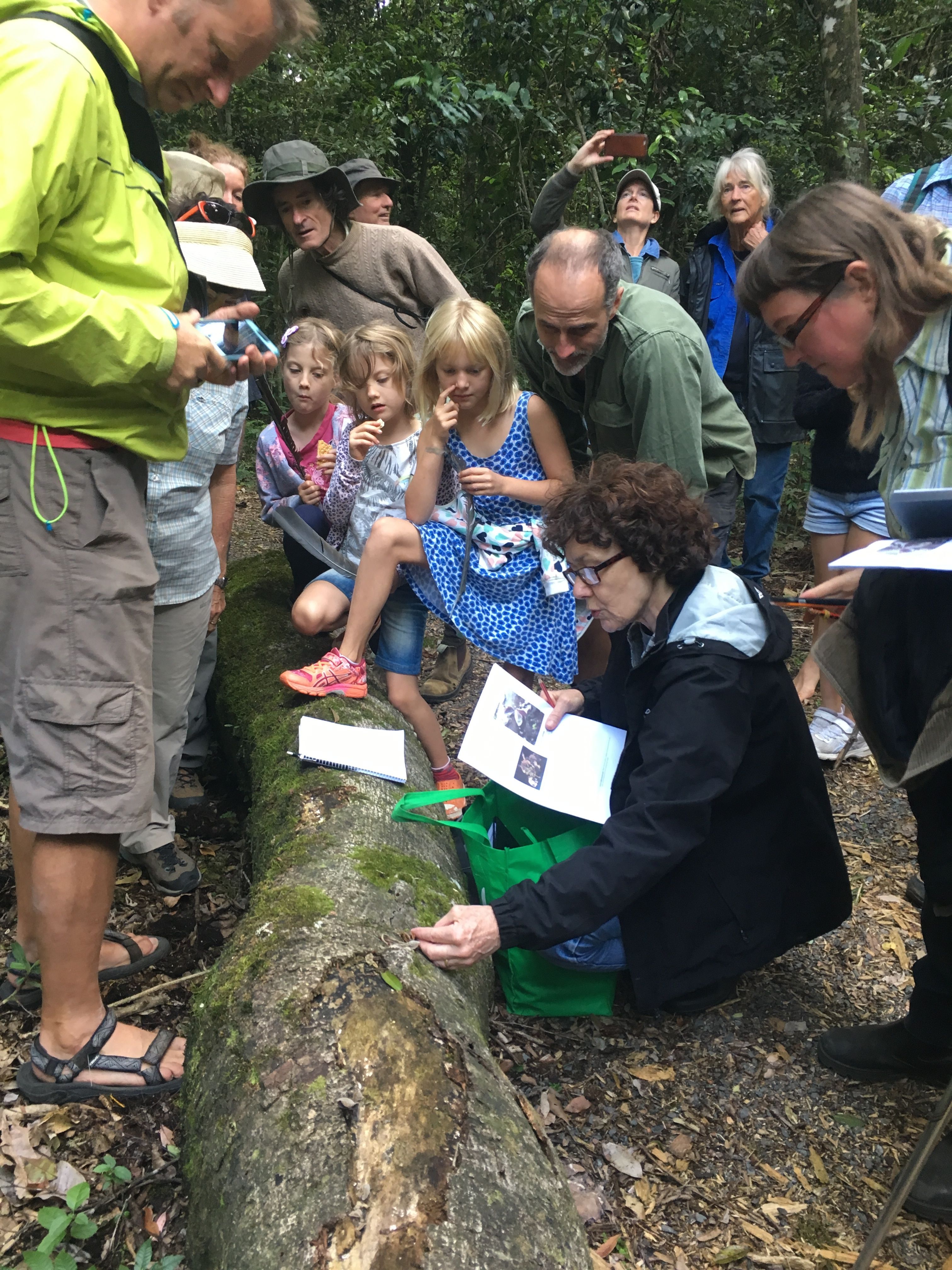 Over the weekend of 14 April 2018, around 50 people took the opportunity to get to know the Upper Allyn Valley a little better. Some took part in surveying areas for the presence of Koalas while others sharpened their eyes to spot an amazing variety of weird and wonderful fungi.

The weekend was a collaboration between the National Parks Asociation and the Paterson Allyn Williams Science Hub. Each group was led by professional scientists and researchers who provided guidance and did their best to answer the myriad of questions thrown at them.

I went along to the fungi foray led by Jamie and Danja Derkenne. Pam O’Sullivan and Skye Moore, the co-authors of A guide to the common fungi of coastal New South Wales, were also there to guide us through the mysteries of these most amazing lifeforms.

For the most part, what we see of fungi is the fruit-body of a much larger, thread like organism that is neither plant nor animal yet accounts for an estimated 25% of the world’s biomass.

Dr Derkenne explained that fungi are integral to the well being of a subtropical rainforest such as that along the Upper Allyn River.

The threads of the fungi enclose tree and plant roots, and enable plants to chemically communicate with each other, often in a very sophisticated way. The health and diversity of fungi generally reflect the health of the entire forest. While plants capture sunlight to drive chemical reactions producing food for animals the fungi are at the other end recycling everything.

As we walked along the forest track, it was clear that different fungi occured in ‘patchy’ groups. Different species are specialised to break down either soft fleshy leaves or tougher woody branches and they also use chemical warfare to mark out their territory and stop other fungus invaders.

And if you think sex is complicated spare a thought for the poor fungi that has not two sexes but thousands!

As a cattle producer, I know that soil carbon is important, as well as soil structure and of course healthy plants for the cattle to eat.

It turns out that most terrestrial plants have a symbiotic relationship with one or more species of fungus that provides food for the plant in exchange for sugar. Fungi are also responsible for sequestering carbon and creating good soil structure.

But it doesn’t stop there – without fungi we wouldn’t have penicillin… or beer!

Dr Derkenne, who spends his time between the Lister Village and Sydney, said in the 50 years that he has bushwalked in the area, there have been immense changes.

“Pademelon, quoll, echidna, platypus and many other animals used to be abundant in this area. Nowadays, you are lucky to see them,” he said.

He explained that since almost the entire river bank has been used as camping sites in peak holiday seasons, many rare and unusual fungi had all but disappeared.

“I acknowledge that the Forestry Corporation have tried to improve the conditions and the policing of campers along the river bank, but Forestry is not keeping up with the pressure.”

“This area urgently needs to be declared national park, and I hope Dungog Shire Council and local landholders will support the National Parks Association proposal to make that happen.”