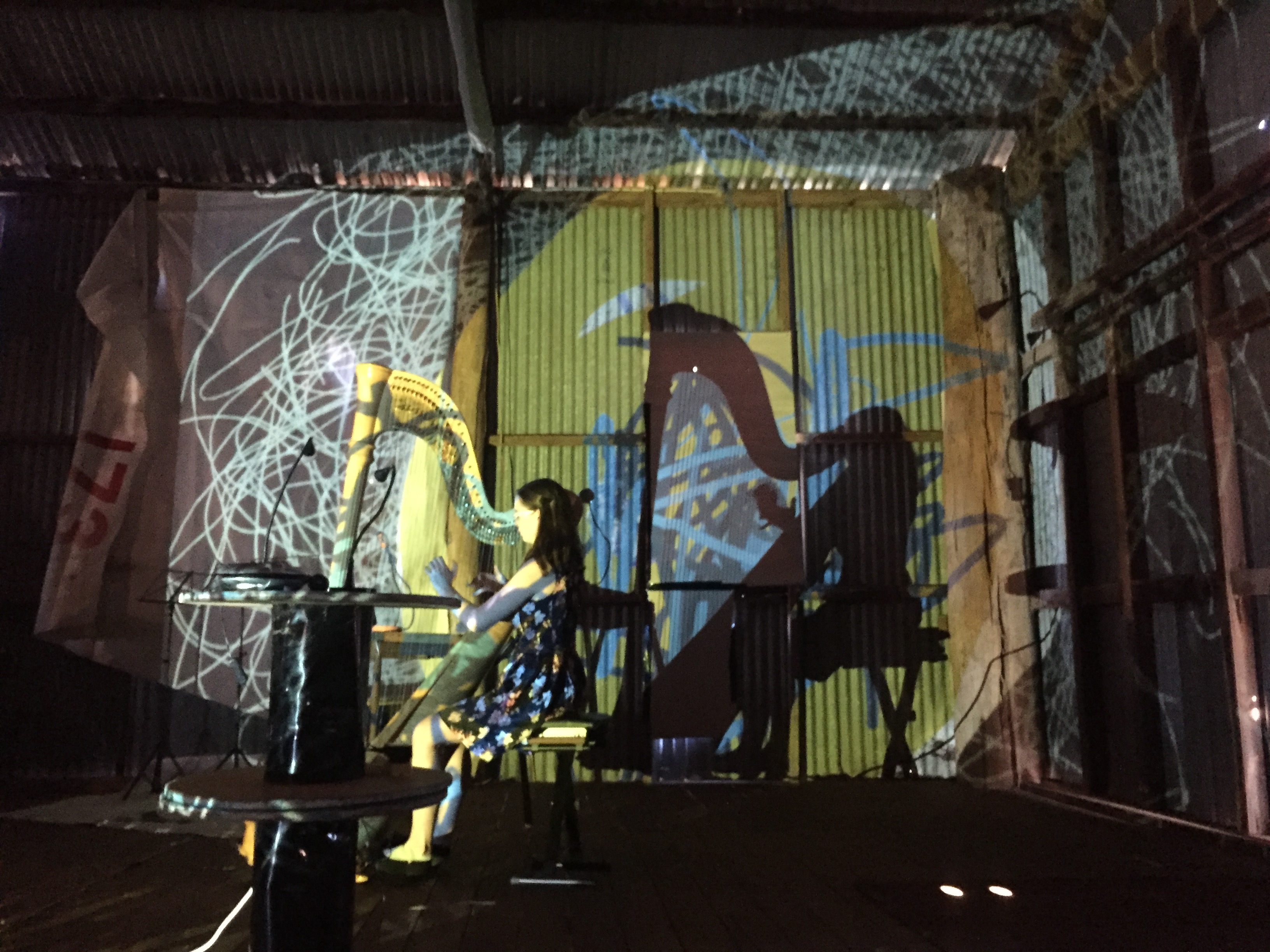 Cowra, Orange and Cabonne locals were treated to a world-class performance on Saturday 5 May 2018 in a historic 100 year-old Riverslea woolshed known as the CORRIDOR Project in the Central West of NSW. As part of a Grand Western Tour to the region, students from the University of Sydney’s Conservatorium of Music put on a spectacular show that was interpreted by liveworks created by artists in situ.

A unique experience for regional audiences, the program was a collaboration between National Art School alumni Todd Fuller, a drawing performer, and Bill Moseley, a tintype photographer, leading pianist David Miller AM and musicians from the Conservatorium.

The musicians composed a series of improvisations based on the elements – earth, wind, fire, and water- with a classical repertoire that comprised Flute, Oboe, Clarinet, Bassoon, Harp and Piano. Drawing performance artist Todd Fuller responded to the music through dynamic light projections in-situ. Fuller’s stunning performance drawings and paintings were digitally mastered through specific coding and specialised equipment.

Todd Fuller said the CORRIDOR Project created something really special over the weekend.

“It was an amazing opportunity as an artist to collaborate with five talented young musicians. Having them improvise a spontaneous program with a visual artist was something they had not done before,” he said.

“As we built the performance, I was inspired to watch them jump, leap, thrive and flourish on the stage. It was a complete privilege to collaborate with them based the elements and periodic table,” he added.

Harpist Jo Baee’s interpretation of water, alongside Fuller’s extraordinary projection of light streams that danced across the walls of the woolshed reminiscent of a waterfall, was a mesmerising mix.

Never having worked with a visual artist before, Baee said the collaboration added an extra dimension to her music, especially when performed in a woolshed.

“Playing music in a woolshed is a very different experience to performing in the traditional locations we musicians are familiar with,” she said.

Artist Bill Moseley created a pop up dark room and studio within a sheep pen demonstrating the antiquarian process of tintype photography, creating photographs of the musicians and audience members to stunning effect.

Moseley’s use of chemicals including collodion and silver nitrate captivated photography enthusiasts an improved their understanding of early photographic processes.

One of Australia’s leading pianists, David Miller AM, representing the Sydney Conservatorium of Music, said the project was a tremendous success.

“While the Conservatorium students didn’t know what to expect, they jumped into the elements concept straight away.”

Miller said the unique woolshed performance provided the young musicians with an innovative opportunity to enhance their performance and communication skills with improvisation.

“The woolshed is a wonderful location in which to perform,” he added, commenting that the acoustics and musicians’ proximity to the audience was a highlight for the performers.

This unique STEAM collaboration is a first, thanks to the Orange Cowra Cabonne Science Hub, the Sydney Conservatorium of Music and local councils with the support of Inspiring Australia (NSW).