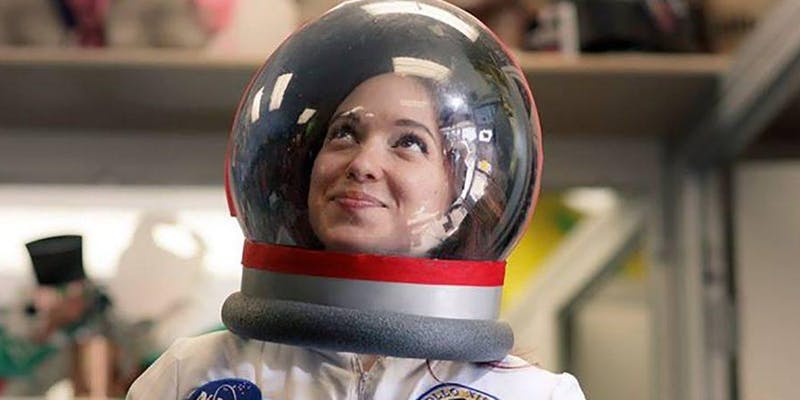 Community members in Western Sydney will have a rare chance to see one of the world’s top science communicators in person, when North American writer and space historian Amy Shira Teitel comes to Penrith Observatory on 17 July 2018.

“I’ll be talking about the women who took the astronaut qualifications in the 1960s but never flew,” Teitel says, “because it was America in the 1960s.”

A lifelong space history nerd, Amy Shira Teitel took her childhood fascination with the Apollo missions and turned it into a career as a spaceflight historian.

Author of the book Breaking the Chains of Gravity, Amy has a cool 250,000 Twitter followers. She also hosts the popular YouTube channel, Vintage Space.

Her recent video about the forgotten female cosmonaut class in the Soviet Union racked up over 23,000 views in just five days.

“Rather than retelling the glossy stories of astronauts, Vintage Space peels back the veneer to look at the real stories – the innovations that failed, the unrealised technologies and the human elements that are less publicity friendly so often remain buried.”

Amy’s talk is being organised by Science at the Local, a community science initiative supported by Inspiring Australia featuring bimonthly pub talks in the Lower Mountains, a podcast and joint events with groups like Bushcare and the Conservation Society.

“This is a fantastic opportunity for science, space and history lovers of all ages to learn about the history of spaceflight and meet a terrific communicator on a rare visit to Australia,” Science at the Local’s Hamish Clarke says. “Having it at a wonderful venue like the Observatory is the icing on the cake.”

“After Amy’s talk we’ll be heading outside for a viewing session. Fingers crossed the clouds keep away!”

This event is sponsored by Regional Development Australia – Sydney, who are part of the push to support women in STEM (Science, Technology, Engineering and Maths). Science at the Local is supported by Winmalee and Springwood Neighbourhood Centres, Inspiring Australia and the NSW Government.

To get involved with Science at the Local, go to www.facebook.com/ScienceAtTheLocal.
You can also contact Hamish Clarke, 0458 105 269.