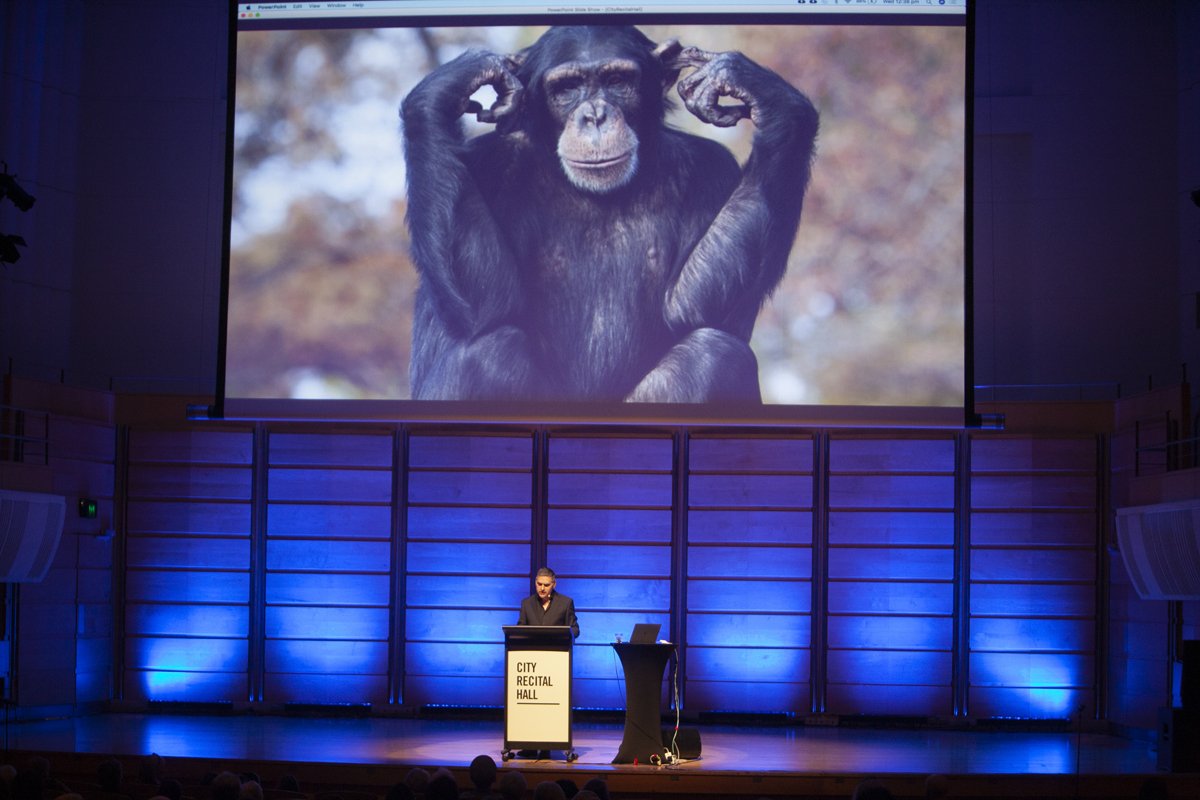 During our evolutionary history, what biological elements played a key role in giving us the ability to be musical? UNSW Associate Professor Darren Curnoe asked this question  at the final in the This Sounds like Science series of science and music talks held at City Recital Hall in Sydney in October.

“One aspect of humankind which is unique and universal to all human culture is the arts, especially music and dance,” said Associate Professor Curnoe. “The fact that music is universal and seems to be part of every culture going back thousands of years means it has a strong biological basis to it. We might even say that our capacity for music is genetically encoded or hardwired into the brain.”

But Associate Professor Curnoe said it would be an oversimplification to limit the answer to how humans developed musicality over time to an evolutionary or biology reasoning.

Associate Professor Curnoe’s comment about the mystery of musicality echoed those by Charles Darwin, the father of evolutionary biology. Darwin mused over how the human quality of musicality couldn’t be explained by the evolutionary struggle for survival.

“As neither the enjoyment nor the capacity of producing musical notes are faculties of the least use to man in reference to his daily habits of life, they must be ranked amongst the most mysterious with which he is endowed,” Darwin wrote in The Descent of Man in 1871, which Associate Professor Curnoe quoted.

Associate Professor Curnoe took the audience on an auditory exploration on possible influences on the evolution of human musicality and creativity. He shared clips of musical behaviour, from the rhythmic slaps of the chimpanzee against the tree trunk to the lyrical warble of the magpies and use by male palm cockatoos of twigs to beat a tempo against a branch to attract a mate.

Animal music is performed as instinctive behaviour, and while we appreciate the qualities of their music, do animals share the same feelings?

Associate Professor Curnoe said the scale of appreciation of music by the modern human and even the construction of a profession specialising in the production of music required a level of mental and physical processing unique to our species.

Clues to musicality appeared late in our evolutionary history, he said. How we hear, make and receive music compared to Neanderthals and primates was largely due to anatomical differences.

‘In so many ways music is at the core of the mystery of what it means to be human.’

Human ear ossicles were distinctive in shape compared to our extinct evolutionary relatives. The ossicles were the smallest bones in the human body and transmitted sounds vibrations in the air in other parts of the ear to be interpreted by the brain.

Another difference was the modern human’s pharynx, which was much longer than chimpanzees. The pharynx was part the system that allowed us to produce complex sounds at the heart of human speech.

Even our hormones played a part. The link between pleasure and music was due to chemical rewards in form of the hormone dopamine associated with reward motivated behaviour.

“Research suggests that the emotional pleasures that we feel from music is due in large part from squirts of dopamine in the blood, creating this rewards system as we listen to it being performed,” Associate Professor Curnoe said. “This suggests there might be a survival value for us as a species or that we’ve managed to hijack the system in our evolution to get immense emotional or neurochemical pleasure from music.”

Archaeological records offered more tantalising glimpses of the evolutionary origins of musicality. The discovery of a flute carved out of vulture bone in the Hohle Fels cave in Germany was the earliest example of a musical instrument, dating to about 40,000 years ago.

The Hohle Fels are one of the most archaeological sites in the world, with some of the earliest examples of prehistoric art and musical instruments found in the cave. Associate Professor Curnoe shared with the audience a haunting recording of the replica of the flute being played in the cave.

However, Associate Professor Curnoe said 40,000 years was too recent for the invention of music, because by then humans had already migrated from Africa to settle in Asia and Australia, bringing their musical instruments with them.

The exact origin of musicality was still largely a mystery, but what remained indisputable was that the modern human’s ability to appreciate music was core to our humanity.

“In so many ways music is at the core of the mystery of what it means to be human,” Associate Professor Curnoe said.“There is still so much to learn to how and why we make it, and the role it has and continue to play in our lives, stretching back 100,000 years. Like Darwin said, our capacity for music continues to be one of the greatest mysteries of human evolution. It is a phenomenon that has a lot to tell us about both our evolution and the important role our culture has played in fine-tuning it.”

Guest post by Ivy Shih courtesy of UNSW Sydney. Image courtesy of David Vagg. This Sounds Like Science is a series of free talks presented by Inspiring Australia. Details of the 2019 series will soon by announced on the City Recital Hall website.