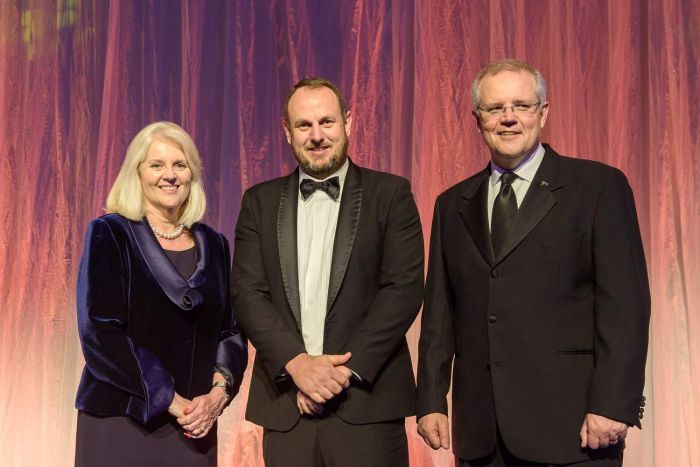 Both Scott and Peter are active members of Inspiring Australia’s Hunter Innovation and Science Hub that provides welcoming opportunities for community members to learn about science and technology and the exciting potential of STEM careers through entertaining and memorable community events.

Prime Minister’s Prize for Excellence in Teaching in Secondary Schools

Congratulations Dr Scott Sleap for being awarded the $50,000 Prime Minister’s Prize for Excellence in Teaching in Secondary Schools!

Scott is Deputy Principal, STEM, for the Cessnock Learning Community. Cessnock in New South Wales was traditionally a mining town, but today’s high-value jobs in the Hunter Valley are in agriculture, tourism and increasingly in aerospace. Williamtown is already a maintenance base for Australia’s F/A-18 fighters. Soon it will be a maintenance hub for the Joint Strike Fighter in the Asia-Pacific.

Many of Cessnock’s students don’t believe that the new jobs are for them. Scott is opening their eyes and showing them that they can participate in the new economy. He’s done that by creating the Cessnock Academy of STEM Excellence, a partnership between Cessnock High School, its feeder primary schools, and local industry.

Students struggling with numeracy are catching up with the help of robotics. A team of Aboriginal girls are making and racing model F1 cars, mentored by Boeing engineers. And the number of students signing up for STEM subjects is growing. NSW Education is now rolling out similar programs in other regional centres.

At school, Scott was told that a career in science or engineering wasn’t for him. He studied education instead, but after working as a teacher for a decade and a half he was drawn back to STEM. So in 2013, while teaching Industrial Arts and undertaking a PhD in Engineering, Scott started working with Regional Development Australia – Hunter to build a curriculum model that integrates science, technology, engineering and mathematics and brings in ‘real-world’ industry perspectives. The model, called iSTEM, has been adopted in more than 260 schools across NSW.

Now he’s helping to implement the program, unlocking careers in STEM for thousands of students in the Hunter Valley and across NSW. His work has been influential in turning around the Hunter Valley’s school science performance. Local schools in the program have seen a 19 per cent increase in Year 11 participation in STEM subjects over the course of seven years, while the state average has fallen slightly in the same period.

Launched by Science and Technology Australia (STA), the new STEM Ambassador program will connect experts with members of parliament over the next 12 months to help inform evidence-based policy creation.

Peter will work closely with the Member for Hunter and Shadow Minister for Agriculture, Fisheries and Forestry, Mr Joel Fitzgibbon, to increase STEM knowledge and awareness.

“This opportunity will provide politicians with increased insight into the types of STEM research being conducted in their electorates and beyond, equipping them with a better understanding of how science can contribute to decision-making and policy,” he said.

Find out more about the STEM Ambassador Program managed by Science Technology Australia.