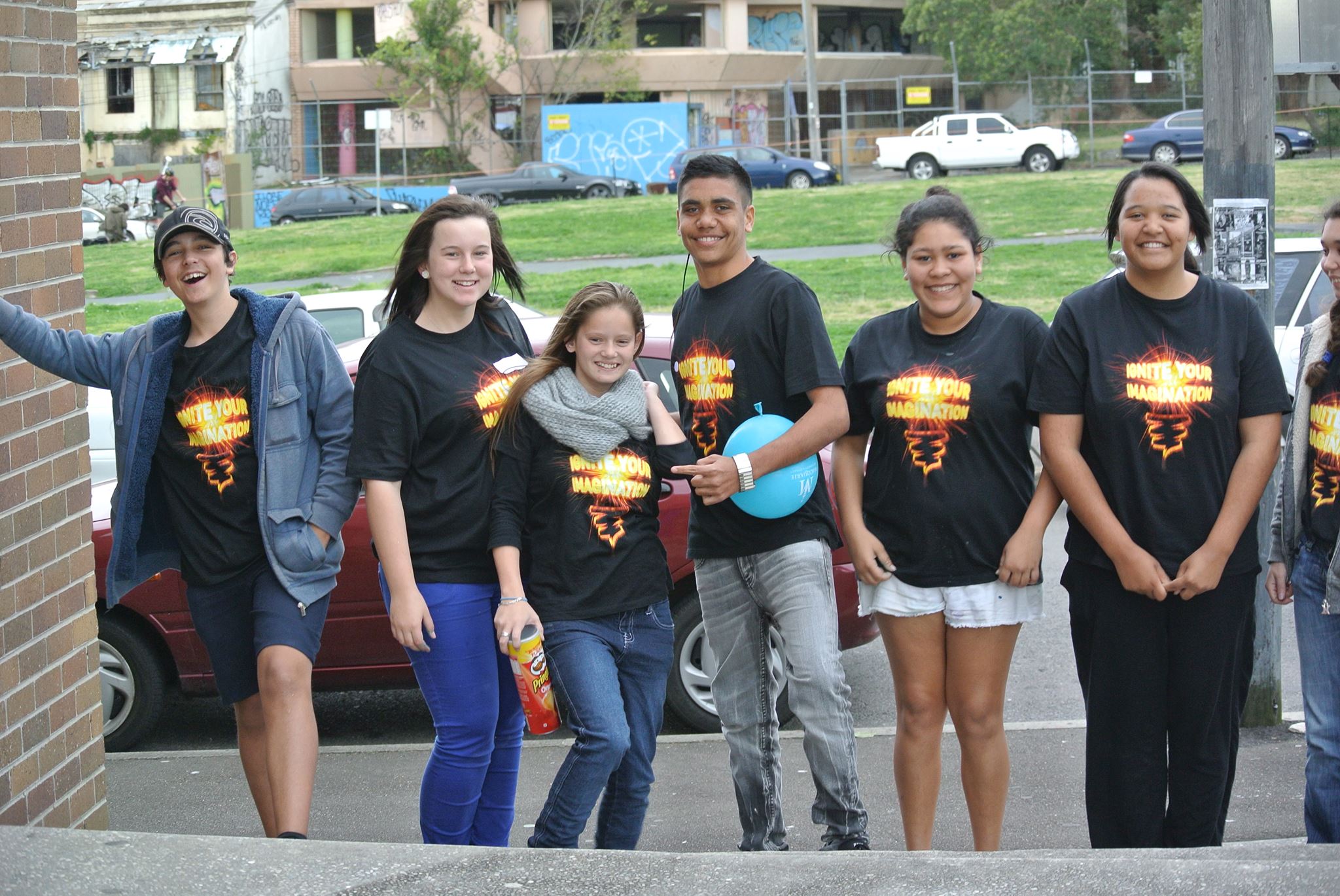 Congratulations to colleagues across NSW who have won Inspiring Australia funding from both the national grants program and the NSW Regional Science Grants program to support the delivery of dozens of National Science Week community events between the 10-18 August 2019.

The Indigenous Science Experience @ Redfern
Macquarie University
What can Aboriginal astronomy tell us about the night sky? How is our native flora used in bush medicine and soap making? How do Indigenous Australians make axes from stone and other artefacts? What can we learn about sustainable living from 60 000+ years of Indigenous culture? The Indigenous Science Experience @ Redfern returns to present a wonderful celebration of Indigenous and Western science, and Indigenous youth and Elder achievements. Part of the Sydney Science Festival and National Science Week, the four-day event held each year at the Redfern Community Centre will demonstrate the value of traditional and contemporary Indigenous knowledge in science and technology, and the relevance of science to our everyday lives. Indigenous students from National Indigenous Science Education Program partner schools will assist in demonstrating activities.

Science in the Wild – Dinosaurs vs Superpowers
Royal Botanic Gardens and Domain TrustBatman, Spiderman, Wonder Woman, and Cat Woman have their own sets of superpowers. How do they compare with those of nature’s superheroes in our own backyards? Super sight, super hearing, super strength and camouflage are just some of the superpowers in nature. Presented as part of Sydney Science Festival, Science in the Wild is a free, outdoor family and community event at The Australian Botanic Garden Mount Annan. Join into the activities the scientists have prepped for you and find out about those amazing superpowers.

The Innovation Games
Sydney Olympic Park Authority
Can you kick the physics out of a footy? How fast can you run in a sprint test? How far can you throw a spear? Or a boomerang? How much energy can you generate on a skate ramp?The Innovation Games is a free family fun day full of sporting, science and technology action at the town centre of Sydney Olympic Park. Presented as part of Sydney Science Festival, activities include drone simulators, virtual reality gaming, a scooter and skate challenge, BYO-device augmented reality treasure hunt, Australian wildlife shows, sports and fitness challenges, wellbeing talks, participatory Indigenous art, chemistry shows, films, and social media live streaming throughout the day. The event brings science to sports fans attending the AFL game at Spotless Stadium.

Science in the Swamp – Dinosaurs vs Superpowers
Centennial Park Trust
Carpe diem: seize the day and meet the Fish Whisperer’s carp and turtles, try daytime astronomy, ID a frog, and meet the rock stars of the NSW Geological Society. One of the most popular events in Sydney Science Festival, Science in the Swamp will return to Centennial Parklands for a free, outdoor family and community event celebrating science and providing a range of diverse and exciting hands-on science activities accessible for all ages.

Sea Skills: Ocean navigation, safety & survival
Australian National Maritime Museum
What can Indigenous science and navigation and Western wayfinding teach us about survival at sea? This National Science Week program coincides with and complements the Australian National Maritime Museum’s winter exhibitions Elysium Arctic and Bligh: Hero or Villain? with a series of events on maritime science, skills and safety in ocean exploration.The Sea Museum will partner with Tribal Warrior to deliver the science of Traditional and Western navigation through interpretive on-water events, maritime skills and safety learning programs. Explorer Justin Jones will present a public lecture and workshop on the science and survival skills needed in his epic crossing of the Tasman in a kayak. Other activities will focus on the science in sea skills, astronomy, marine technology, mathematics and safety.

Northern Sydney Science Hub
Celebrate science in the North side
A series of art/science events and competitions will be promoted and presented in libraries and community centres, culminating in a free family festival with demos and shows at the CSIRO’s stunning Linfield facility. There will also be presentations at three large libraries in Gordon, Chatswood and Ryde.

Royal Botanic Garden Sydney
Living Laboratory
Living Laboratory is a day for the community to celebrate science at the Royal Botanic Garden Sydney through hands on activities delivered by ten presenters. All welcome to participate in this free day of hands on activities, demonstrations, shows and talks in the beautiful Gardens. Find out why plants are truly the vital science. A mini version of this event will also be presented at the Blue Mountains Botanic Garden in Mount Tomah.

Riverina Science Festival
Riverina Science Hub
Chemistry in the kitchen, Indigenous science, gaming technologies, and FUTURE WORLD are just some of the activities planned across Wagga Wagga for the Riverina Science Festival. This week-long festival includes many interactive science-based programs spread across a number of venues for all age groups. The highlight in 2019 will be FUTURE WORLD where creative industries intersect with science: the science of gaming, data visualisation for agriculture, technology and entrepreneurship, virtual reality; and the role of science edutainment. The National Indigenous Science Education Program community day embraces both modern chemistry and ancient Indigenous science of stone tools and weaving. Kitchen Science, Storytime and an Environmental Walk will complete a week of activities.

Patterson Allyn Williams Science Hub
Patterson Allyn Williams Festival of Science Stuff
A day of science in a paddock with farm robotics, ecological walks and talks, and a look at local farm inventions. Drone challenges, planting with drones, a look at future farming, and a science film night at the historic James Theatre. Guerrilla science in the street, and the science of fermentation and a science trivia night at the Tinshed Brewery. These are all part of the Paterson Allyn Williams Festival of Science Stuff—a lively, four-day array of demonstrations, lectures, discussions, happenings and shows across multiple venues that will bring science to life that’s relevant to both locals and visitors.

Hunter Innovation and Science Hub
Hunter Science Festival
Eight different events will be presented across a range of Hunter locations including in a winery, at the Botanic Gardens and as part of full day of exciting activities at the Newcastle Museum. Up to 4,500 community members are expected to participate in this year’s Hunter Science Festival, a week long celebration for the whole community.

Murray Science Hub
Pygmy Perch 360 Film Tour
Pygmy Perch 360 is an immersive, 5-minute, short film experience that was developed by the Murray Science Hub in 2018 to highlight the plight of the threatened local Pygmy Perch. Screened entirely in the round, using a KMART trampoline frame and rear projection technology, audiences are able to enter the world of Pygmy Perch and truly learn about the species struggle. This year the beautiful 360 film will visit the NSW towns of Holbrook, Tumbarumba and Corowra with free events and talks presented by scientists and artists about habitat loss.

Illawarra Science Hub
The 2019 Illawarra Flame Festival
The third Illawarra Flame Festival will be held in Science Space with guided walks through Puckey’s Estate and Bark Bingo tours of local vegetation. Other activities will include a presentation by the local RFS using modern technology and planning including drones to assist with firefighting, a presentation by the physics department at UOW, Science of Fire shows from Science Space interns, live animal displays , flame tree propagation workshops by the Wollongong Botanic Garden, a presentation on how fire affects local vegetation, a theatrical performance and characters interacting with the audience and looking at how fire affects native fauna and lots more. The festival is expected to attract at least 400 people.

Southern Tablelands Science Hub
Habitat Corridors
Habitat Corridors will present three workshops in July and August, and a public forum and exhibition to be held in Science Week. The workshops will be an immersive science and creative interactive workshop process looking at the local endangered species held in conjunction with NSW OEH, Landcare and the K2W Link. The project is expected to reach at least 300 people.

Sapphire Coast Regional Science Hub
Bega Valley Science Festival
A series of activities will be on offer in the region including pub nights and citizen science activities. A highlight will be a BioBLitz at the Bega River (including for schools). Several public events will also be run by local Science Hub members for the whole community to celebrate science on the Sapphire Coast.

Orange Cowra Cabonne Science Hub
National Science Week celebrations
Among events will be the Curation of a Herbarium at Canowindra CWA, a fascinating presentation on biosecurity and specimen management by the lead curator of the NSW DPI Herbarium; Botanica Galari (Lachlan) a Wyangala/Lachlan River illustration and flower pressing workshop by artists and botanical illustrator; Ecologies in the Landscape, workshops led by artists and OEH scientists; Abstracted Ecologies in Clay, Encaustic Painting and a field-trip at the CORRIDOR project. Also on the program will be Planet Organic: Astronomy and DJ beats, an entertaining night of music and stargazing at Darbys Falls Observatory near Wyangala and three presentations of the SCINEMA film festival in Orange, Canowindra and Cowra.

Image courtsey of the National Indigenous Education Program. Inspiring Australia’s flagship campaign, National Science Week is Australia’s longest running festival and presents more than 2000 entertaining events across the country in schools and in the community to celebrate research excellence and science achievement. The NSW Science Grants Program is managed by Inspiring Australia NSW and supports both Year-Round and National Science Week events.