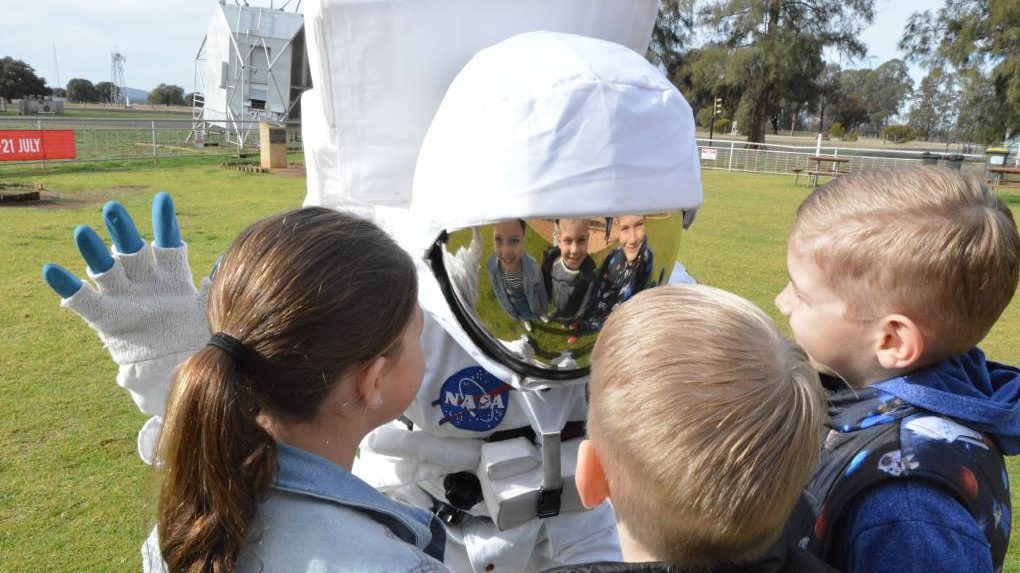 Do you swoon over the Moon? Meet an astronaut and an astrophysicist, stargaze the day away, discover a world-class telescope and watch The Dish movie beside The Dish on July 20 and 21 at CSIRO Parkes Open Days. Celebrate the first Moon landing 50 years ago by touring the iconic Parkes telescope and learning about Australia’s crucial role in the Appollo 11 landing.

Discover how Australia received and relayed images to the world, tracked spacecraft and monitored the astronauts’ health. Find out how the initial TV pictures from the Moon and Neil Armstrong’s first steps on the lunar surface were shared via NASA’s Honeysuckle Creek tracking station near Canberra: after a few minutes, the higher quality television signal received by the Parkes telescope was relayed around the world.

Think of Apollo 11 and that famous first footstep onto the Moon comes to mind.

It was 12.56pm on 21 July 1969 (AEST) when mankind took its ‘one giant leap’ onto the Moon’s surface and the incredible images were broadcast to 600 million people around the world watching in collective awe from their classrooms, offices and department stores.

Getting those images to Earth took some doing, and Australia played an important part.

In 1969, Australia had more NASA tracking stations than any country except the USA. These included a 26-metre antenna at Honeysuckle Creek near Canberra that was purpose-built for the Apollo program.

Opened in 1961, CSIRO’s 64-metre Parkes telescope was intended for radio astronomy, but CSIRO agreed to help NASA track spacecraft when an extra dish would give much-needed sensitivity.

Those initial TV pictures from the Moon and Neil Armstrong’s first steps on the lunar surface were received through the Honeysuckle Creek station. After a few minutes, the higher quality television signal received by the Parkes telescope was relayed around the world.

The Apollo 11 Moon landing inspired humanity to dream and to rethink what we can achieve.

While it was NASA’s moment, it was Australia’s too: sending astronauts to the Moon and sharing the momentous occasion couldn’t have happened without the pivotal role Australia played.

The missions of today and tomorrow will inspire future generations to push space exploration beyond what is imaginable now.

To mark the 50th anniversary of the Moon landing, CSIRO will be celebrating with open days at its Parkes radio telescope on Saturday 20 and Sunday 21 July.

When: 20-21 July from 9 am
Where: Parkes Observatory Visitors Centre, 585 Telescope Road, Parkes NSW 2870, Australia
Cost: free, no need to register.

You’ll have the rare opportunity to enjoy a tour inside the telescope along with plenty of fun-filled activities including the chance to drive the telescope to detect pulsars in real time and hear from experts in astronomy and space science.

There will be a special treat on the Saturday evening, with an outdoor screening of the movie The Dish, to be introduced by one of the movie’s stars – Roy Billing – who played the Mayor of Parkes in the movie.

And on Sunday, you’ll hear from special guests the Australian Space Agency and Adelaide-born NASA astronaut Dr Andrew Thomas, who will be in attendance thanks to support from the U.S. Embassy in Canberra. And watch the original broadcast of the moonwalk as it happened from 12.56pm.

CSIRO has also partnered with ABC Radio for a live broadcast during both days of the event, and Parkes Shire Council to ensure everyone visiting the open days has a fantastic visit to the region.

Find out more about Australia’s role in supporting Apollo 11, our growing place in space, and the Parkes Observatory open days, at www.csiro.au/apollo11. Follow the Facebook event page here