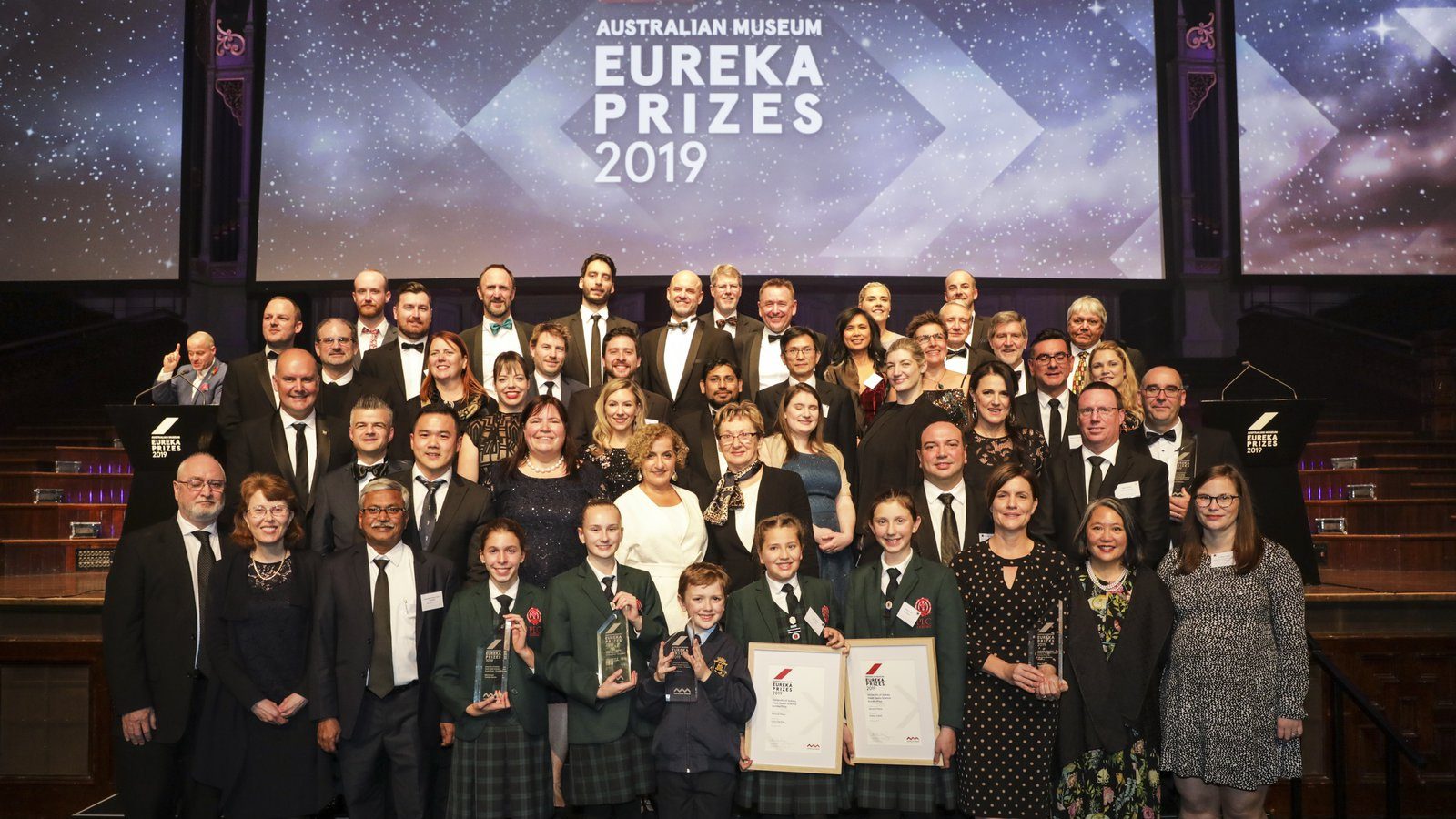 The winners of the 2019 Australian Eureka Prizes were announced in Sydney on 28 August, with the National Indigenous Science Education Program led by Yaegl Country Aboriginal Elders with Macquarie University and Charles Sturt University and taking out the new Eureka Prize for STEM Inclusion. The FrogID Team from the Australian Museum also won the Prize for Science engagement.

Participation in NISEP elevates students into leadership roles, and has resulted in increased academic achievements in STEM and beyond.

Other prestigious prizes were awarded for the a wide range of scientific discoveries from cells which could lead to cancer immunity, wireless technology developments and ceramics for large bone repairs to the potential to restore movement after paralysis via blood vessels and wetlands’ ability to store carbon as sea levels rise. School students were also awarded for their science story telling skills.

Australian Museum Director and CEO, Kim McKay AO, congratulated the winners and highlighted the critical role of scientists in all facets of society.

“The work of scientists is what will change Australia’s future. It plays a critical role in so many areas – business, conservation, medicine, engineering, safety, communications and more – it touches every part of our lives.”

“The Australian Museum Eureka Prizes have been acknowledging Australia’s scientific achievers for almost 30 years – people who are often not publicly recognised but whose work has an impact on all of us every day,” Ms McKay said.

NSW Environment, Energy and Science (DPIE) Eureka Prize for Environmental Research
Blue Carbon Horizons Team, University of Wollongong; Macquarie University; and ANSTO
Coastal wetlands are efficient natural systems in the trapping of carbon dioxide. The Blue Carbon Horizons Team has shown that the capacity of coastal wetlands to store carbon will substantially increase with sea level rise, providing a counter to global warming. Working alongside government, the team’s research is being used to protect and restore coastal ecosystems.

UNSW Eureka Prize for Excellence in Interdisciplinary Scientific Research
Endovascular Bionics Laboratory, University of Melbourne and Synchron Inc.
Skilfully bringing together a wide variety of disciplines, Synchron and the Endovascular Bionics Laboratory have developed a technology with the potential to restore mobility to people with paralysis. The team have developed technology which can interpret brain signals and convert them to commands. The innovation enables control of external equipment via a Stentrode, which uses blood vessels as a pathway to the brain avoiding risky open brain surgery. The team describes the breakthrough as similar to “building a bionic spinal cord”.

ANSTO Eureka Prize for Innovative Use of Technology
Professor Hala Zreiqat, University of Sydney
Professor Hala Zreiqat and her team have developed the world’s first synthetic biomaterials capable of healing large bone defects, even in load-bearing positions like the spine or lower limbs. Using mathematical modelling techniques and customised 3D-printing technology, they have also developed the capabilities to print these strong, bioactive and bioresorbable biomaterials in any size or shape. The bioceramic material not only heals the bone, it also disappears when its job is complete.

Macquarie University Eureka Prize for Outstanding Early Career Researcher
Associate Professor Laura Mackay, University of Melbourne
Widely regarded as a leader in the field of immunological memory, Associate Professor Laura Mackay has discovered that a novel population of immune cells, called tissue-resident T cells, are critical for immune protection against infection and cancer. Harnessing these cells will be key for the development of new immunotherapeutic strategies against disease.

Defence, Science and Technology Eureka Prize for Outstanding Science in Safeguarding Australia
Team GreyScan, University of Tasmania and Grey Innovation
Readily available inorganic compounds are increasingly being used in home-made explosive devices. GreyScan is the world’s first trace detection device that can identify inorganic explosives in under a minute. Their use in mass transit locations like airports and train stations could help make Australia and the world safer.

3M Eureka Prize for Emerging Leader in Science
Associate Professor Melody Ding, University of Sydney
Working at the intersection of physical activity, epidemiology and chronic disease prevention, Associate Professor Melody Ding has devoted her career to generating policy-relevant research outcomes. Chronic diseases such as diabetes, heart disease and some cancers are responsible for 75% of deaths globally. As most chronic diseases are preventable, Melody and her team’s work identifying risk factors such as physical inactivity is key to tackling public health challenges. Melody lives what she preaches, even guiding yoga classes for fellow work mates. In addition to skillfully leading multidisciplinary projects and teams, she has mentored early career researchers from culturally and linguistically diverse backgrounds.

CSIRO Eureka Prize for Leadership in Innovation and Science
Professor Branka Vucetic, University of Sydney
Professor Branka Vucetic has made seminal contributions to the fields of coding and wireless communications with much of her work underpinning the wireless technologies we use today. Her development of algorithms for cellular WiFi and satellite communication provide fast connectivity for millions of people. Now she’s leading work which will enable large-scale industrial automation, self-driving cars and robotic surgery.

University of Technology Sydney Eureka Prize for Outstanding Mentor of Young Researchers
Professor Barry Pogson, Australian National University
Professor Barry Pogson’s vision is to create a nexus of researchers, industry leaders and policy makers that collectively shape agriculture for the benefit of global food security. Using a dynamic and sustainable multi-tiered mentoring approach, he has a profound impact on the personal development, career prospects and learning experiences of students at all tertiary levels.

Department of Industry, Innovation and Science Eureka Prize for Innovation in Citizen Science
FrogID Team, Australian Museum
FrogID is a national citizen science project aimed at understanding and conserving one of the most threatened groups of animals on the planet. Using a free smartphone app, participants record and submit information on calling frogs. In less than two years, FrogID has built an unparalleled database of Australian frogs and transformed the scientific community’s understanding of the distributions, breeding seasons and habitats of frogs.

Australian Museum Eureka Prize for Science Journalism
Liam Mannix, The Age
Over the past year Liam Mannix has researched and written a series of hard-hitting articles challenging the science behind nerve-pain drugs, ergonomics and diet pills. His articles have delivered real-world results and demonstrated the important role journalists can play in holding the scientific community to account.

University of Sydney Sleek Geeks Science Eureka Prize – Primary School
Finn Thomas, St Mary’s Catholic Primary School, Concord, NSW
Inspired by the book Jurassic Park, Finn ponders what life would be like today if a dinosaur species were to be resurrected. In his film, Can We Bring Dinosaurs Back to Life? Finn explores the science and biotechnology critical to this notion and explains the challenges scientists would face. Watch the video

University of Sydney Sleek Geeks Science Eureka Prize – Secondary School
Ellie Cole and Tsambika Galanos, Presbyterian Ladies’ College, Sydney, NSW
What do cosmetics, clothing and toothpaste have in common? They all contain microplastics. In Fish Fiasco, Ellie and Tsambika investigate how microplastics might end up in the ocean. They interview scientific experts, visit a wastewater treatment plant and even study fish stomach contents to uncover how society’s use of plastic impacts the environment. Watch the video

In addition to celebrating the winners of the Eureka Prizes, the 2019 Australian Museum Research Institute Medal was awarded to Senior Fellow Mark McGrouther. The AMRI Medal is presented to an individual staff member, senior fellow or team from the Australian Museum Research Institute for outstanding science and communication of their research outcomes.

Mark McGrouther was recognised for his outstanding work managing, developing and improving the AM’s Ichthyology Collection, the largest of its kind in the southern hemisphere, over the last 30 years. In 2016 Mark launched the Australasian Fishes project, enabling citizen scientists to upload, identify, and comment on observations of Australian and New Zealand fishes.