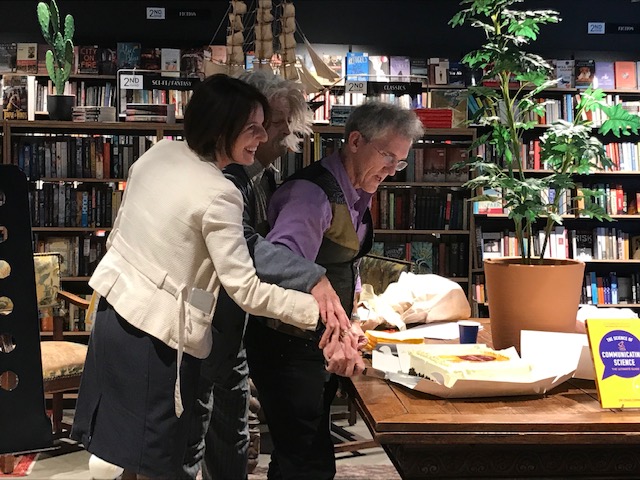 In launching Dr Craig Cormick’s book, The Science of Communicating Science – the Ultimate Guide, the Chief Executive of the Australian Academy of Science, Anna-Maria Arabia, reflected on why today, more than ever, we need as many scientists and science communicators as possible to be communicating with the greatest effect. This is a transcript of her address presented at Harry Hartog in Canberra on Thursday 7 November 2019.

Today, more than ever before, institutions – particularly those built on foundations of evidence, track record, and expertise -are challenged; democracy is challenged; indeed we are all challenged by the so-called post-normal or post-truth world.

A world where experts and the evidence base can be ignored or deprecated or considered irrelevant.

In 2016 the Oxford dictionary named post-truth the international word of the year. The internet has become awash with memes that have been inspired by it, and often, we see both commentators and trolls alike, use it as the primary hashtag on their posts.

Post-truth defined as: “relating to or denoting circumstances in which objective facts are less influential in shaping public opinion than appeals to emotion and personal belief.” It is not an entirely new phenomenon – one of the first articles on post-normal was published in 1993.

So, why is this occurring at theintensity we experience it today?

The ease of information access has changed the public and policy dynamic. The internet is full of “facts” and easy access allows many to assume those facts need no further interpretation, synthesis or analysis. We also increasingly live in bubbles among people who are like ourselves, politically and economically.

The rise of 24-hour news coverage and social media have changed the news environment—opinion is an inexpensive way to fill the 24-hour news cycle. And misinformation gets disseminated on social media, where algorithms guide you toward stories and information that confirm your expectations and beliefs. Uncertainty – a concept scientists are very comfortable with -has left science vulnerable to criticism and exploitation by deniers.

Finally, people, politicians and organizations, can also intentionally or unintentionally amplify the effects for their own political or economic gain.

This is all neatly summarised in a study which was done in the USA by the RAND corporation that looks at “Truth Decay” which is the diminishing role of facts and data.

It states that there are 4 trends that characterize Truth Decay:

The consequences of decay in truth

Without agreeing on a shared set of facts, it is hard to have a meaningful debate about how to solve problems or work toward goals. This is as true for members of the public, public servants, politicians as it is for business and the media.

In the old days we sometimes called these boundaries – some parents and psychologists still call them this! In a global context, this equates to a rules-based order, that has, until now served us well, but is under threat, making countries like Australia particularly vulnerable as our diplomatic efforts are largely conducted within a set of well understood rules or boundaries.

More locally, think about what makes a vaccinated mother choose to not vaccinate her children. Increasingly, she may selectively gather information, have difficulty identifying facts in a sea of opinion, and she may not trust experts or pharmaceutical companies that once said Thalidomide was ok to use in pregnant women.

This is a decline in trust. And underpinning it is a growing inability to agree on basic facts – that is, an increasing disagreement about objective facts; a blurring of the line between opinion and fact; and an increasing volume of opinion versus fact – that is, Truth Decay.

It isn’t about an absence of facts – we know we have abundant evidence that vaccines have virtually eradicated diseases like smallpox, polio, and measles. And it is ok to have differing views, but when we can’t agree on the very terms of our public debates then things become dysfunctional. This threatens our democracy.

In 2018, the Wellcome Global Monitor was conducted -a study on a global scale that asks whether people trust science, scientists, information about their health, the benefits of science, the compatibility of religion and science.

It showed that 18% of people have a high level of trust in scientists, 54% have a medium level of trust, and 14% have a low level of trust. 73% of people trust a doctor or nurse above other sources of health info such as family, friends, religious leaders or celebrities.

Globally, 64% of people who have a religious affiliation and who say religion is an important part of their daily life, say that when there is a disagreement, the believe religion over science.

How should science and scientists respond to this? Firstly, by reading Craig’s book. Part of the response is to acknowledge that trust is not built on facts, it is built on relationships and values [you’ll love chapters 3 and 9].

And so, scientists need to be engaged in winning the hearts and minds of the community. It is no longer enough to engage with peers alone. And there are many ways to achieve this.

Some solutions lie with government, who would do well to better incentivise effective science communication. Many solutions are, however, at the fingertips of scientists themselves. And to better understand those, at your fingertips you will need Craig’s book.

Indeed, there is a growing evidence base for science communication. This book is the only one of its kind that draws together the relevant literature, media reports, surveys and other content. There is no better person to have trawled through it all than Dr Craig Cormick. And he has collected this knowledge into a very accessible and easy-to-read book, using humour and cartoons to reinforce the points being made. In short, it practises what it preaches.

For as long as I have known Craig, he has sought to not just create the evidence base but disseminate it as well. I recall the dark days of 2011, when we were all well-practiced in the deficit model – Chapter 3 will reveal all for those less familiar with this model– and Craig was conducting studies about what changes public opinion. And, low and behold, it wasn’t more facts.

His work in assisting organisations understand and communicate contentious technologies -like biotechnologies and (at the time) nanotechnology – was seminal and unique. Unless we know how to operate in a post truth environment, we will see continued failure on urgent issues like publicly (not scientifically) contentious issues like climate change, GM foods and crops, health advances, artificial intelligence and other new technologies. We have learned the hard way that just talking more about the science and holding up graphs with the facts on them does not work well.

The Science of Communicating Science – the Ultimate Guide by Dr Craig Cormick is published by CSIRO and was launched by Anna-Maria Arabia on 7 November at Harry Hartog in Canberra.