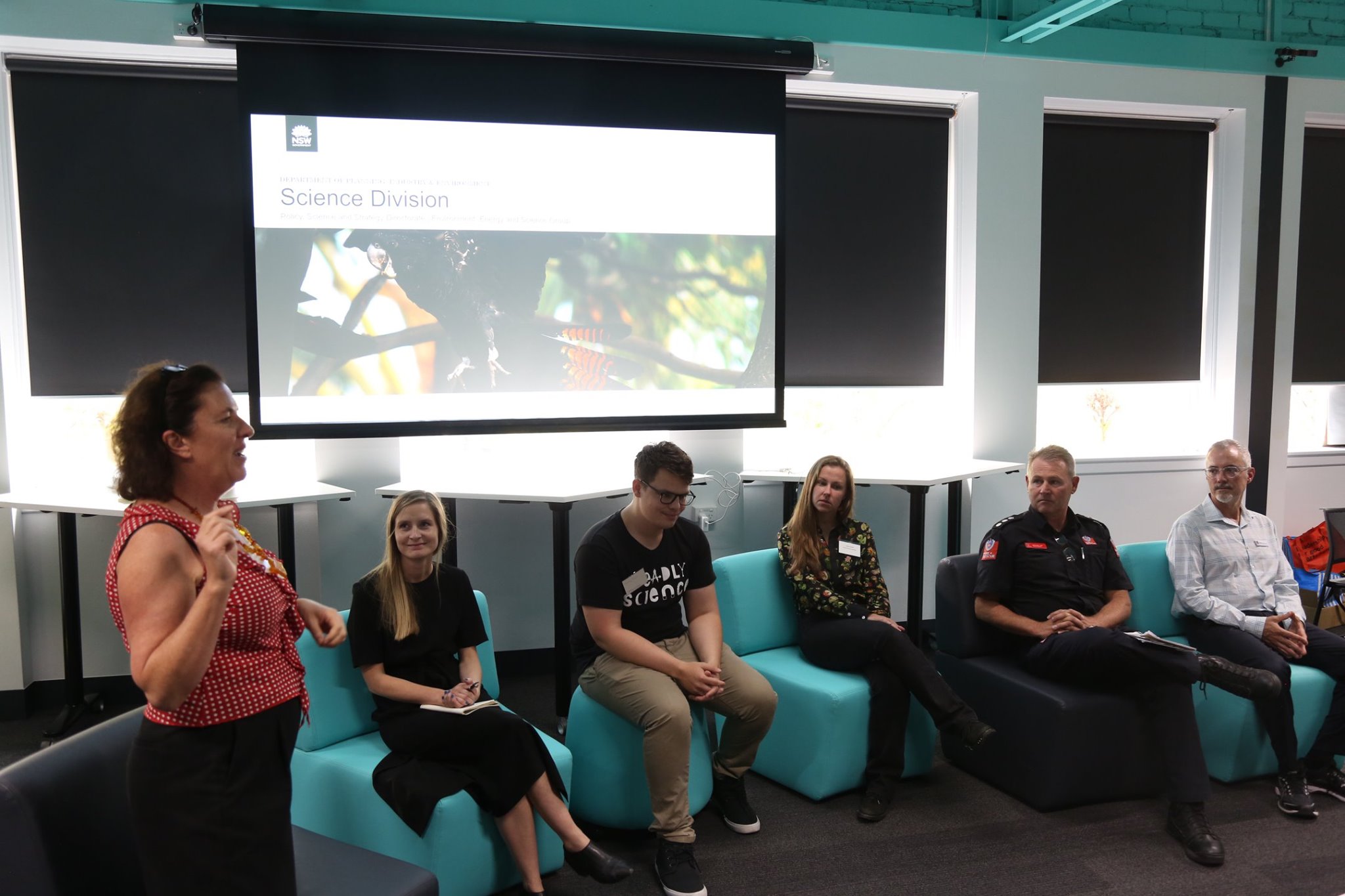 On 4-5 December 2019, twenty-five representatives of the NSW Regional Science Hubs network gathered at the Sydney Knowledge Hub to share their experiences in delivering science engagement programs in regional NSW. They were joined by eighteen guest presenters and network partners from across Government and the cultural sector who came to explore how this dynamic network is successful in connecting communities with science and technology and what potential there might be for future collaborations.

A consistent theme of the two-day Lab was the opportunity for other initiatives to take advantage of Science Hubs’ success in bringing diverse people and networks together. For the past seven years, volunteers involved in this initiative established by Inspiring Australia NSW have consistently provided community access to skills and scientific knowledge in creative and engaging ways. The time is ripe for other significant programs to invest in collaborative programs to raise awareness of science and technology in the regions.

The Lab kicked off with an insightful presentation from Michael Cohen from City People who spoke about science, technology, arts and place. Working at the interface of art and science, Michael’s career as an artistic director has explored place through the prism of physical characteristics, histories and futures. Science is part of this approach and often features in his work, perhaps best exemplified by various creations that led to Siteworks at Bundanon Trust.

“Our greatest asset is our specificity,” Micheal said.  “Places are everywhere. Place is a concept that goes through the body. It is a lived experience.”

“If you can think of a place, it’s a place. Events and cultural activities have an impact on place and associations are affected by such experiences. But the place itself also affects the experience.”

Michael described how arts and culture in all forms contribute to place and why this contribution needs to be recognised. He has developed a toolkit for valuing creative placemaking to determine its benefits, many of which are also relevent to community programs delivered by Science Hubs that examine local scientific knowledge.

In a workshop activity, Michael invited the Science Hubs to identify the value and benefits of engaging more deeply with a place via scientific and cultural knowledge using resources already available in their community.

Among projects identified were botanical activities to mark the International Year of Plant Health, an imaginative celebration of Spaceship Earth in the Riverina and an activation of Dungog’s historical common area where destitute people could once make a garden or keep a cow.

There were some fantastic ideas for popularising narratives around the koala and rehabilitating disused mines as a recreational Lakes District in the Hunter.

Also discussed was a curatorial proposal being developed for Transport for NSW by the CORRIDOR project to reactivate non operational transport sites for arts, science and culture use across NSW. This follows a number of previous place-based art/science projects including Ecologies in the Landscape, a botanical illustration workshop and the Big Little Histories of Canowindra community event.

Another idea underway in the Central West mapping Indigenous agricultural practices through archeology and chemistry to identify bush foods and medicines and connect communities to culture through science. This approach has been used successfully by Indigenous artists like Aleshia Londsdale, a guest presenter at the Lab.

Each place has its own stories, and all of these can form the basis of creative programs for art and science exploration in community settings.

Stories from the regions

Over the two-day Lab, a number of Science Hubs gave presentations about how they organise locally, what works well, what are their challenges and what they hope to do in the future.

Most regions have developed strong partnerships with Councils and universities where these exist. Others operate independently, with no official ties to any institution, yet strong alliances with community groups, accessible venues and local science and technology professionals.

Just like the organisers, Science Hub audiences represent broad demographics including Indigenous communities and people of all ages, from preschoolers to older people.

Programs are very much based on issues and topics that audience members have expressed interested in. These community-led partnerships are effective because they deliver popular programs that audiences want, sparking community conversations around science and technology issues in a changing world.

For this reason representatives from other science programs were invited to join a Knowledge Exchange session and discuss how Science Hub activities could be included in their respective public engagement plans for the future.

A highlight of the Lab was the Knowledge Exchange session involving diverse programs that explored how they might work with the Science Hub network.

From NSW Fire and Rescue, Acting Chief Superintendent Michael Jay considered how Science Hubs could extend the impact and reach of education around storms, fires and emergency rescue, with an emphasis on prevention and fire-readiness. In particular, there could be a vital role for Science Hubs to play after a fire to help people recover, connect with social services and mental health experts. The group discussed new approaches including to provide outreach in libraries or other community spaces.

In the NSW Dept of Industry Environment and Planning, Science Policy lead Tom Calabreeze described how his team is tasked with providing the best available scientific information about the environment to NSW decision-makers, providing critical foresight to program and policy design and implementation.

Science Hubs are well-placed to host Departmental scientists in an effort for them to educate communities about biodiversity, climate science and other issues. Promoting the reusable data sets available from the Department that can help people make more accurate predictions about future environmental conditions is another area where Science Hubs might add value.

Representing the Museum of Applied Arts and Sciences, science producer Catherine Polcz discussed future possibilities for regional engagement with the Science Hubs including the potential for two-way exchanges and residencies. Sharing resources and events via digital platforms was also discussed, as was the way seasons have a huge impact on the behaviours of people in different regions. Importantly, Science Hubs were able to express their desire to have programs come to them rather than an expectation that regional arts and cultural practitioners always attend programs offered in the city.

At the NSW Department of Primary Industries’ Plant Pathology collection, Dr Jordan Bailey oversees the Biosecurity Collections and is seeking to revitalise and promote them as the official pest and disease record for NSW. Ideas canvased with the Science Hubs included engaging communities through a PathoBlitz/Biodiversity Blitz and Citizen Science approaches to engaging community members to help identify plant diseases.

On the second day of the Leadership Lab, artist Aleshia Londsdale led a rich discussion on working with Indigenous communities on science-related projects. Key themes included the need for respectful communication, listening to Indigenous people and hearing what they say.

“Show respect and you get respect. Don’t come in with a specific project. Rather, approach a community with a flexible idea and be sure to co-design any opportunity with them,” Aleshia said.

Working with Arts Out West and as Chairperson of the Mudgee Local Land Council, Aleshia has assisted Indigenous community members to explore science in all kinds of creative ways, always guided by their unique interests.

She said that being flexible, respectful, listening and valuing Aboriginal knowledge as equally important as science knowledge are the most important things to keep in mind when working with Indigenous communities.

“The best projects are where people feel like they’re a part of a project from the beginning,” Aleshia said, warning that consultation is not the same thing as consent.

Her suggestions for best practice engagement:

Aleshia then provided some examples of how she works with Indigenous communities in the Central West to explore Indigenous scientific and cultural knowledge.

One project enabled community members to gain access to mining sites where they have been able to reconnect with tools and other artefacts brought back to Country. Working with a chemist and an archeology expert, participants have been able to identify pollens and other traces on stones and spear heads and discover which animals were killed by spears and what plants were worked on with grinding stones.

Testing samples on Country, Aleshia’s community has been able to learn more about its histories and sacred places.

“Having an archaeologist involved was really helpful because people could use the scientific instruments to test samples and discover exactly what chemicals were used and their significance in terms of bush food and medicines,” Aleshia said.

After Aleshia’s presentation, others joined the discussion with examples of other cross-cultural projects involving Indigenous science.

Este Darin-Cooper from Creative Partnerships Australia worked with the Science Hubs to develop comprehensive fundraising strategies in a practical workshop that explored the fundamentals of philanthropy, motivations for donors and the importance of developing meaningful relationships with financial partners.

Collaborate with the community

The most important message to emerge from the 2019 NSW Regional Science Hub Leadership Lab is that for public engagement with science and technology to be transformational, communities themselves need to decide what topics they will explore, why and how.

Thanks to the Science Hubs, welcoming events and programs across NSW are attracting big audiences and having a ripple affect in many communities across the state, improving scientific literacy and deepening understanding and connections to place.

All voiced a pressing need for professional assistance with managing the administration of Science Hubs, particularly in order to sustain volunteer commitment and energy. What is needed most is increased funding to nurture these community partnerships and relieve committed volunteers from a growing administrative burden as networks continue to evolve and numbers of projects increase.

Science Hub members look forward to further collaboration within and across their communities in the coming year and have unanimously agreed to focus on climate science in their 2020 programs, with fire, water, soil, habitat, species loss, mental health and Indigenous scientific knowledge front of mind.

Thanks to all those who participated in the Leadership Lab and to the hundreds of partners involved in delivering inspiring local science engagement programs across the state. Inspiring Australia NSW is indebted to this dynamic network for achieving its mission to create big audiences for science and technology researchers.

By Jackie Randles, Manager Inspiring Australia NSW. Thanks to Geoff Crane and Taylor Szyszka for the photos. The NSW Regional Science Hub Leadership Lab was convened by Jackie Randles and took place at the Sydney Knowledge Hub, University of Sydney, 4-5 December 2019.