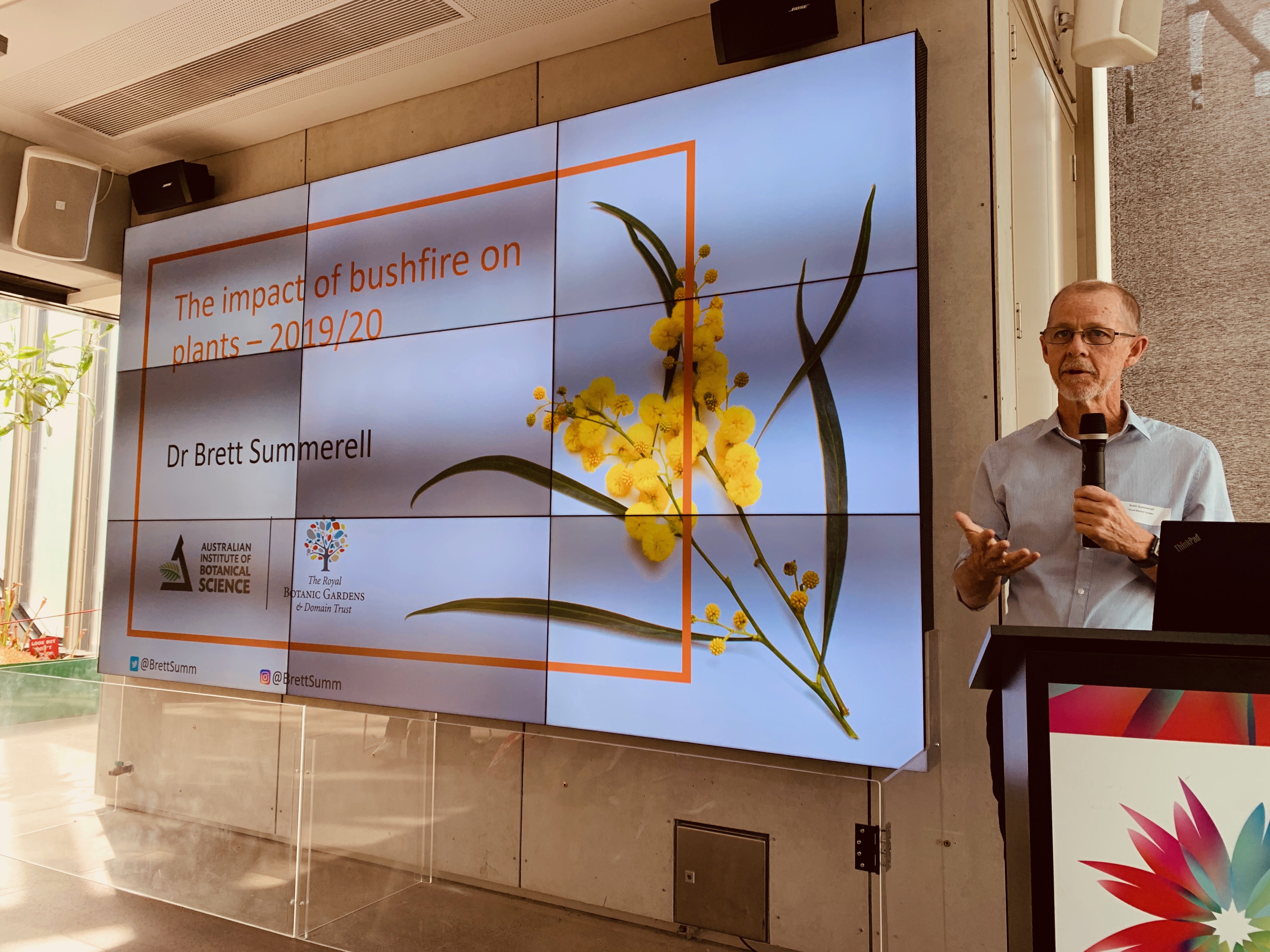 Over the past seven months, intense bushfires have caused devastation across Australia. Communities continue to rebuild homes and businesses – but what has been the impact on the natural world? Speaking at the Inspiring Australia NSW Stakeholder Briefing on 9 March 2020, Dr Brett Summerell, Chief Botanist & Director Research at the Royal Botanic Garden Sydney, discussed the loss of plant life as a result of the bushfires and the potential long-term effects of this crisis.

While it is difficult to estimate the number of plants impacted by fires, Dr Summerell reported that 5.3 million hectares have been affected which included

In terms of devastation to our national parks, fires have affected 80% of the Greater Blue Mountains world heritage area, 40% of NSW’s state forests, 37% of national park estate and 4% freehold land.

The number of animals killed in NSW alone is estimated to be more than 800 million, with a national impact of more than one billion animals.

Over centuries, Australian flora has evolved with fire. As the continent has become more arid, species such as eucalypts and wattles have come to predominate, and these plants now having numerous adaptations to cope with fire.

In eucalypts, epicormic buds protected by bark have begun to spring to life. And with recent rains, the seed of wattles and banksias will continue to be stimulated to germinate and grow. Ferns regenerate rapidly after fire, in particular Bracken fern that can dominate recently burned areas.

In some cases after fire, plants that have not been observed for a long time start to appear.

The extent of recovery depends on the intensity of the fire. Lower-intensity, rapid fires do not substantially damage eucalypts, and stimulate germination of seed of a range of species. If the fire is high intensity, we see trees killed and an almost sterilisation of the forest floor. In these situations, the loss of plant diversity can be profound.

In ecosystems that are not adapted to fire, the losses can be much higher.

Rainforests have not evolved to cope with dry conditions or fire. Trees in these forests are often thin-barked and easily killed by bushfire heat. Their seed is designed for dispersal by animals and not the stimulation of fire. When these habitats burn, the outcome is poor.

The impact of fire on threatened plant species will be variable, depending on local conditions and the distribution and intensity of the fire. Dr Summerell warned that it will take a long time to assess the situation across ecological communities around the country.

Monitoring the impacts on ecosystems and individual species –especially threatened species and restricted endemics – will be critical. With the expectation that climate change will continue to facilitate fires in the future, Dr Summerell argued that we need  to continue to pursue research on the impacts of changing climate and fire frequency.

We should also be looking to preserve more plants in seed banks and at botanic gardens. He also calls for increased research to understand the response of plants to a changing climate, in particular through collecting Australia‘s 25,000 or so plant species and understanding their genetic diversity.

When it comes to planting trees, Dr Summerell said that species selection after a bushfire is critical. Among considerations that first need to be taken into account are these questions:

Dr Summerell said that any decisions around species selection need to take place well in advance of planting programs. Fortunately, there is research data available that can assist in this process by helping to provide direction for planners and for industry.

Soil preparation is another key factor that must be addressed before planting takes place, as is post-planting care, a long-term commitment that is necessary for a successful outcome.

A tree needs to be at the right stage of growth when planted, soil prepared, water and nutrient programs in place and the growth of the tree monitored to ensure branches and stems are trained so that there are no structural weaknesses resulting as the tree matures (decisions not made in early growth can cause branch or tree failure a decade or two later).

How can you help?

Dr Summerell encouraged all those wishing to aide recovery efforts to consider financially supporting appropriate organisations. For those wishing to do some on the ground work, he recommends joining a bush regeneration group.

There are also many Citizen Science projects seeking photo documentation of fire damaged ecosystems such as the iNaturalist Environment Recovery Project.

Most importantly, Dr Summerell reminded us to be sure to go into fire affected areas carefully, making sure not to introduce weeds or diseases to vulnerable areas. Cleaning footware with a good spray of 70% methylated spirits is strongly recommended.