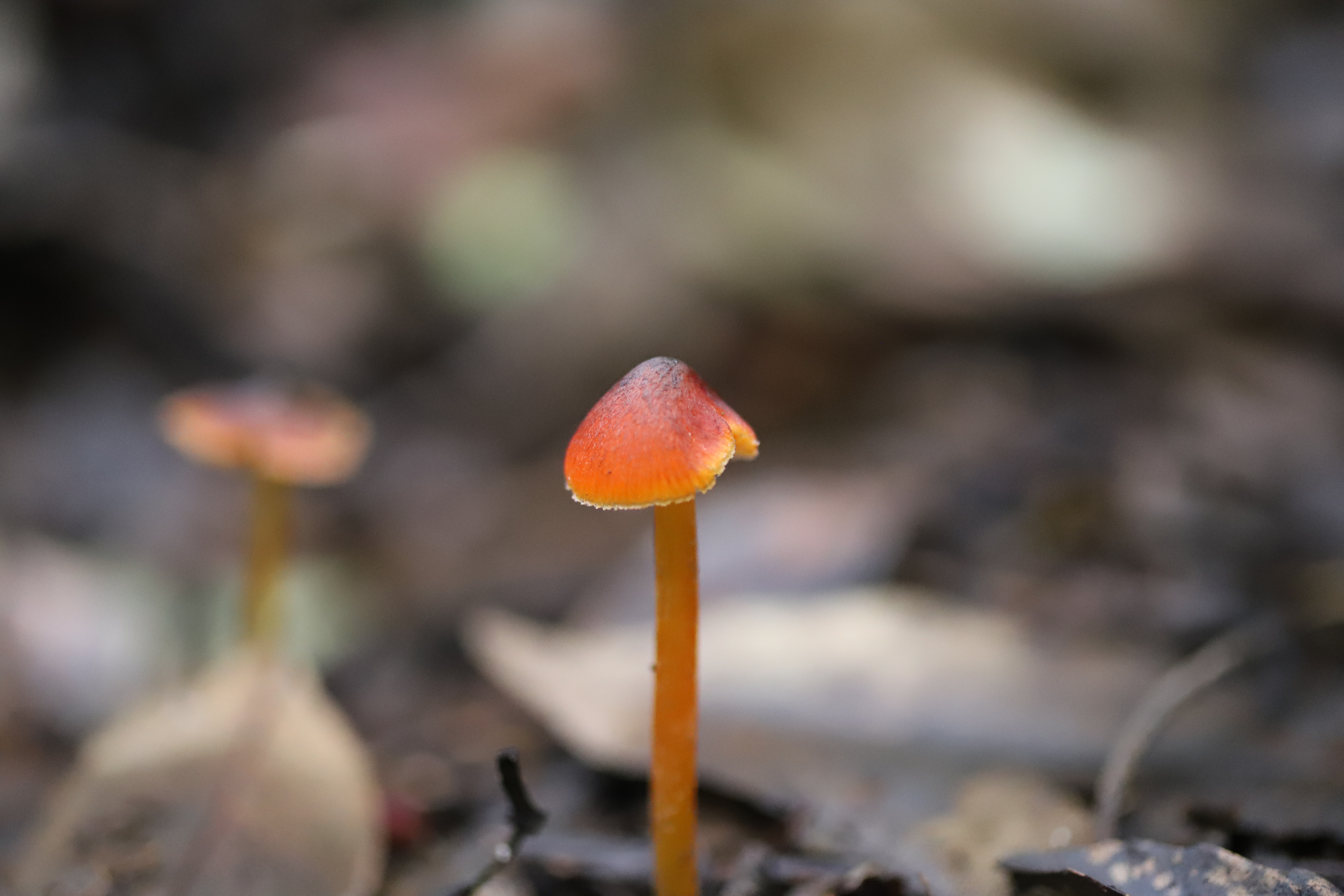 In preparation for the upcoming Plant X online program to be presented by the Orange Cowra Cabonne Science Hub in National Science Week, a group of scientists ventured into the Sassafras Gully in Springwood to survey fungi. This collecting trip was also part of a larger project looking at the diversity and distribution of native Hygrocybe species, commonly known as Waxcap mushrooms.

Throughout the expedition, Meagan Hinds from the NSW Department of Planning, Industry and Environment was interviewed about her work and how it relates to the International Year of Plant Health.

“Several species in this group are considered endangered or vulnerable and that’s why the NSW Government Saving our Species program is trying to assess their range and occurrence,” said Meagan, who, accompanied by an ever-changing team of enthusiasts, has headed out several times during the Waxcap fruiting season of April to July to hunt for these tiny mushrooms.

Luckily, they are brightly coloured, coming in almost every colour of the rainbow. On the Sassafras walk, many “ooohs” and “aaaahs” rang out throughout the forest as the party stumbled upon reds, oranges, yellows, purple and even green!

While Fungi are not plants, they are actually more closely related to animals,” said Meagan, who works on a variety of species of monitoring for the Saving our Species program and will also be conducting some post-fire monitoring of species.

Also on the trip was local fungi expert David Noble, Dr Jordan Bailey, Curator of the NSW Plant Pathology & Mycology Herbarium, and Phoebe Cowdery from the Corridor project and Samantha Andres an, ecology researcher from the Hawkesbury Institue for the Environment at Western Sydney University.

Many specimens were collected for Jordan to take back and photograph at the Herbarium. There, she will also take sections for DNA extraction and microscope examination for identification, and then freeze dry the specimenst to preserve them for long-term storage.

“Currently the Herbarium collection is 130 years old and holds over 120,000 specimens safeguarded for future generations of researchers,” said Jordan.

The collection is the official disease record for NSW and the official repository for mycology specimens collected in the state.

The resulting videos will form part of an engaging series of online workshops presented in National Science Week in which audiences will be invited to participate in explorative activities to investigate the health of plant systems, including pest diseases and beneficial insects.

“Scientists monitor plant health and biosecurity in all kinds of ways, and we have devised the Plant X program to show audiences how they work,” said Jordan.

“Our objective is to interview scientists in the field across a range of disciplines, and then to encourage audiences to go out and collect specimens of their own for further exploration through microscopy and art. They will be instructed through videos in the art of scientific illustration and stop motion animation led by renowned artists Angus Fisher and Todd Fuller along with botanical illustrator Heather Valance,” added Phoebe.

And as an added incentive to get hands on, registered Plant X participants will receive activity kits by mail that will include a Phone microscope lens and other fun freebies.