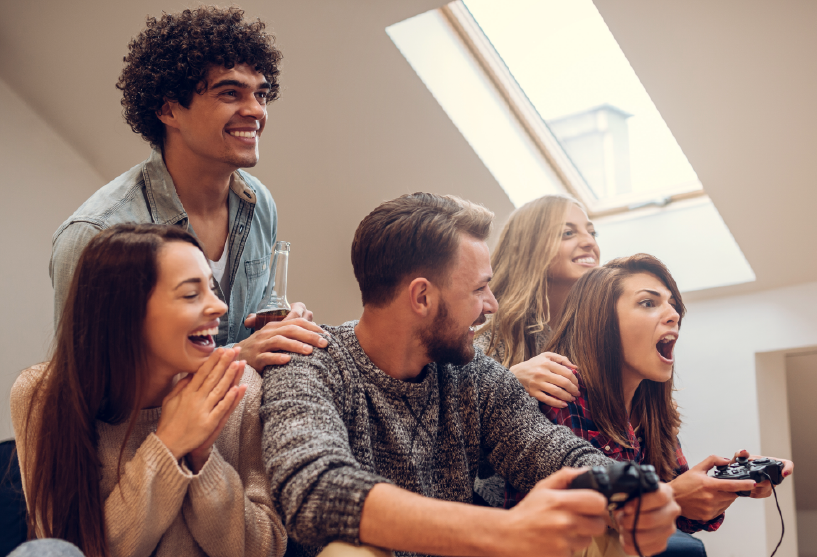 A team of scientists are using videogames to spread science, sharing their love of science with the next generation. Join them in #BatteryLow this Science Week! Viewers spent over 1 million hours watching and interacting with videogame streamers on Twitch in January 2020 alone. This grew to over 1.6 million hours a month throughout the COVID-19 pandemic.

It’s this drive for engaging online content that drove UNSW’s Associate Professor Michael Kasumovic to do something different this National Science Week. Rather than asking people to come to a science event, Michael is bringing science to one of the most popular activities of the decade: videogame livestreams.

“With everything that’s going on in the media, I think the relationship between scientists and the general public is very strained, and it’s not something that will easily be fixed,” says Michael, the organiser of the #BatteryLow National Science Week event that will be livestreamed for all Australian’s to watch.

“People see scientists as individuals who work in ivory towers and have an agenda, but that couldn’t be further from the truth. They’re just regular people that are interested in exploring and understanding the world.”

This is why Michael thought that it would be fun to place scientists outside of their regular comfort zone and place them where the regular public – especially teens and young adults – usually reside: in front of a videogame screen.

“I’ve found 15 awesome and diverse young scientists that research a whole range of topics from how economic theory can improve honeybee foraging to why it’s difficult to quit smoking, to understanding how our universe is formed.”

Michael is taking these young scientists, sitting them on a couch, and playing videogames with them.

“The idea is that concentrating on the games will make it a relaxed experience where the scientists can chat with each other and the public.

“These are people that love watching videogames, but what if we could get them talking and asking questions about the science these researchers do while we’re playing videogames – how awesome would that be?”

You can feel Michael getting excited about the livestream as he talks about it. He hopes that seeing scientists as regular people, highlighting their curiosity, and demonstrating that scientists don’t know all the answers may help to repair the relationship between scientists and the public.

“As a lecturer, I’m always looking for that ‘teachable moment’ – where learning can happen in the most unexpected times and places”, he said, adding that videogames can present that opportunity.

The #BatteryLow event will be livestreamed during and after school hours where Michael hopes that teachers will tune in with their classrooms and parents will sit down with their kids to share in the moment.

To prepare for the event, Michael has been streaming the educational games he’s created with his Company Arludo on YouTube and Twitch over the last few months.

“Being an engaging streamer is not easy, especially if you’ve been a scientist your whole life! But I wanted to try something different to engage younger generations and get them excited about learning science.”

Meet some of the participaing scientists

“I think it’s important to keep reaching out to the public in different ways to engage people who wouldn’t normally be interested in science.” Says Kirsten Banks, an astrophysicist and one of the scientists joining #BatteryLow. Known as @astrokirsten on Tik Tok, she’s seen her love of the universe spread to over 11,000 followers leading to more than 200,000 likes.

“I think what Michael is doing is great and really different, ” said Caitlyn Forster, who also decided to be a part of the program.

“I’ve done a lot of outreach, but this is really new”. Caitlyn is the researcher exploring economic decision making in honeybees and is excited to share he research with the public in a new way.

There are even scientists that don’t play any games at all like Zoe Xirocostas, a plant ecologist researching invasive species.

“Michael’s assured me that the day won’t be competitive and that’s it’s a lot of fun” she laughs. “I’ve known him as a lecturer at UNSW so I’m pretty sure this will be pretty laid back.”

To celebrate the event and get folks excited, Michael is highlighting a new researcher each day on his Twitter and Instagram accounts. His goal is to help the public understand why these scientists do what they do each day and what makes them interesting. Michael’s learned that amongst his 15 scientists, there are cosplayers, singers, saxophonists, artists, rock climbers and so much more. “But you’ll have to follow my socials to see which scientist does what!” laughs Michael.

#BatteryLow will run online on Friday August 21st from 11:00am – 6pm. Further information on the show and the scientists can be found at https://arludo.com/scienceweek