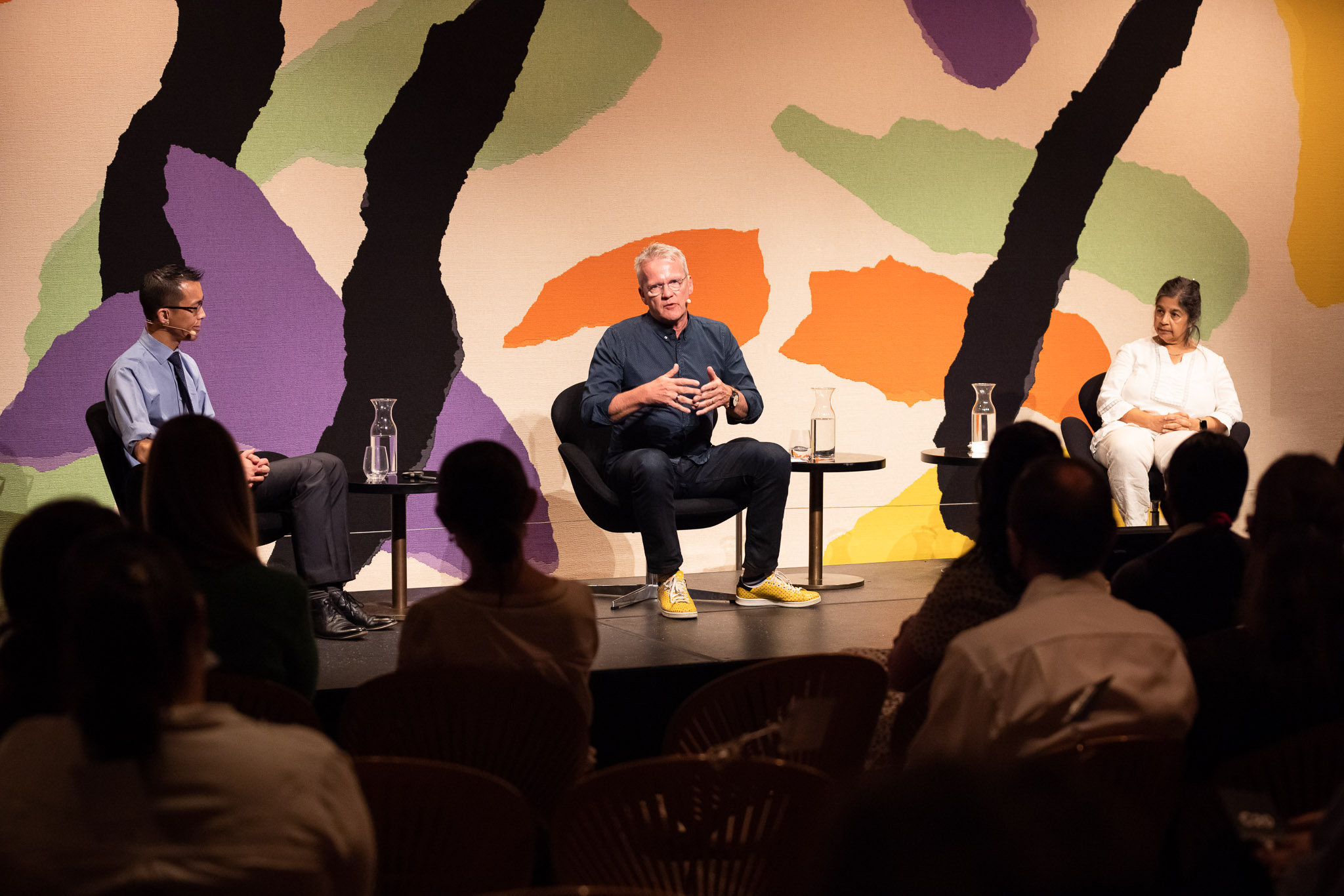 Two celebrated Australian mathematicians were the inaugural guests of Professor Pasi Sahlberg from the Gonski Institute at UNSW who is leading a series of urgent conversations with the community about the Australian education sector.

The trio discussed what makes mathematics beautiful and how to get students to love it in a wide-ranging conversation about the role of creativity in mathematics learning and the much-needed urgency for Australian education reform.

Pasi began the conversation with a simple arithmetic activity that most of the audience failed – as he admitted they always do when presented with this task. He then shared insights from his own experience of being a maths teacher in Finland where many of his students strongly believed they disliked maths.

“Children hated maths even before they had done it and we wanted to understand why,” he said.

Pasi and his colleagues tried to find out why students held such strong beliefs about maths. They asked students to draw a picture of what mathematicians at work looked like and invariably the responses were similar: mathematicians were always depicted as being male.

Other observations children made about mathematicians in their drawings depicted them as:

So striking were these common observations by children that Pasi and his colleagues published a paper about their findings: see Sahlberg, P. & Berry, J. (2003). ‘Small group learning in school mathematics: Teachers’ and pupils’ ideas about group work in school.” University of Turku: Finnish Educational Research Association.

Fixated on their calculations and with little time for friends, fun, families nor fashion, it’s no wonder that social and fun-loving students quite often would not see mathematics as being something for them.

While Pasi’s anecdotes are amusing, they explain a key challenge facing teachers trying to engage students with maths: the underlying notion of mathematicians as being isolated and outside mainstream culture. It is therefore critical for educators to actively show young students the diversity of who becomes a mathematician as well as the wide range of interesting and enjoyable maths careers.

Finding ways to engage students and the broader public with the joy, creativity and relevance of mathematics was the theme of the discussion that followed.

Changing how we feel about maths

With more than 800,000 subscribers on his Wootube channel, Eddie Woo proves that maths can be fun and playful. Eddie’s passion for education is infectious and he is known for assisting thousands of students to conquer their aversion, fear and dislike of maths. Changing fixed attitudes about maths has been key to Eddie being able to assist students to overcome significant barriers to how they think about it.

“I want to change how you feel about maths,” he said.

Much loved by mathematicians, M C Escher did not himself recognise the mathematics in his own works – hence he is sometimes known as the ‘accidental mathematician’.

Eddie demonstrated the creativity in mathematics by reflecting on its presence in a series of M C Escher drawings through which he discussed concepts of infinity, perspective and space.

Eddie went on to explain the fascinating mathematics that underpins Utzon’s iconic design of Sydney Opera House, its shape created from rearranging sections of a sphere. He concluded his address with a second series of challenges to the audience as he used scissors to cut through paper loops and invited us to guess the outcome.

Discovering mathematics at your own pace

The audience was then treated to a personal reflection on being a mathematician by the first female Professor of mathematics ever appointed at the University of Sydney, Nalini Joshi.

Nalini shared moving stories about her life in mathematics. She was born in Myanmar where her father was in the military at a time of great social and political upheaval.

Nalini’s mother describes that time in their lives living in the area known as the ‘Golden Triangle’ as being the very worst. But as her parents struggled with extreme challenges, from racism towards people of Indian background to the dangers of living amongst drug barons in turbulent times, Nalini recalls a happy childhood of immense joy and freedom: she spent hours and hours playing hopscotch and other games that introduced her to numerical patterns.

Nalini said her love of mathematics developed as she discovered patterns at her own pace.

The family moved to Australia where Nalini’s passion for learning and mathematics continued. She spoke fondly of her high school maths teacher who allowed her to be behind scheduled class work so that she had the time to explore concepts in ways that interested and made sense to her.

“I really wanted to know things,” she said, adding that working things out for herself was how her interest in mathematics deepened.

“I became entranced with number patterns and was voracious for knowledge,” she said. Nalini was a gifted student who devoured all the books in the school library, so it is not surprising that when she became a mathematician, she became one of this country’s most highly esteemed academic leaders.

Nalini, like Eddie, is also married. Each has a family and many other interests, among them art and music – a far cry from the stereotypes depicted in drawings by Pasi’s students.

What needs to change?

Over the course of the evening, various issues were discussed from teacher confidence, the crowded school curricula and the limited capacity of teachers to introduce creative learning concepts into schools due to an enormous volume of work to Australia’s inflexible and unpopular testing regime.

“There’s not enough time nor room in a year to teach the set curriculum effectively, so you can’t let students explore for themselves – there’s no time to do that,” said Nalini.

Pasi hopes that by holding community conversations about education in Australia, we will be able to reimagine school education to meet the needs of the future.

In an opinion piece developed for the Sydney Opera House he writes:

“We have great teachers across this country who are willing to go above and beyond to make sure we will do what we promise to all children. Parents and community are important players in determining what Australian education could look like. Their opinions and perspectives shape the way politics behind education are handled. That’s why open and candid conversations between community members are so important.”

The purpose of these conversations is not to try to solve any of the current challenges in our school education – but to offer new perspectives and opportunities to be part of interesting conversations with others.

Read more about The education conversation Australia has to have

In collaboration with the Gonski Institute, the Sydney Opera House will host more evening conversations about current issues in Australian education.

Attend the next two sessions: