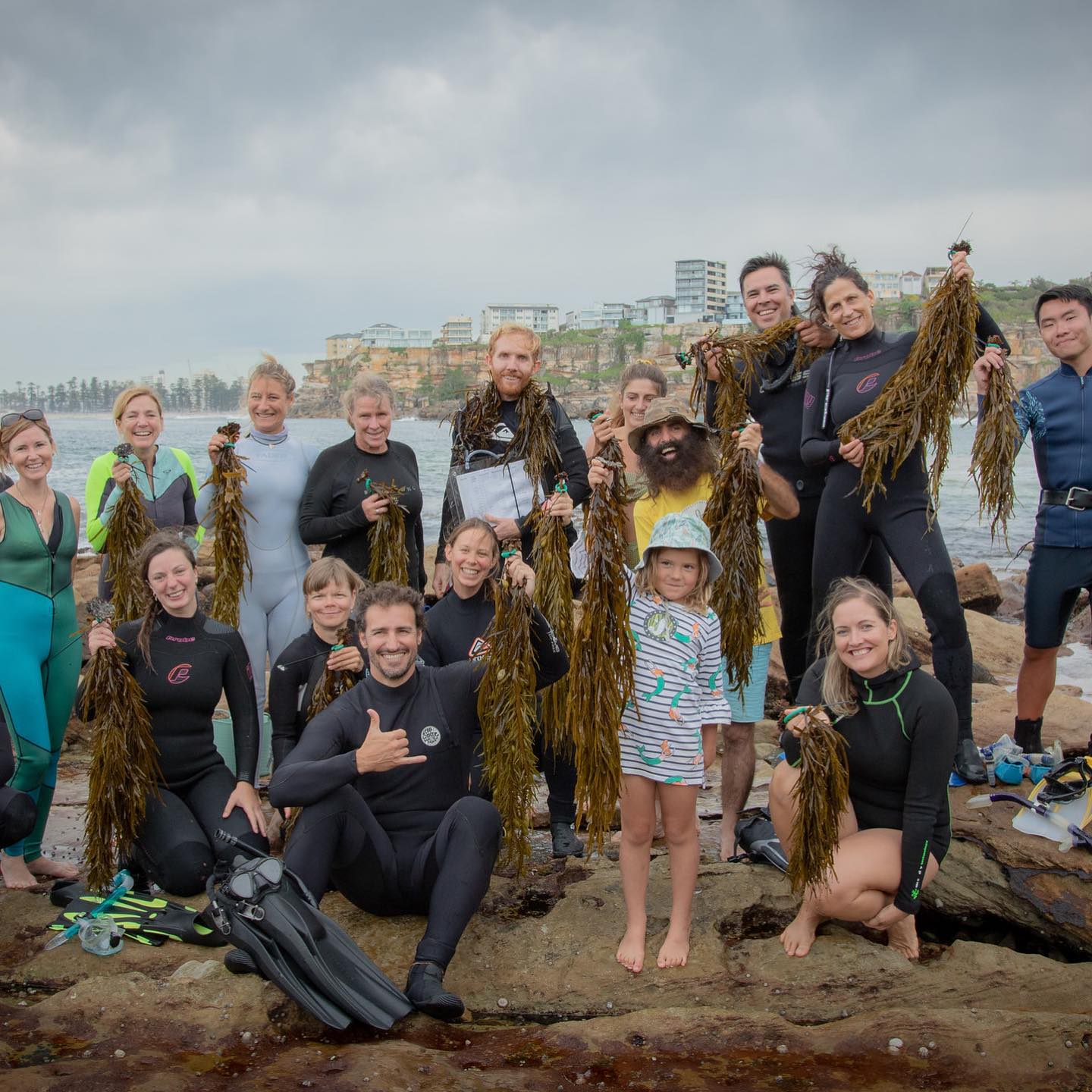 Manly’s inaugural Seaweed Forests Festival continues until 9 May 2021, celebrating Australia’s remarkable underwater forests through science engagement and the communicative power of art. At the official Festival launch on 21 April, UNSW marine scientist Dr Adriana Vergés spoke about her research into the kelp forests of the Great Southern Reef. Artists Jennifer Turpin and Michaelie Crawford explained the motivations behind their stunning Seaweed Arboretum and the celebrated Australian Olympian Dr Shane Gould spoke of her deep relationship with the ocean.

Australia is famous all over the world for its natural environment and its wildlife. On land, our continent is home to some truly unique species that are found nowhere else on Earth, like the platypus or the koala. Underwater, we host growing populations of migrating whales as well the largest coral-reef in the world – the Great Barrier Reef.

With this exhibition, we are celebrating another unique ecosystem but one about which we know much less: It’s called the Great Southern Reef. It’s 8,000 km long, extending from Byron Bay in the East Coast all the way down to Tasmania, along the entire southern half of the continent and half way up Western Australia.

Just like the Great Barrier Reef is defined by its network of coral reefs, what connects the much longer Great Southern Reef are underwater seaweed forests.

These seaweeds are essentially the engine that fuels the ecosystem. They absorb CO2 and turn it into biomass which produces dense and highly productive forests that provide shelter, food and home for hundreds of species.

The Great Southern Reef has the highest number of seaweed species in the whole world, and a very large proportion of these species are found nowhere else on Earth.

These seaweed forests have been providing food, medicines and materials to Indigenous Australians for millennia and they continue to do so today. They also sustain our most valuable fisheries – like the rock lobster and abalone.

Unfortunately, however, many parts of the Great Southern Reef are in trouble. In Tasmania, for example, we have already lost 95% of our giant kelp forests. In Northern NSW, we are starting to lose our golden kelp forests. And here in Sydney we lost forests of crayweed over the entire 70 km of metropolitan coastline due to pollution.

But with marine restoration projects like Operation Crayweed, which I am proud to be part of, we are successfully restoring crayweed and reversing the local extinction of this species. Operation Crayweed shows that we can use science to overcome these losses. But when it comes to conserving seaweeds and the Great Southern reef, we do have a PR problem that needs to be overcome.

Although over 70% of Australians live along the shores of the Great Southern Reef, most people have never heard about this ecosystem or the seaweeds that underpin it. And we can’t protect what we don’t know.

And this is where this wonderful artwork and this month-long festival comes in.

As scientists, we can provide the facts and figures about seaweed. But we know this information on its own cannot motivate people to care and protect habitats. And this is why we have been collaborating with artists Jennifer Turpin and Michaelie Crawford for many years now, in an effort to create links that can emotionally engage people and get them to care about these incredibly important seaweed ecosystems that enable so many other species to flourish.

Art and science are long-term partners. They have a lot in common. Both disciplines are inherently creative and curious, and often share an intense connection to the natural world. Both get involved in experimentation with natural phenomenon and investigation into nature’s life forms.

In our age of human-induced climate change, science provides the critical knowledge underpinning our need to respond effectively – and art has the potential to play a powerful role in positively transforming our relationship to the environment.

Art can engage the imagination and the intellect through a different, more intuitive language. Drawing upon, and complementing the knowledge of science, it can reveal the unknown, remember the forgotten, and focus our attention on what we have taken for granted.

Together, art and science can illuminate the complexities, interrelationships, beauty and wonders of this world that we share with all other plants and animals.

About the art on display at the Seaweed Forests Festival

Three artwork installations together form the Seaweed Arboretum. They create ‘seaweed habitat’ for the festival talks and events over the 5-week exhibition at the Manly Art Gallery and Museum.

Over the past year, we have worked with a diversity of seaweeds from NSW and South Australia- we’ve collected, handled, pressed, dried, sculpted and shaped them into the artworks you see here. And we’ve presented these marine plants more or less ‘as they are’ – gently sculpted into forms expressive of their inherent characteristics, exquisite structures and surprising substance.

The Seaweed Arboretum is also the realisation of the plants’ journeys from shoreline to gallery.  The year-long process of the artwork’s production is an expression of a ‘dialogue’ between artists and plants. These organic beings, whilst no longer ‘alive’, still have a life of their own as they yield and not yield, ‘suggest’ and ‘respond’, within the process of transformation, as they transition from their aqueous marine forests to our terra firma world.

My interest in seaweed forests and how they fit in with the whole ecology of the ocean waters I swim in, began with two very good school geography teachers. The first teacher taught about ecosystems, such as how the water cycle functions, that is, the dependency of one component upon the other. The second teacher took my class on a field trip to the rock platforms at Long Reef on the northern beaches of Sydney.

They explained how the tides worked, the role of wave swash for feeding and washing the reef. The most amazing dynamic to me was the interdependency of the animal and plant life in rock pools and exposed reef. You could see these weird and wonderful creatures and plants living effectively together, right there to observe, without fanfare, just doing their thing in beautiful and clever ways.

I have been an ocean swimmer since my father swam amongst coral islands with me and my sisters when I was small, growing up in Fiji. I further enjoyed the ocean in primary school years learning to body surf at NSW beaches, becoming brave with my older sister and familiar with floaty things (seaweed, jelly fish) in the water by regular exposure. Swimming in the ocean helped my pool swimming.

In my teens, I learned to ride surfboards which involved at times, wiping out on rocky headlands or shallow reefs, using seaweed meadows and forests as a cushion or hand hold, until the wave turbulence subsided.

More recently in the last 20 years, I have been enjoying open water swimming for social recreation, fitness and occasional racing. I swim most days at dawn with other people, in the cold water of east coast Tasmania for about 20 to 40 minutes.

Our tracks in the surface are as though we are ‘wandering’ around in the bays of Bicheno, over kelp, seaweed, white sand and granite rocks. It’s like a saunter in the bush without a path, sometimes energetic or sometimes strolling. Sometimes it’s about the breath and exertion of interacting with the water, other times it’s like sightseeing.

The sea and weather conditions always change what the surface is doing. Often it is still and glassy, other times, after a storm we’re pressing through chaotic white caps and rafts of floating seaweed ripped from their rocky moorings by the swells.

The people in our swimming group share our discoveries of the day at the end of the swim, always with wonder and curiosity. I wonder what that jelly thing was? Or did you see that school of mullet? Or did you see Holy Moses ( a large territorial stingray)? I love the kelp fronds swaying in the surges of waves over the sand. The curly tips look like a woman’s long golden curly hair fluttering in the breeze standing on a headland looking long-fully over the ocean to a lover or time to come.

The thread in all of these anecdotes is the wonder of ecological systems particularly that transitional, liminal zone, where the land isn’t all land, and the sea is also land.

Humans are metaphorically amphibious in this beach-sea zone. It’s a place to ‘dwell’, the idea of being human, in place, where we can live and be with a sense of joy and wonder, or caution and unease. I mention unease or dread, because it a valid sense, as a cautionary emotion to keep us safe, it’s OK to have some fears or dread of the ocean. As long as it can be rationalised and managed so it doesn’t prevent opportunities to be amphibious, while still keeping oneself calm and safe.

When I was told, by Scott Bennett, of the naming/describing of the Great Southern Reef, I was excited to be involved in sharing my experiences of ‘dwelling’ and wandering in the waters of Tasmanian parts of the extensive reef system.

As an underline, a cradle of the continent and islands of Australia, the Great Southern Reef was also an underline of my understanding and wonder of the interconnectedness of human life with geographical places environmental systems. It is also a reminder of lost saltwater lore and knowledge of seafood food gathering, that I hope to help partially recover collaboratively, with Tasmanian aboriginal women.

In the even bigger picture, the Great Southern Reef and the Manly Seaweed Forests Festival reminds us of our human interdependency on the atmosphere, land and oceans and diverse social human communities to live and thrive together.

Inspiring Australia NSW thanks the speakers for sharing their presentations. The Seaweed Forests Festival runs from 9 April to 9 May 2021 at the Manly Art Gallery and Museum. It is presented by the Sydney Institute of Marine Science and is generously funded by the My Community Grant program from the NSW Government. Learn more about the Seaweed Forests Festival and its extensive art and science program