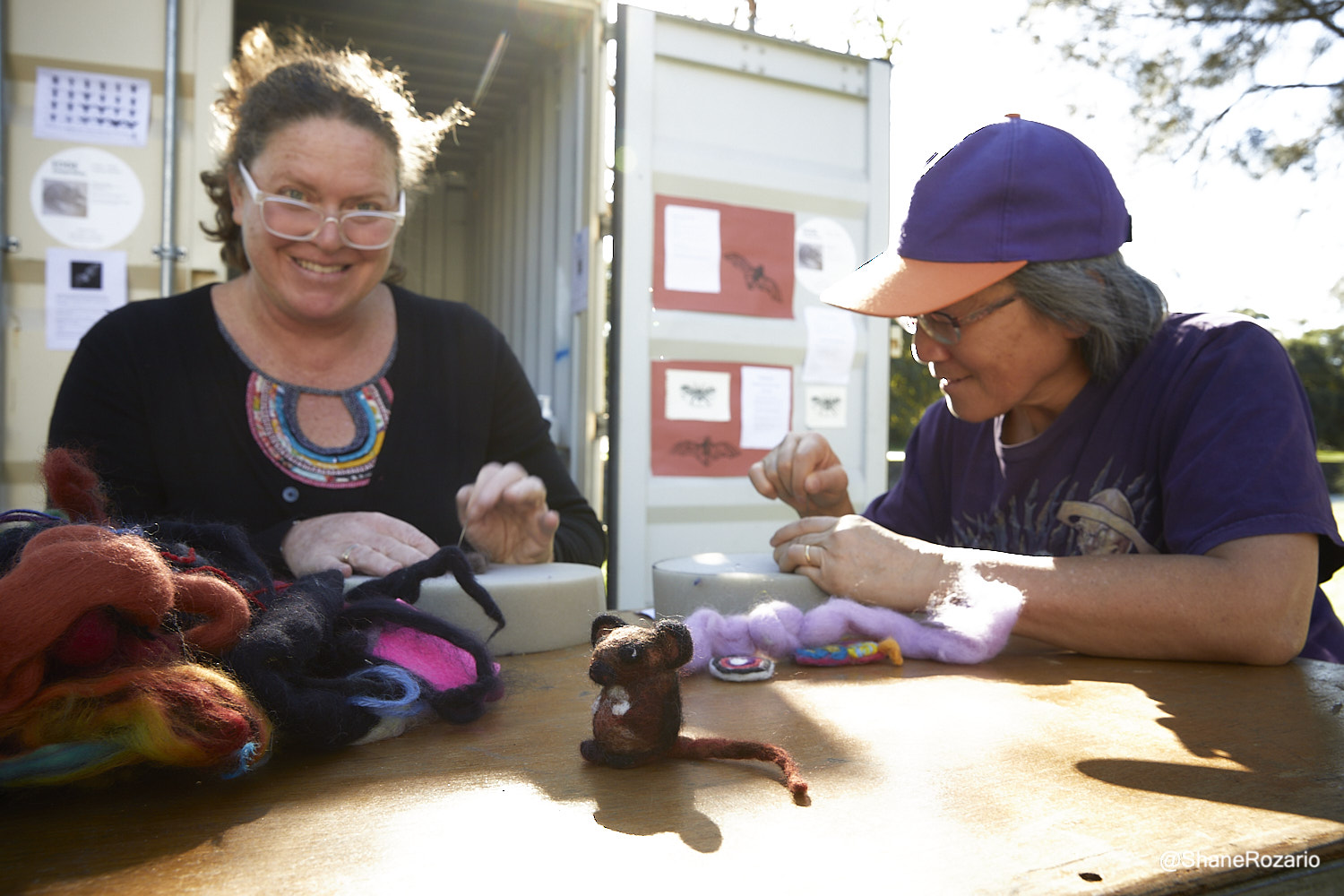 The Greenway is a really interesting site that links green spaces from Dulwich Hill to Iron Cove. It was an ideal place to hold an Art Camp that brought together a diverse group of creatives to experiment, collaborate and develop new work over three weeks.

My residency has been based in a shipping container on Hawthorn Canal under a stand of Casuarinas. It’s a fantastic natural and artistic locale. I love the mix- dog walkers, footy players and artists who are busy dreaming up new work.

The Art Camp itself is an amazing initiative and I’ve been grateful for the opportunity to be here, watching the tide rise and fall in the canal. It’s been a fantastic place to meet the local community and other creatives.

I’ve organised several drop-in workshops with fellow artist Robert Hawkins. Our craft activities have been great hook to draw people in for discussions about the importance of species diversity.

A major outcome of this residency for me has been the development of my ideas towards creating a permanent artwork in the Greenway, with a focus on rewilding urban green areas.

I’ve spoken to many locals who have expressed sadness that fairy wrens and Christmas beetles are disappearing from their back yards. I’ve been surprised that many residents are unfamiliar with the local colony of Bent-wing Micro Bats, nor aware of the many different native bees that live on the Greenway.

After talking to University of Sydney University ecologists Professor Dieter Hochuli and Dr Catherine Price, I decided that I’d like to raise awareness of the tiny endangered species that reside in the Greenway precinct, including the Bent-wing Micro Bat, and create sculptures that celebrate them. These sculptures will also work to support many of the local wild species by creating havens and mini-habitats, using both garden elements and sculptural elements.

As the ecologists explained to me how threatened species in urban areas rely on ‘stepping stones’ of rewilded areas throughout cities to survive, it struck me that there is an important educational opportunity to pursue in the Greenway. If residents were more aware of the many species in their neighbourhoods, such as the Bent-wing Micro Bat, and each of their important roles in healthy ecosystems, they may be more inclined to take action to preserve and extend precious habitat.

I’ve been designing Bent-wing Micro Bat inspired sculptures with weathered steel in mind – it’s a sturdy material that can be laser-cut to create beautiful, open sculptural pieces that allow light and rain to penetrate to the sheltered plantings. The steel also creates gorgeous shadow play that would extend across a parkland.

The sculptures I am creating would be integrated with garden and stepping-stones in order to provide useful cover for species such as wild birds, lizards, protecting these vulnerable creatures from predation.

As well as the Bent-wing Bat, I’m also referring to other insects and native grasses as reference points for my work. I’m hoping that Inner West Council will adopt these ideas into its parkland development proposals and also develop a nature trail.

Selecting appropriate tree plantings and the right types of grasses that will be beneficial to the local wildlife will be critically important, so I intend to talk to both landscape architects and ecologists about the best approach to pursuing these ideas.

Given the rich stories to tell of the species that inhabit the Greenway, I’m also looking to design interpretive material that will communicate the importance of rewilding not only this place, but other patches of urban green space to parkland users.

My aim in this project is to educate people about the wildlife in their neighbourhoods, in particular any threatened species that reside there, and what they can do to extend habitat corridors from public space into their own back yards.

I want my sculptures to be beautiful and fun, and am above all creating places for locals to meet and play. I also anticipate working with schools in the area and incorporating student artwork into permanent installations.

In my experience as a community artist for several decades, community-led cultural projects can really help communicate scientific ideas.

Through wildlife-inspired sculptures, I hope to help create greater community connection with and ownership of the Greenway parkland, as well as focus attention on relevant ecology issues.

It’s my intention that the bat sculptures I create will be replicable: hopefully, every parkland in Sydney will want to develop similar art-science projects that tell rich stories of the wild creatures that reside in our precious urban bushland.

Merran Hughes is creating sculptures that focus and engage the attention of park-users on urban wildlife and their habitats. This could include powerful owls, microbats, insects especially pollinators, reptiles, amphibians and small mammals such as rakali and long-nosed bandicoots.

Urban wildlife populations are struggling due to predation, light pollution and loss of habitat.  That’s why Merran plans to develop artworks that will create shelter for smaller animals to counter these issues.

Merran is using nature-informed sculpture to develop a range of ways for park users to interact, enjoy and learn about urban wildlife and art, in person and online. Community conversations and ecological studies of local species will inform her sculpture design and creative research.

The lino cuts Merran created as part of the EDGE Inner West Art Camp at the Greenway illustrate the creatures that inhabit this urban green space. They are intended to communicate the food web of the Bent-wing Bat. The lino cuts will be used by Kegworth School as part of an art project relating to the Greenway’s wildlife.

Merran is now researching how to translate the linocuts into bronze. Her intention is to then install them on the Greenway permanently, so the sculptures form part of a nature trail that will help communicate ecological ideas to parkland users, encouraging them to protect and value the remnant wildlife of Sydney’s Inner West.