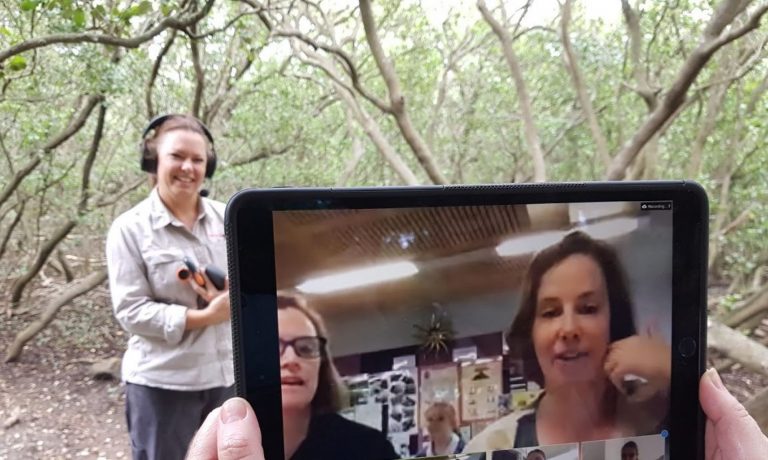 NSW science event presenters are set to take Australia’s national celebration of science online due to the COVID-19 pandemic. Running from 13 -22 August, National Science Week 2021 is an opportunity for scientists to engage with the broader community and share their research knowledge in all kinds of engaging ways.

Among this year’s line-up are a wealth of entertaining virtual experiences to be enjoyed from home, from a masked ball, comedy shows and science art workshops to a science film festival, expert panels and lively debates from NSW Universities around the issues of our times including climate change, sustainability, vaccinations, biotechnology and mental health.

“We’re fortunate in NSW through the Inspiring Australia strategy to collaborate with a talented network of science event producers,” said NSW Chief Scientist & Engineer Professor Hugh Durrant-Whyte. “They have been able, at very short notice as lockdowns came into force, to create engaging virtual programming such as the Sydney Science Trail developed by the Royal Botanic Garden Sydney and the Australian Museum, and From Swamp to Scrub produced by Greater Sydney Parklands.”

“Each of these major online programs presents entertaining digital content targeting children from the earliest years though to teenagers and adults. Among this year’s themes are the future of food, STEM careers, diversity, ocean science and sustainability.”

In a novel twist, this year’s programming will extend to the online platform Twitch, a platform where millions of young people gather online to watch video games being played.

“It’s great to see Sydney Science Trail’s producers make National Science Week relevant to young people who may not ordinarily engage with science,” said Professor Durrant-Whyte, adding that a hallmark of NSW’s approach is to take science where people go.

“There are only so many of us who’ll watch experts as they give lectures,” he said. “That’s why including science-themed video games, virtual lab tours, live-streamed comedy and science you can do outdoors or in the kitchen is so effective in reaching new audiences.”

Sydney Science Trail features a dedicated schools’ program that will be broadcast by the NSW Department of Education, which also joins forces with Inspiring Australia NSW to present a Q&A session open to all schools with Australia’s favourite science writer Dr Karl.

Those seeking a more serious serve of science will not be disappointed.

“Among the dozens of online discussions you can join throughout the week to connect with leading experts are those addressing Antarctic climates, STEM cells and bioprinting, space weather, robotics, future medicine and marine science to loneliness, addiction and Indigenous scientific and cultural knowledge.

“By making science accessible to thousands of community members in National Science Week, you participate in the critical national science engagement strategy to raise awareness of the important work undertaken by Australian scientists to solve the world’s most pressing problems while contributing to Australia’s prosperity and wellbeing.”

A number of regional producers will also contribute to NSW’s extensive science week program, including by delivering online art and animation workshops to animate Canowindra’s famous Devonian fish fossils, a series of sustainability events presented as part of the Sapphire Coast Science Festival and several events in NSW libraries that explore the theme: The Science of Us.

All welcome to join the National Science Week launch event: Science of Recovery, Resilience & Renewal. This special celebration hosted by Science Technology Australia includes high-profile scientists who’ll discuss the path forward as the nation navigates its way out of the challenges of bushfires, the ongoing pandemic, a changing climate and extreme weather events. 11 am, Thursday 12 August 2021.
Register to attend

Feature image courtesy of Sydney Olympic Park. Inspiring Australia is the national strategy for public engagement with science technology and innovation. National Science Week is its flagship campaign, running each August since 1997.