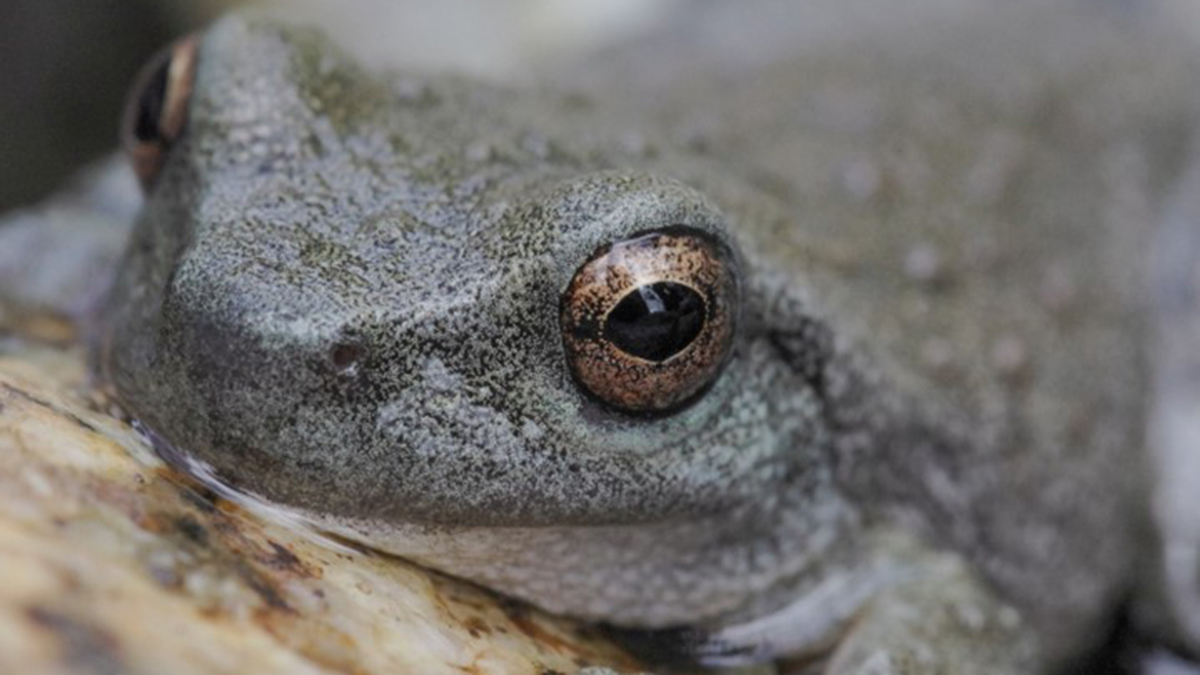 With environment matters often front and centre in the news these days, it’s easy to get caught up in the doom and gloom when thinking about our native plants and animals. But it’s not all bad news! To help you feel good heading into the festive season, check out these 12 amazing outcomes the dedicated Saving our Species (SoS) team and their fantastic partners have achieved this year. In no particular order.

The first two releases of zoo-bred plains-wanderers (Pedionomus torquatus) in New South Wales were an exciting and crucial step towards the conservation of one of Australia’s most threatened bird species.

Ten plains-wanderers were released onto private properties in the Western Riverina in March, and a further 15 were released into Oolambeyan National Park in September. The second release saw the first use of tiny, solar-powered satellite backpacks to track plains-wanderers in the wild to help researchers understand more about this elusive bird.

Good habitat management and the success of the breeding program are conservation in action and represent a step towards ensuring the future of these birds.

The Wild Orchids Project reached a major milestone this year as Saving our Species and project partners conducted the largest orchid translocation in Australia to save three endangered orchid species from extinction: the sand-hill spider orchid (Caladenia arenaria), Oaklands diuris (Diuris callitrophila) and the crimson spider-orchid (Caladenia concolor). More than 6,000 native orchids were propagated by the Royal Botanic Gardens Victoria and then planted around Albury and the NSW Riverina by passionate volunteers from the Australasian Native Orchid Society and the local community.

The planting (translocation) sites were chosen using scientific research and local knowledge to locate the best habitat for these species to thrive.

The Wild Orchids Project is a collaboration between Saving our Species and the broader Department of Planning and Environment, Local Land Services, NSW National Parks and Wildlife Service, Royal Botanic Gardens Victoria, the Australasian Network for Plant Conservation, Crown Lands and the Forestry Corporation of NSW.

The frogs were released into a purpose-built field enclosure to support the population to grow and thrive. The species has been badly affected by the amphibian chytrid fungus and habitat loss due to invasive species, drought and the 2019–20 bushfires.

A successful breeding program has resulted in an insurance population of approximately 400 frogs.

An amazing multi-agency conservation operation saw an Australian-first interstate translocation of 17 eastern bristlebirds (Dasyornis brachypterus). The birds were successfully translocated from Booderee and Jervis Bay National Parks in south-eastern New South Wales to Wilson’s Promontory National Park on the most southern tip of the mainland in Victoria. This was the first component in a planned three-year operation that will see between 50 and 60 birds in total moved into Wilson’s Prom from New South Wales and Croajingolong National Park near the NSW–Victoria border.

The effort to help establish a second population of this critically endangered species in Victoria is a very complex and delicate process, particularly as the birds are known to be prone to stress.

Creating a new genetically viable population in a secure area of habitat is part of long-term plans to mitigate the impacts of climate change on the species and is being conducted with the support of multiple Commonwealth, New South Wales and Victorian government agencies, along with some of Australia’s foremost bird conservation experts, traditional owners, rangers, land managers and researchers.

The first ever insurance populations of the endangered nightcap oak (Eidothea hardeniana) were planted in the wild. Forty seedlings of the Gondwana-era tree species were planted across 8 secret sites to increase the species’ population and distribution across the NSW North Coast. The nightcap oak is significant to the evolution of the ancient rainforest. However, 20% of the only known wild population was impacted by the 2019–20 bushfires.

Saving our Species has been working in partnership with Firewheel Rainforest Nursery on the project, collecting more than 500 seeds for propagation, with 50 seedlings successfully grown. NSW National Parks and Wildlife Service has also collected cuttings to improve the genetic representation of propagated material, which is being grown at the Australian Botanic Garden Mount Annan.

A lucky number for some! A total of 13 smoky mice (Pseudomys fumeus) were released back into the wild in South East Forest National Park in a world first for this critically endangered species.

The smoky mouse plays an important role in the ecosystem by helping to keep forests healthy through aerating the soil, increasing water penetration and spreading truffle spores, yet fewer than 100 smoky mice are left in the one location they are known to occur in the South East Forests National Park.

The mice were bred for conservation by Priam Australia’s National Threatened Species Institute in a specialised facility which replicates the species’ preferred habitat in the national park, and remote cameras and micro-chip readers have been set up around the release site to keep an eye on the progress of the mice in their new home.

The conservation of the smoky mouse is led by Saving our Species and the reintroduction, which was supported by the Australian Government’s Bushfire Recovery for Wildlife and their Habitats program, is part of a broader project to rewild 7 feral-free areas across New South Wales.

Summer rains resulted in a continued record-breaking streak of high numbers of the endangered superb midge orchid (Genoplesium superbum) being found across the Southern Tablelands.

Prior to the 2019–20 bushfires, only a handful of the miniature, raspberry-scented orchids had been recorded. Since 2020, over 300 plants have been discovered across 3 sites, thanks to increased rainfall and the fires reducing grazing opportunities for herbivores.

This past year saw Saving our Species invest $100,000 for orchid conservation in the Southern Tablelands to support threat control and to continue surveys and monitoring to help secure this species.

A total of 100 critically endangered spotted tree frogs (Litoria spenceri) were released into Kosciuszko National Park after the population was decimated in the 2019–20 bushfires, reducing to an estimated 10 frogs.

A captive-bred population was released in 2015 into a specially selected chytrid-resistant site after the species became extinct in New South Wales in 2001 due to the chytrid fungus. This population of frogs had been proving successful until the devastating bushfires.

This second chance for the species has been made possible with the support of bushfire funds provided by the Australian Government and a captive breeding program at the Amphibian Research Centre in Melbourne.

A total of 50 critically endangered regent honeyeaters (Anthochaera phrygia) were released into the wild as part of an ongoing breed and release program to help boost the species’ wild population.

This is the second release conducted on Wonnarua Country in partnership with the Mindaribba Local Aboriginal Land Council, who made their land available. This program is particularly special given the cultural connection shared by the Mindaribba community to this threatened species, which has lost song culture vital for the species’ survival. Returning the regent honeyeater to Country has powerful parallels with the struggles of the local Aboriginal people and their fight to protect their land and reawaken their language.

This Saving our Species project is being delivered in partnership with Taronga Conservation Society Australia and BirdLife Australia.

Protecting one of the world’s rarest trees

Work is continuing on ground-breaking conservation techniques for one of Australia’s rarest trees, the Mongarlowe mallee (Eucalyptus recurva), also known as the ‘ice age gum’. There are currently only six trees in existence. However, Saving our Species, in partnership with the Australian National Botanic Gardens in Canberra, is working on methods to increase this number.

Hand pollination as well as special grafting techniques to propagate the species are being conducted, which it is hoped will lead to the development of an ex situ population of the plant so the species can be studied further. It is also possible it could one day become a garden plant like the Wollemi pine.

A state-of-the-art facility to support a captive breeding program for the Booroolong frog (Litoria booroolongensis) was created and almost 60 frogs from this rare and endangered species have taken up residence in the new facility.

The species’ population was almost completely wiped out in recent droughts and bushfires. A project team made up of experts from Saving our Species and the broader department, Taronga Conservation Society Australia, and the Australian Museum’s Dr Jodi Rowley and ecologist Phil Spark developed the program and the design of the facility. The purpose-built space will replicate the natural environment for Booroolong frogs, including special UV lighting, flowing water, and temperature controls to mimic seasonal changes.

Saving our Species took advantage of an emergency services training operation in Budderoo National Park to undertake surveys of the threatened and rarely seen waterfall greenhood orchid (Pterostylis pulchella), with National Parks and Wildlife Service, NSW Police Rescue, the SES and NSW Ambulance crews allowed safe access to the national park’s remote canyons, where the native orchid had last been seen around 7 years ago.

The 10-hour expedition resulted in approximately 300 orchids being recorded and provided the team with the information needed to develop management plans and minimise threats to the species’ survival.

12 wins for conservation in 2022 news story by the NSW Government’s Saving our Species program originally published by the NSW Department of Planning and Environment, 9 December 2022.