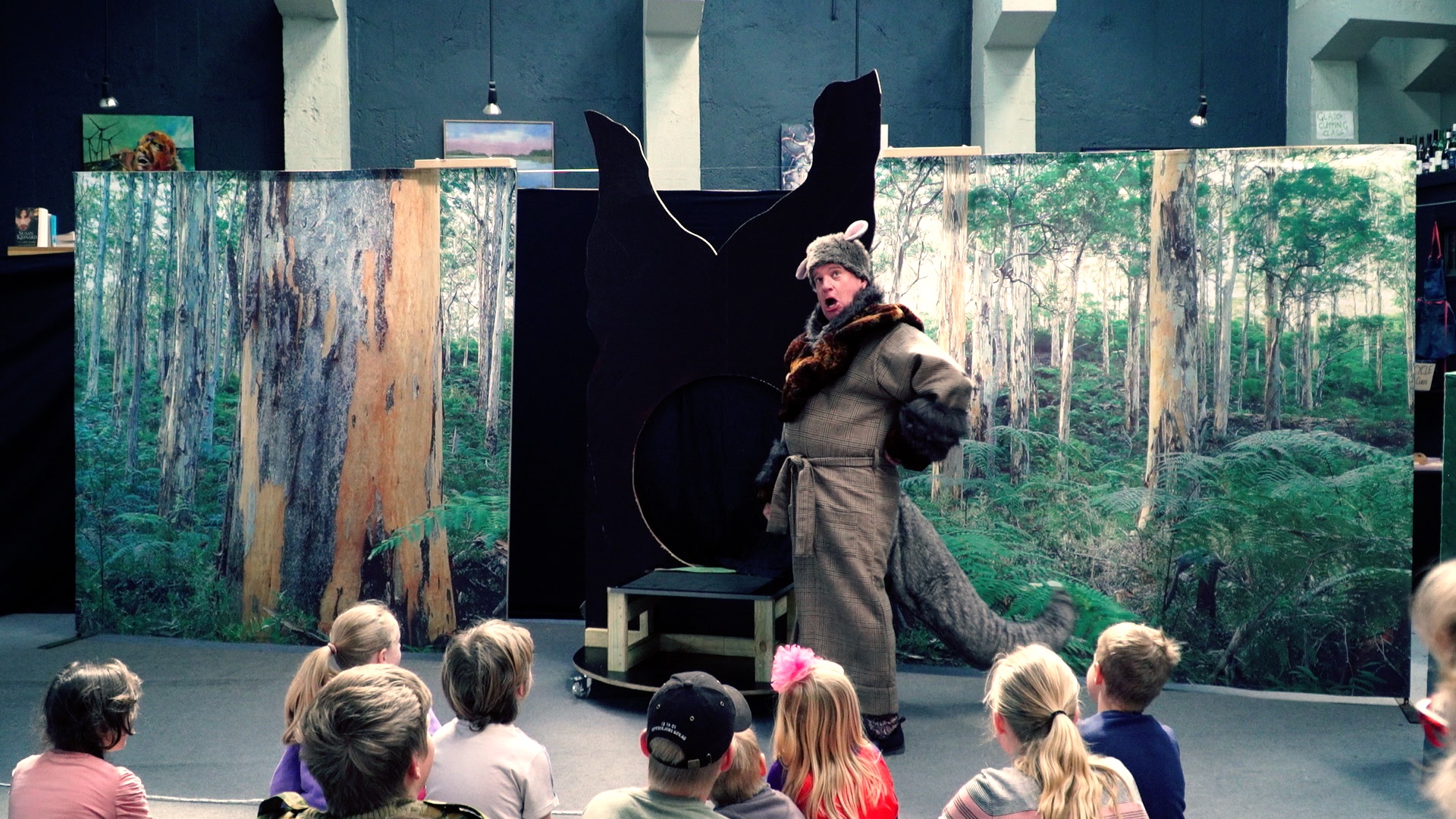 Murray Arts is over the nocturnal moon to be partnering with Eaton Gorge Theatre Company and local Squirrel Glider champions from around the Murray region to produce and present the world premiere tour of an interactive performance, Gliding into the future. This family-friendly production about the region’s local Squirrel Glider population will be performed for the first time in three locations from 11-12 October 2017.

Join the fun and learn all about the life of the Squirrel Glider at one of the free performances to be presented at Savernake Hall, Burrumbuttock Hall and QEII Square Albury.

Gliding into the future is an initiative of the Murray Science Hub who, with the support by Inspiring Australia NSW, invited Eaton Gorge Theatre Company to roam the lush surrounding farmlands of Burrumbuttock. The company worked with local organisations to develop a script based on information provided by:

The script development stage concluded with a trial run performance at the Sustainable Activity Centre in Wodonga. Home school students were willing participants as the first preview audience!

Gliding into the future encourages audience participation, interaction and even a chance to perform in some of the scenes. With the aim of improving awareness around the plight of the survival of the local Squirrel Glider population, Eaton Gorge discovered that Squirrel Gliders live in treetops, are nocturnal, native to Australia and are a threatened species.

This interactive style of performing arts is a great vehicle for inspiring young people to gain an interest in science as they learn unique and interesting facts in imaginative and engaging ways. The performance cleverly disseminates information, encourages a change in behaviour and also makes the audience feel actively involved in finding and developing solutions to the problems facing this threatened species.

Murray Arts: Vegemite or honey?
Eaton Gorge: Vegemite, unless I’m a squirrel glider at the time and then it would be honey!

Murray Arts: What inspired you most about our Murray region on your research tour to develop Gliding into the future?
Eaton Gorge: It’s so green and lush.  Love the rolling hills, the fresh air and the lovely historic buildings.

Murray Arts: What has been one of the highlights or unexpected discoveries in developing the performance ‘Gliding into the Future’?
Eaton Gorge: I have loved meeting all the people involved with the project. They are all so passionate and inspiring.  I have learnt a lot about local ecology and the walk on the stock route was incredible, walking in the bush with a mob of Kangaroos was an experience!  Ian and I always get very excited when we see a possum run over a main highway.  We never noticed them before and I was amazed at how far a squirrel glider can glide!  70 metres is a long way!

Murray Arts: What can the audience hope to expect? Any spoiler alerts?
Eaton Gorge: A fun interactive and entertaining show that will teach them some interesting facts….don’t want to reveal too much!

Murray Arts: What would be Eaton Gorge’s dream project?
Eaton Gorge: This one!

Savernake
6pm Wednesday 11 October 2017 – performance begins at 7pm with an optional community BBQ prior to the show. RSVP Email: marengopark@bigpond.com