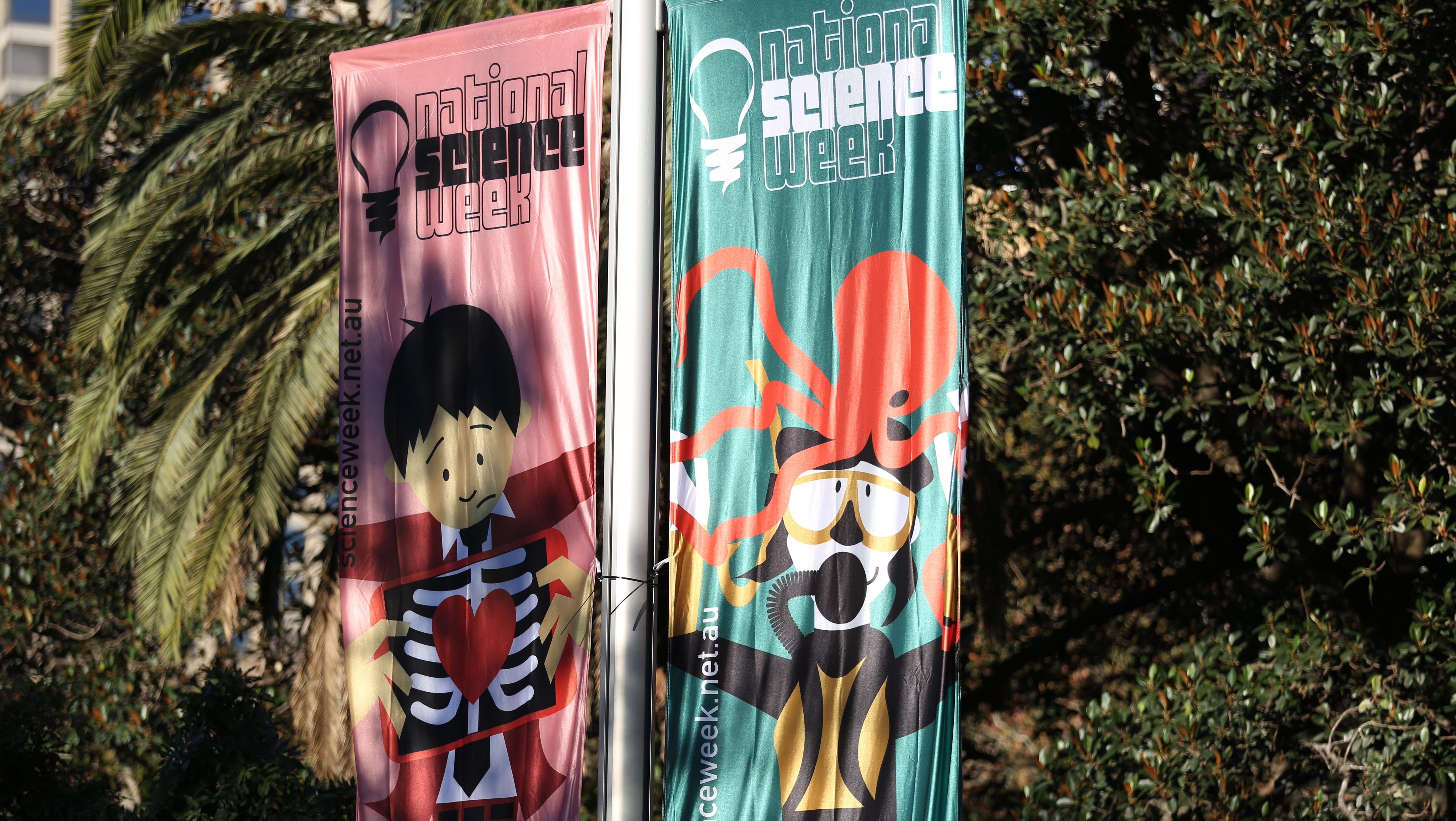 Following a fantastic launch event in Springwood with the NSW Chief Scientist & Engineer Prof Hugh Durrrant-Whyte at Science at the Local on Sunday 4 August, National Science Week is now underway in New South Wales. There are almost 500 activities and events on offer for the community to enjoy across the state, including these events supported by Inspiring Australia NSW.

Inspiring Australia’s Talking Science series with the NSW Library network is designed to engage people who may not have participated in a National Science Week event before, taking science and scientists to where people go. Throughout August, there will be research talks, film screenings, coding sessions, SciArt competitions, panel discussions and hands on activities in more than 70 libraries across the state, involving over 120 scientific researchers.

As part of Sydney Science Festival, Sydney’s universities have each developed a suite of outstanding science engagement offerings on campus and at venues across the city to connect researchers to the public and celebrate scientific research and teaching in National Science Week.

Science in the City

Science in the City is the biggest National Science Week celebration of science for schools. Taking over Australian Museum from 6-15 August 2019 with interactive workshops, shows, and a speciality Expo, Science in the City also offers community and teacher PD activities as part of its 2019 program.

Why music is Maths

This free lunchtime event on Wednesday 7 August at City Recital Hall presents leading mathematician Professor Geordie Williamson and a classical guitarist who together will delve into the shape of sound and sound waves to explore the fascinating world of timbre, overtones, modes and frequencies.

Science in the Wild

On Sunday 11 August the Australian Botanic Garden at Mount Annan presents Science in the Wild. Batman, Spiderman, Wonder Woman, or Cat Woman – we all know about their fantastic strength and abilities. But did you know you can find fantastic superpowers in the Australian Botanic Garden? Discover the amazing superpowers you find in nature. The incredible roving Dinosaur will be coming back as well and show you a bit of pre-historic fauna.

On Sydney’s north side, a series of art/science events and competitions has been presented in libraries and community centres over the past few weeks. This community project led by the Northern Sydney Science Hub will culminate in a free, family festival on 17 August where there will also be science demos and shows at the CSIRO’s stunning Linfield facility.

The Innovation Games at GWS Stadium will again bring science to sports fans attending the AFL game at Sydney Olympic Park’s Spotless Stadium on 18 August. This free family fun day in partnership with rising champions the GWS Giants will be full of sporting, science and technology action.

All welcome to this free celebration of the environmental sciences at the Royal Botanic Garden Sydney on Sunday 18 August. Learn something new and connect with leading plant and environmental scientists. There will be stalls, talks, demonstrations and diverse scientists at the ready to address your burning questions.

Take a trip through time to the ancient land of Gondwana in a fantastic family day of hands-on science fun at the Blue Mountains Botanic Garden, Mount Tomah on 17 August. Hunt for virtual reality Australian dinosaurs and megafauna with the Jurassic Garden app; watch reptile and dinosaur shows; and see and learn about furry animals, frogs and tadpoles and plant science.

Science in the Swamp

On Sunday 18 August head to Centennial Park to find fantastic science superpowers. Join scientists at their stalls and they will show what amazing superpowers you find in nature. Super sight, super hearing, super strength and camouflage are only some of the capabilities you will discover. The incredible roving Dinosaur will be coming back as well and show you a bit of pre-historic fauna.

Join the 2019 Eureka Prize finalists, the National Indigenous Science Education Program, at Redfern Community Centre for a diverse range of interactive science activities accessible to all ages. Activities will include: yarning with Elders on bush foods and medicines, Indigenous astronomy, 3D printing workshops, maths puzzles, making Aboriginal tools, physics and chemistry activities and much more! Meet Indigenous Elders and student leaders from the National Indigenous Science Education Program who will be assisting in demonstrating the activities on Sunday 18 August.

Be a scientific illustrator

Learn how to draw both animal and plant species on 18 & 25 August from 10am – 4pm at Penrith Regional Gallery. Presented by Nepean Science Hub, CURIOUS Art & Science returns in National Science Week with two exciting Scientific Illustration Workshops led by Angus Fisher, a natural sciences illustrator and Lecturer in Fine Arts at the National Art School.

Roam with the dinosaurs at Mount Tomah

Take a trip through time to the ancient land of Gondwana for a fantastic family day of hands-on science fun at the Blue Mountain Botanic Garden on Saturday 17 August! Discover the time of the dinosaurs and explore the lives and habitats of their reptile descendants at this fun-filled family day. Enjoy venomous snake & dinosaur shows plus get hands-on making your own free dinosaur fossil, become a poo-detective and discover different types of flying seeds. See & learn about furry animals, frogs & tadpoles. You can even explore Australia’s megafanua in 3D with our Jurassic Garden smartphone app.

Kooky, wacky, weird and wonderful. DARK SCIENCE is a new freaky festival of fun that will occupy Lismore Quad after dark on Fri 16 and Sat 17 August. Set during science week, DARK SCIENCE is a celebration of the intersection between dark provocative art, performance and the sciences – for adults!

Chemistry in the kitchen, Indigenous science, gaming technologies, and FUTURE WORLD are just some of the activities planned across Wagga Wagga for the Riverina Science Festival. Explore gaming, data visualisation for agriculture, technology and entrepreneurship, virtual reality and the role of science edutainment. The National Indigenous Science Education Program will also embrace both modern chemistry and ancient Indigenous science of stone tools and weaving. Kitchen Science, Storytime and an Environmental Walk will complete a week welcoming activities.

A day of science in a paddock with farm robotics, ecological walks and talks, and a look at local farm inventions. Drone challenges, planting with drones, a look at future farming, and a science film night at the historic James Theatre. Guerrilla science in the street, and the science of fermentation and a science trivia night at the Tinshed Brewery. These are all part of the Paterson Allyn Williams Festival of Science Stuff—a lively, four-day array of demonstrations, lectures, discussions, happenings and shows across multiple venues that will bring science to life that’s relevant to both locals and visitors. Includes A FREE day of wonder in a paddock at Allynbrook. The future of agriculture from the soil to the skies.

Eight different events will be presented across a range of Hunter locations including in a winery, at the Botanic Gardens and as part of full day of exciting activities at the Newcastle Museum. A highlight will be Bots and Barrels at the Ben Ean Winery, Pokolbin, and a full day of hands on science at the University of Newcastle.

Pygmy Perch 360 is an immersive, 5-minute, short film experience that was developed by the Murray Science Hub in 2018 to highlight the plight of the threatened local Pygmy Perch. Screened entirely in the round, using a KMART trampoline frame and rear projection technology, audiences are able to enter the world of Pygmy Perch and truly learn about the species struggle. This year the beautiful 360 film will visit the NSW towns of Holbrook, Tumbarumba and Corowra with free events and talks presented by scientists and artists about habitat loss.

The third Illawarra Flame Festival will be held in Science Space with guided walks through Puckey’s Estate and Bark Bingo tours of local vegetation. Other activities will include a presentation by the local RFS using modern technology and planning including drones to assist with firefighting, a presentation by the physics department at UOW, Science of Fire shows from Science Space interns, live animal displays , flame tree propagation workshops by the Wollongong Botanic Garden, a presentation on how fire affects local vegetation, a theatrical performance and characters interacting with the audience and looking at how fire affects native fauna and lots more.

Habitat Corridors will present three workshops in the Southern Tablelands in July and August, and a public forum and exhibition to explore habitat and its role in protecting our precious wildlife. The workshops will be an immersive science and creative interactive workshop process looking at the local endangered species held in conjunction with NSW OEH, Landcare and the K2W Link.

A series of activities will be on offer in the region including pub nights and citizen science activities. A highlight will be a BioBLitz at the Bega River (including for schools). Several public events will also be run by local Science Hub members for the whole community to celebrate science on the Sapphire Coast.

Among events in the Central West will be the Curation of a Herbarium at Canowindra CWA, looking at biosecurity and specimen management by the NSW DPI Herbarium; Botanica Galari (Lachlan) a Wyangala/Lachlan River illustration and flower pressing workshop by a botanical illustrator; Ecologies in the Landscape, workshops led by OEH scientists; Abstracted Ecologies in Clay, Encaustic Painting and a field-trip at the CORRIDOR project. Also on the program will be Planet Organic: Astronomy and DJ beats, a night of music and stargazing at Darbys Falls Observatory and the SCINEMA film festival presented in Orange, Canowindra and Cowra.