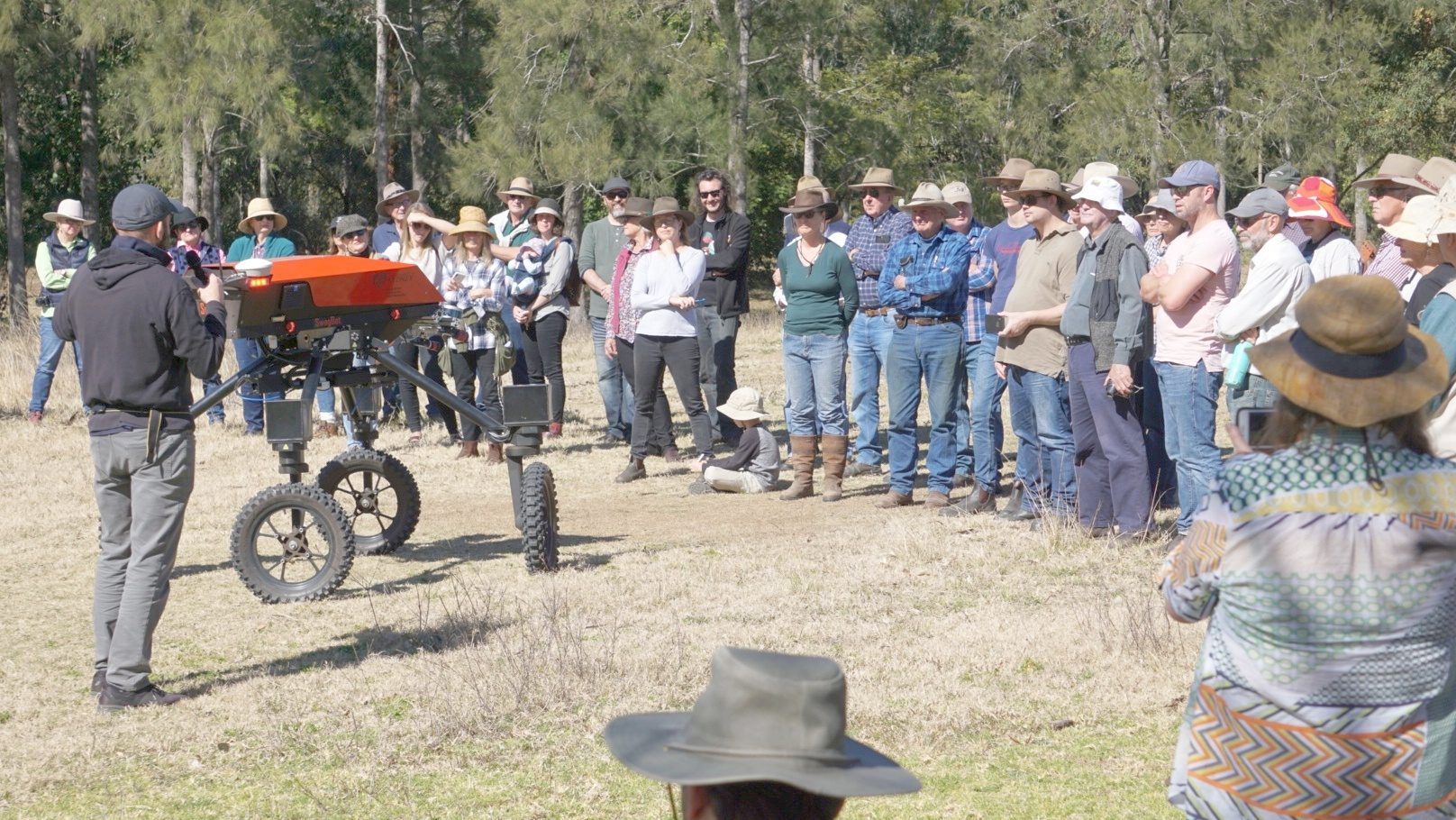 The Paterson Allyn Williams Festival of Science concluded with Future Paddock, a field day devoted to a range of agriculture related topics – all concerned with new and innovative ways of doing things at Bonnington, the Kater family property at Allynbrook.

The first session began with a thoughtful outline of the sort of things that led to changes in the past and then questioning what the effect of current changes will be on farms in the future.

This was followed by a fascinating demonstration of the Swagbot “as seen on TV” from the Australian Centre for Field Robotics at the University of Sydney. The display demonstrated the cleverness of robots slowly “evaluating” their terrain then getting up speed when the going is straightforward.

Back in the shed that served as the Future Paddock conference centre, Professor Salah Sukkarieh and his team described the enormous range of jobs robots are being trialed for on farms. These include:

Videos showed the range of heights in which robots can operate from ducking under low branches to inspecting treetop fruit. For the technically minded there was an explanation of the construction, design features and capabilities of a range of different bots.

The University of Sydney team is also helping young people to understand the future possibilities of careers in farming, by introducing robots to selected schools including Dungog High School as of next term. A career in IT and a career in farming may soon be the same thing!

Next up was Angus Johnson who gave a short engrossing chat about the main processes required to make a really good compost. In the lunch break there was lively conversation as people shared ideas and discussed issues while enjoying a coffee from the mobile van.

Then came the drones. Alex Kondilios and Harrison Shalhoub from Sphere Drones discussed the advantages of the many types and the great variety of uses for them. They showed four very different drones. Drones are doing more and more amazing things, such as flying below tree canopies and collecting data in confined spaces. They described the techniques used to ensure accuracy of location and explained how different cameras are used as requirements vary. There was a plethora of questions and the only disappointment was that we couldn’t see them in the air.

Forget bush regeneration: ecological restoration is the current standard in the increasingly important task of regenerating our forests, according to Alex and Roechelle from Biological Preservation Australia. This informative talk took place out of the hot shed and under shady creek-side trees.

Alex explained the complexity of ecosystems and the need to bring back their genetic diversity. In a rough oval wallaby-proof enclosure (with no straight sides or corners wallabies can’t work out how to get in) he described the advantages of species such as the giant stinging tree to protect the undergrowth from roos, Bursaria spinosa to attract native bees, and Pittosporun revolutum and bleeding heart (Homalanthus populifolius) to attract birds.

A group of volunteers helped plant 17 important rainforest trees and shrubs, using a deep-stem method: long-stem planting involves digging a hole to a depth of up to 1.2 m, making a muddy slurry with water, adding pre-expanded water crystals (dry crystals will “steal” moisture from the soil and roots), and a teaspoon of native-tree fertiliser. Leaves are removed from the part of the stem that will be below the surface and the plant is then ready to go into the hole followed by back-filling and more water to make more slurry, to prevent airlocks. The volunteers got their hands muddy but everyone learnt lots.

There followed a pleasant walk back to the shed for the final session, and what an inspiring session it was. Annabel Kater talked about the observations, research and management techniques she and her family have evolved over the years under the Regenerative Agriculture approach.

On this property in the 1970s the usual farming practices included the use of superphosphate, annual burning and constant tree clearing. By the 1990s these practices had been replaced by rotational grazing. This depends on small paddocks with short periods of rotation of cattle between them. The length of rotation times depends on the rate of growth of the pasture.

As a result, species such as native vetch are reappearing and kangaroo grass is flourishing while blady grass and bracken are in decline. Giant Parramatta Grass remains a big problem and Annabel looked at the techniques they had tried and the ones they hoped to try next. Blady grass thrived in the past because annual burning left the rhizome undisturbed ready to shoot after burning. Now increased stock density means that bladey grass gets trampled.

This talk was an excellent way to end the day. People left the scene of all Annabel’s great work, full of ideas and with a feeling of great gratitude to the Kater family for the very rewarding use of their property, and a fitting end to a Science Week program that proved a perfect fit for our rural, innovative, changing, beloved shire.